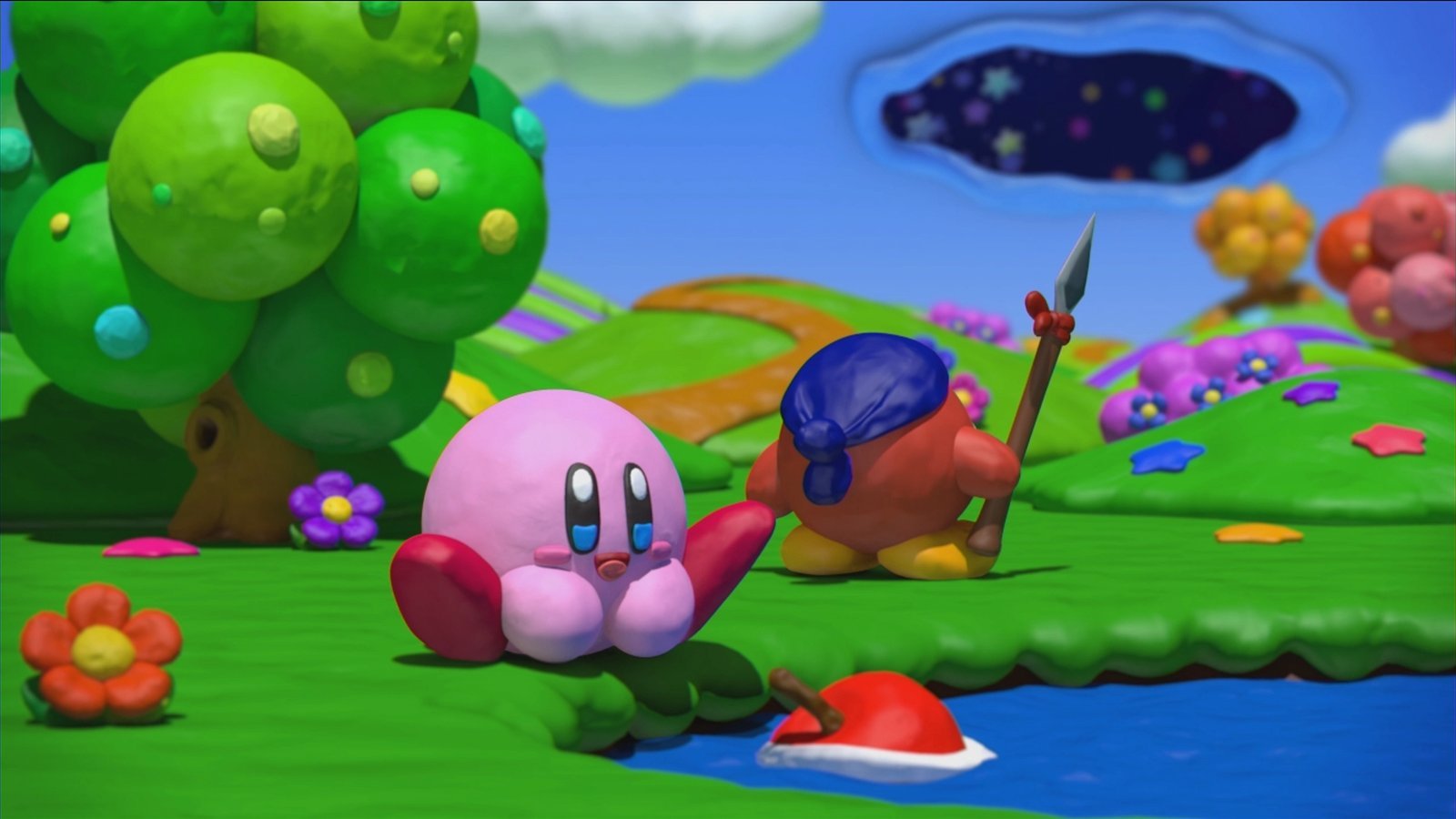 Kirby and the Rainbow Curse Review

For a series usually representing the lighter side of platforming, Kirby and the Rainbow Curse elicited a strangely high amount of profanity, and by the end, I was both hooked by its creative game mechanic and half-vowing to never play it again. Alternatingly satisfying and frustrating, the game contains an array of levels that are at times cleverly designed, at others maddeningly so. It is Nintendo’s attempt at utilizing the gamepad in new, rewarding ways, and the results are somewhat mixed across the board.

The minimalist story has a hungry Kirby in the relatable position of chasing a nice, ripe cherry down the green hills of his fantastical Dreamland home. When a rift in the sky opens, a magical rainbow beam sucks all the color from the world, making Kirby adorably sad. With the help of a sentient paintbrush, Kirby sets out to find the two dismembered hands who are naturally responsible and restore Dreamland to its former glory.

The gameplay in Kirby and the Rainbow Curse revolves around controlling the rolling pink puffball on the gamepad touchscreen by drawing rainbow lines with the stylus that guide him along. They also perform other various functions, such as creating protective barriers and revealing areas hidden by sand or clouds, which are simply swiped away with a brushing motion. Kirby for the most part maintains some momentum, so the skill comes from managing his speed and providing a safe path through the level. As someone who never played Kirby Canvas Curse on the DS, this lack of direct control seemed odd at first, but it didn’t take long for me to get in the swing of things, and soon I was performing loop-de-loops with ease, tapping Kirby to give a quick speed boost and winding my way through the first world, collecting stars (100 of which activate a special power) and uncovering the many hidden treasure chests scattered about.

I was enjoying the vibe of these early levels, very Kirby-like in their breezy feel. It was far from the no-consequence attitude of Kirby’s Epic Yarn, but no more difficult than the pleasant trip that was Triple Deluxe. But whereas that game maintained its easy-going until close to the very end, Kirby and the Rainbow Curse begins to show some teeth much sooner, ramping up the difficulty and simultaneously exposing some flaws. Challenge in platforming games is often achieved by requiring precision, both in timing and execution. This is can be extremely tough without direct control, and the fickle nature of Kirby’s movements means numerous deaths and level restarts, even with a clear idea of how one should proceed. This was no more apparent than on an infuriating boss battle in which the last form was beaten by pure luck (disappointingly, the bosses all repeat, and even the second time I had to rely on a fortunate bounce to move on), and in a sky world where one missed rainbow line meant death.

Still, there are levels and enemies that complement this mechanic very well, and while one stage may have had me restraining myself from throwing the controller across the room, the next would keep me engrossed in enjoyable puzzle-solving and exploration. I’ll admit that I don’t care for auto-scrolling, and most of the levels that had me gritting my teeth involved this kind of un-Kirby-like pressure, but the free, open worlds where I got to actually play with Kirby and his mechanic, bouncing him around and contriving ways to get him where he needed to go, kept me happily coming back. Falling only meant trying again without the tedium of a level restart. Experimentation at one’s leisure; that’s how I picture the Kirby experience. These were the times when I really got what Nintendo was trying to do with Kirby and the Rainbow Curse, and the game really clicked.

Vehicle segments were similarly fun, offering unique ideas that I wish were exploited more often, and they were welcome in their creativity. Kirby can take the form of a tank, which has the player tapping on missile targets, a submarine whose torpedoes must be guided and a rocket needing ushering in the form of rainbows. These levels demonstrate how touch controls can work extremely well and can provide different play experiences. I looked forward to and got a kick out of each of these, and if Nintendo ever decided to make an entire game around that submarine, I wouldn’t object.

The Clay Look is Gorgeous

The entire game is available to play in drop-in, drop-out multiplayer, which lessens some of the difficulty, with extra players controlling Waddle Dees with actual button presses and no effect (as far as I could tell) on Kirby’s lives. Some extra challenges are tossed in exclusively for this mode, mixing things up a bit so as to keep levels and boss battles fresh. This was an agreeable addition to the game, allowing for a bit of help and some time to relax, though there may be arguments over who gets a regular controller and who has to draw.

The game can be finished in about 6 or 7 hours, but I never felt like I was being shortchanged in any way as to content. There are numerous time challenges unlocked by beating main quest stages, as well as a bevy of collectibles, from treasure chests that unlock music and clay figurines displayed in a gallery to pages from the paintbrush’s diary, images recounting the adventure. A special mention must be made of Kirby and the Rainbow Curse‘s visuals, which on your HD television look absolutely stunning. The clay seems tactile, and the movements of enemies and in backgrounds suggest a stop-motion quality that is absolutely charming. Unfortunately, single players will be staring primarily at the gamepad screen, and so will miss much of the gorgeous detail. This can feel like a waste at times but can be solved in multiplayer or by simply watching someone else play. It’s worth it.

Overall, the player’s experience with Kirby and the Rainbow Curse will depend heavily on their enjoyment of the core mechanic. If you loved Canvas Curse then there’s probably plenty for you in this iteration. I could never quite grow to love the stylus controls, yet there is an addictive quality when they work as planned, and even after completing the game, I’m tempted to return to its colorful clay world. And swear. A lot.