Punch Club feels like something that should’ve been great. The game’s opening cutscene tells the familiar yet enthralling story of a rookie fighter trying to follow in his father’s footsteps and become a fighting champion. Along the way, he tracks the mystery of his father’s death and follows clues to find the killer. The protagonist is a working class guy who lives in a rougher part of town, sleeps on the couch in his cramped studio apartment and works in construction. The gritty atmosphere of Punch Club is one of its greatest strengths–it really makes the player feel like they’re struggling to survive in a vintage New York City, and the graphic style conveys that perfectly (despite some laughably stiff animations).

The other strengths of Punch Club are its catchy chiptune soundtrack and offbeat storytelling. Some songs shine brighter than others–the title track is especially enjoyable, and the upbeat tunes that play during fights give life to the otherwise bland bouts. The writing and characters are right out of a Rocky movie with all of the stereotypical tropes present and accounted for–but not in a bad way. Nonsensical advice-giving mentor? Check. Creepy guy who hangs out in the sporting goods store and offers to sell you “potions?” Check. Sure, it gets a bit old when Apu, the convenience store owner, tells you “You look stronger than yesterday” even when you didn’t work out, but it still has its charm. The Dark Fist story arc comes out of nowhere and is a fun diversion from the main goal of climbing the ranks of the fighting world. It’s a wannabe vigilante side story with just the right amount of campy humor. The game has a lot going for it on the presentation front and, animations aside, has a solid amount of gloss for a budget package. 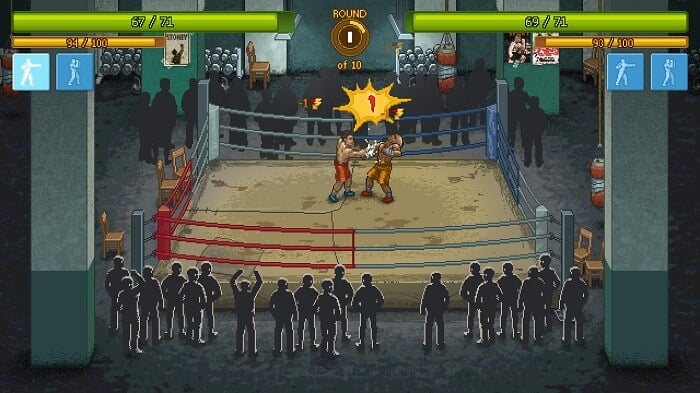 Unfortunately, struggling isn’t limited to the storyline. There was rarely a moment that passed where it felt like the game wanted me to succeed. More often than not, it felt like I was actively fighting against it. A small part of this is due to the completely unnecessary touchscreen control options, but the majority of the frustration comes from how the training mechanics of Punch Club affect its light sim elements.

Punch Club is a boxing life simulator. The player directs the character through all of his daily activities: training, working various jobs, buying food at the grocery store, watching TV, you name it. Like The Sims, Punch Club features meters that deplete over time as these different activities are carried out: Health, Hunger, Happiness and Energy. Players also have to monitor training-specific gauges that are vital to succeeding on fight days. These gauges measure Strength, Agility, and Endurance, and deplete daily unless the player makes strides in those areas. So if a couple in-game days are spent earning money–which is needed for food, access to the local gym, fast travel, and other expenses–much of the gains made in these three areas will be lost.

Juggling all of these different gauges (as well as money) is at the core of my gripe with Punch Club. Spending time in the gym and focusing on improving certain attributes is fun and feels rewarding, but after a minute or two I become too hungry to train. So I have to go to the store, stock up on food, and then go home where I can eat said food. Only seven of each kind of food is allowed in the fridge at once, and it takes two steaks to fully replenish the Hunger meter, so only three full replenishes can be stored at a time. Then I need to sleep to fill the Energy meter. Sleeping brings Hunger down. Before I know it, the day’s ended–and there go the day’s gains.
Some of this stress can be alleviated by careful planning: work for a few days, save up money, stock food, buy home gym equipment and then have a few days of uninterrupted training before a fight. As soon as I tried this method, though, I was mugged in an alleyway on my way home from work. I tried to run, but wasn’t fast enough. The mugger was way stronger than my character, and when I inevitably lost, he took half of my painstakingly saved money.

The worst of all is what these pains lead up to: poorly animated, completely automated fights. The player has no control over the actual fighting, only in selecting preset techniques. There’s a bit of strategy involved to be fair: fighters who train primarily for Strength benefit from using moves that require raw power, whereas those who focus on Agility have a higher rate of dodging and those who champion Stamina can absorb more hits. The game encourages you to focus on one area and master it, a much more favorable alternative to being a master of none. And the variety of moves available becomes quite large as you progress through the game. No matter how you cut it, though, the matches would’ve felt much more exciting if they were controllable. As is, all you can do is watch and hope your fighter lands a few more punches than the computer.

Sometimes it truly feels like Punch Club is fighting against you, and not in a fun, challenging way. The race to juggle everything before the end of the day is both stressful and tiresome. It can be occasionally rewarding to manage it all, but it usually doesn’t feel worth it. Accumulating enough money at once to not have to work for a few days (and focus on training instead) is impossible without losing significant progress on the fighting front. Does this mimic the real life struggles of some fighters? Possibly. But it does not transfer well to a video game.