In Octopath Traveler, the player is given a tremendous amount of freedom. They can choose 1 of 8 characters to start with right from the beginning and can proceed throughout the game’s story in the order of their choosing. Want to recruit all 8 travelers before starting the adventure in earnest? Absolutely fine. Feel like completing an entire storyline before even meeting another traveler? Go wild, lunatic. Stick with the same four travelers for their entire campaigns and then basically replay the game with the other team of four? Easy. It’s this kind of choice and nonlinear experience that many players crave when starting up a new game. It’s also this exact freedom that renders Octopath Traveler incapable of telling a complex and engaging narrative.

Each story mission in Octopath is tied to one of the travelers, who must be present in the party to progress the chapter. The other three party members can comprise of any combination of the remaining seven travelers, including none at all. This means every story mission has more than 50 different party configurations. It would be impossible to write specific dialogue and individualized situations based on all possible combinations.

Other games, such as Mass Effect, have interchangeable party members use interchangeable dialogue. Characters who aren’t necessary to the story mission at hand will say similar things at similar points in the conversation. This makes it seem like they’re still an active member of the story and dialogue despite not doing anything different than anybody else would in their shoes. Another option is used by Persona 5, which is to have narrative reasons for every party character to be in every important cutscene. This way if the story needs Haru to talk, she’ll always be there.

Octopath relies on a different approach by having party members straight-up vanish during any story mission that isn’t theirs. If Tressa, Olberic, Cyrus, and Ophilia engage in a conversation with somebody from Cyrus’s storyline, all but he will leave, and the game will move forward as if Cyrus has been traveling alone this whole time. Party characters don’t interact with each other at all besides in short side conversations that happen about three times per mission. 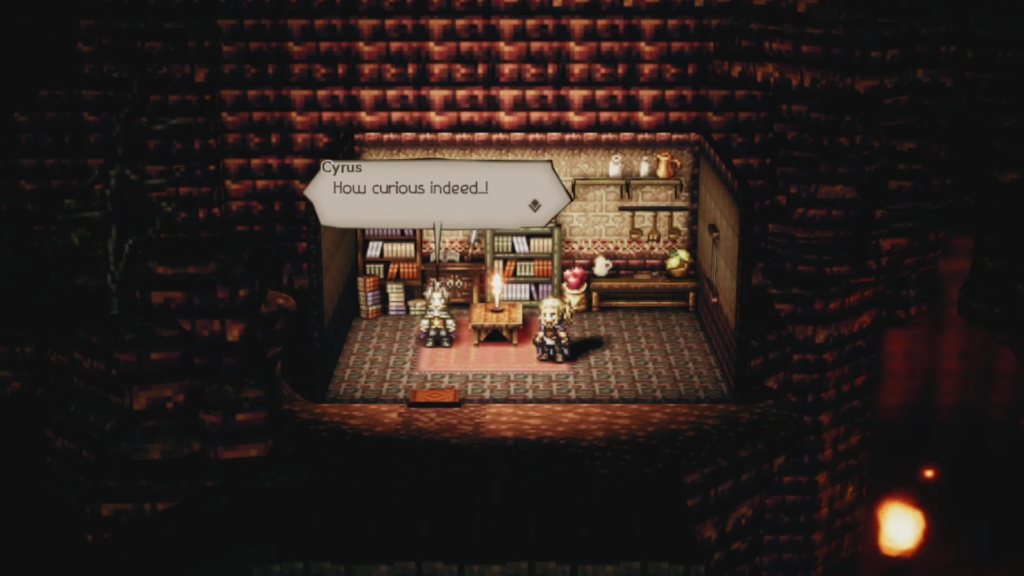 If you look carefully, you can see 3 people hiding silently behind Cyrus right now

Thus, Octopath Traveler doesn’t tell a story of eight unlikely friends traveling together and helping each other with their individual goals of revenge or adventure. It’s eight completely separate stories that are only part of the same game so that the player will have a whole team instead of just an RPG of one. Missions are played in no predetermined order, so some characters can complete full character arcs before the others can even start. There’s no interparty conflict, no stories overturned by party member interference, and no segments where the strength of one member can help overcome the weakness of another.

If H’aanit needs to fight a giant bear, the story plays out with her alone regardless if she’s accompanied by Olberic the Legendary Warrior or Tressa the 15-year old merchant. The game mechanics themselves will often fill in these narrative gaps, like one point where the player can use Cyrus’s investigate skill to find weaknesses in Olberic’s opponents before his duels. However, all dialogue and character interactions that result happen only in the player’s imagination. The game ignores them outright. As a result, Octopath Traveler can’t tell an immersive story because there’s no structure to it. Story elements must be basic enough to fit in any order, and therefore the overall narrative isn’t interesting enough.

We can compare this to Persona 5, a more linear JRPG. In this game, characters join in a specific order and their stories play out as part of the ongoing narrative rather than at the device of the player. The characters in Persona 5 talk to each other constantly, confer with each other as to how to proceed, and even offer unhelpful suggestions to personal problems on occasion. The story progresses because certain characters disagree or have special talents that can help the team proceed. The narrative is a specific order of events, which means characters grow and change with each other and not independently. 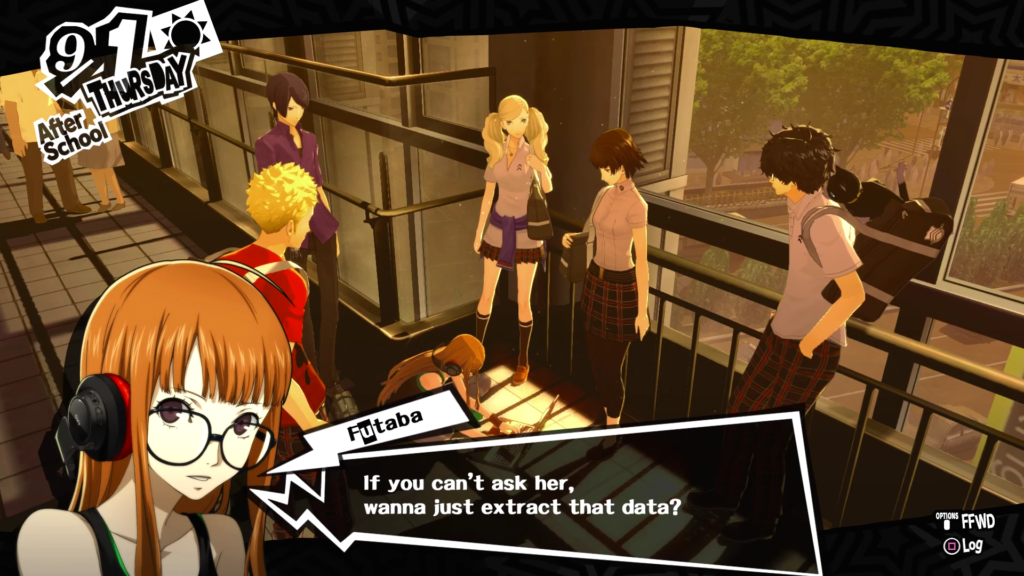 Here is Futaba helping Makoto with a problem, something that would never happen in Octopath

Persona 5 isn’t constrained by the player’s ability to dramatically change the order of events and the actors present in cutscenes. Players of that game have applauded its memorable character interactions and constantly developing story. The narrative feels like it was crafted instead of just thrown together in a random order. Octopath Traveler has 30-second dialogues between party members and eight different stories that could have been told in eight different games without any issue. There’s no feeling of camaraderie outside of press material and fan art. Olberic won’t ever acknowledge Therion’s existence if they aren’t in the same party.

Player freedom is important, and it’s one of the things that separate games from the rest of media. But when player freedom goes overboard, other parts of the game are sacrificed, and the story is usually the first to go. This article doesn’t even delve into how messy it is to balance a game’s difficulty when the order of encounters is effectively random, another problem that plagues Octopath Traveler. An argument can be made that Octopath Traveler isn’t interested in telling a single narrative; It’s structured this way because it wants to feel like it’s telling 8 separate stories. Regardless of its intention, however, the story is still detached from itself and the characters barely talk to each other. Sometimes it’s just not worth letting the player run wild if it means they’re running into a narrative clutter.