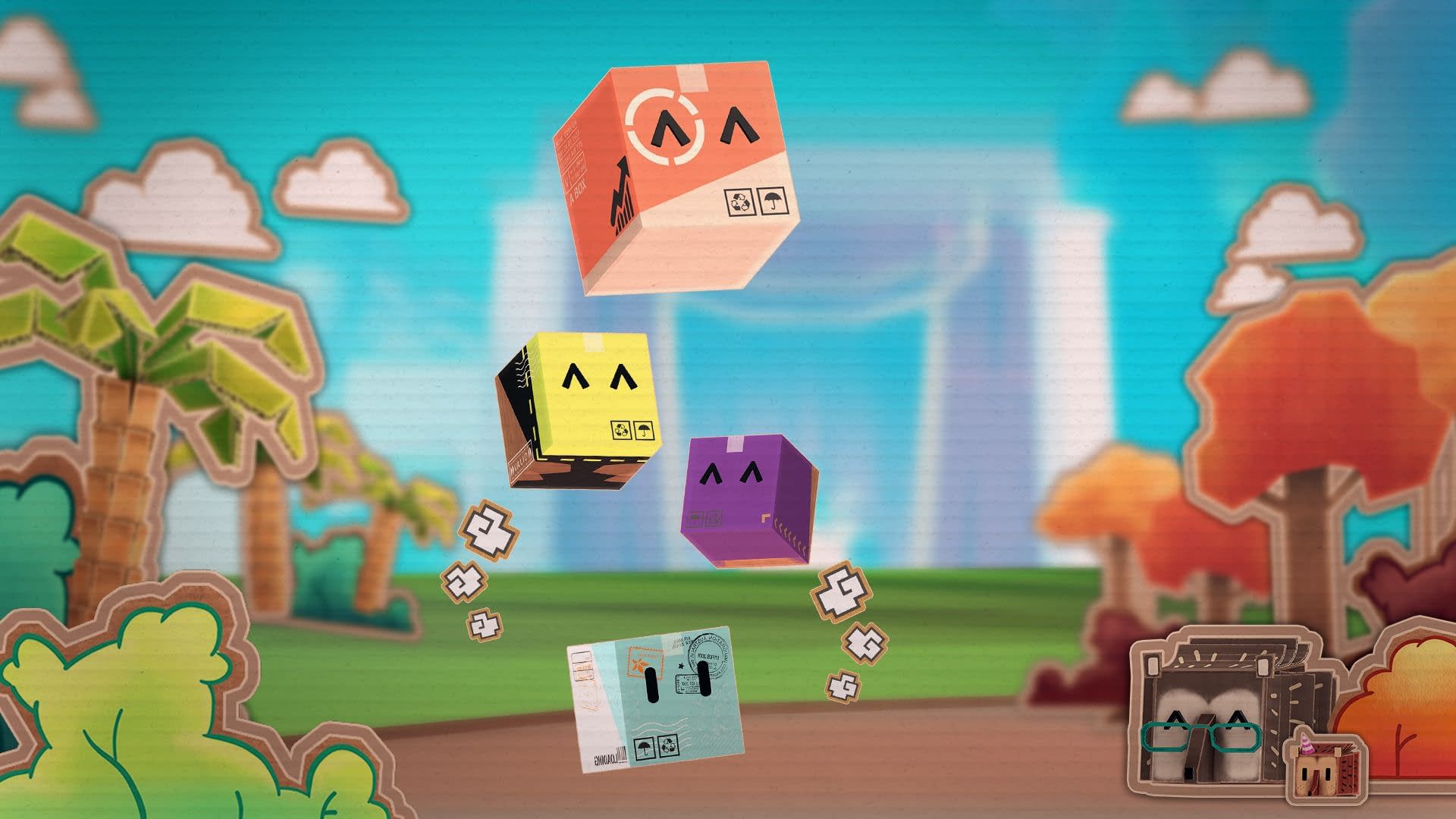 Out of all the new puzzle games that 2021 has to offer so far, Pile Up! Box by Box from developer Seed by Seed is both a solo and cooperative delight worth looking out for. While it may lean in on a casual audience as it provides a challenge adaptable for all ages, the newest platformer published by HandyGames is by no means a simple enigma to crack. Pile Up! unloads a short albeit enticing package that will be played differently depending on whether the player chooses to ride alone or with friends. It is a partial collectathon that delivers on the majority of its promises.

In the same fashion as other papercraft stylized games such as Yoshi’s Crafted World, Pile Up! Box by Box yields a mild focus on story as it stays directed on providing charming visuals and meticulous gameplay. The game opens on a cutscene where the world of the Boxlings is engulfed with a mysterious grey energy that turns the hub world into a colorless empty mold of its former self. After that, the story is never touched on again as players are thrown right into the action. As the Boxlings, your job is to solve the problems of the local inhabitants so your home will spontaneously regain its lost charm and spring with life again.

The Boxlings are capable of performing four different actions: jump, dash, carry and unload. As the player learns the technicalities behind moving boxes in the tutorial, they will understand almost everything they need to complete the game. To keep the puzzle-solving and standard mechanics fresh, each world introduces a new type of box capable of a special ability. At its core, while there is quite a bit of platforming, puzzle-solving is the focus. There are 400 yellow cubes to collect along with secret circles that unlock hidden routes in each world, but cracking every case in the player’s path is always at the forefront as it is the only need for progression.

Pile Up! was designed to feature a room-to-room format that relies on experimentation. If the player happens to mess up a puzzle, they can reset the current “room” by simply holding down the left and right triggers simultaneously. The majority of the game’s puzzles can be completed in multiple ways. While it was designed to be single-player, utilizing a cooperative mode allows users to breeze past the normal obstacles if they efficiently work together. The single-player and multiplayer experiences of Pile Up! are completely different fields. As the former requests individual players to think carefully with what is available, the latter lets a party go wild by using each other.

While moving and dashing feel great, the camera’s positioning and jumping can often interfere with the player. Depth perception will usually be an issue with a locked camera in a platformer, but the jump mechanic can feel flat-out unreliable. Jumping can sometimes be rather frustrating as players may find themselves lacking accuracy. Pile Up! has quite a few secret tricks up its sleeve in terms of control, but the jump mechanic could have undoubtedly used some minor touch-ups in terms of its timing and pressure. It may not be anywhere near unplayable, yet it can become bothersome when the game will just not cooperate with the player on some of the more difficult challenges.

Pile Up! may also run at a buttery smooth framerate and high-definition resolution across all platforms, but there can occasionally be a few technical bugs with the puzzle functionality. Sometimes the buttons within a puzzle can randomly stop working or not function at all when moving over them. Thanks to the aforementioned “reload room” button combination, fixing the issue is never a hassle. Even then, it is rather strange that these problems occur with quite a few elevator-style puzzles.

The gameplay may not be perfect, but where Pile Up! does thrive is in its adorable aesthetic that presents a cut and clean papercraft-like world. Similar to the aforementioned Yoshi’s Crafted World, Pile Up! takes on the characteristics of a diorama-inspired atmosphere. The majority of its locations and objects are crafted of cardboard, but the game does take some liberties to feature some paper origami-like elements that help enhance the world’s visualization of environmental details. It is always a joy to look at as the game’s blocky theme as it is consistently nailing and cozy and playful habitat.

On a side note, the Boxlings customization deserves mention as it provides players with an extra dash of individuality. From standard cardboard and mail envelopes to sushi rolls, televisions, and watermelons, the character outfit swaps are all nothing short of great as Pile Up! dips further into its wackiness. There are not many costumes to unlock from the in-game shop, yet what is here is entertaining for both single-player and multiplayer segments.

Speaking of extras, Pile Up! offers one additional multiplayer mode containing four mini-games. Strangely, it has to be unlocked throughout the main campaign by solving specific off-route puzzles, but the reward is worthwhile. It is odd that these mini-games are compensations for the player’s exploration efforts, yet they are a fun bonus — albeit one that probably should have just been available from the moment players enter the game.

Whether you are playing by yourself or with three friends, Pile Up! Box by Box packs a great time. The game’s usage of its core mechanics never grows tiresome as it attempts to blend its array of boxes storing unique properties with its ample platforming. If developer Seed by Seed were to polish the main jumping mechanic and perhaps add its multiplayer mini-games to the main menu, Pile Up! would likely be as ideal as it can get. It may be enjoyable to play singleplayer, but for those picking up the title, get some friends delivered to your home because Pile Up! is more of a cooperative blast.