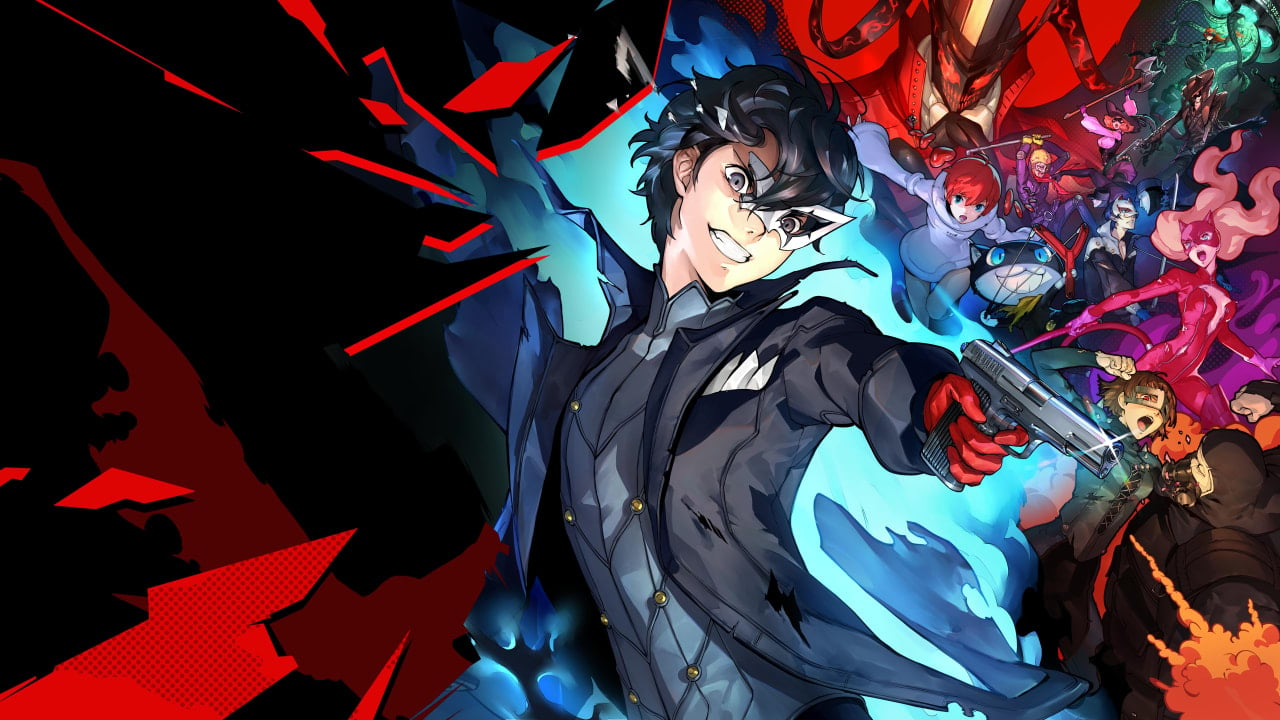 After saving the world, dancing in the stary night, and competing with Nintendo’s all-stars through one ultimate slam fest, the Phantom Thieves’ next calling card is certainly worthy of being read by more than just their biggest foes. Back and ready to steal your desires, Joker and the gang’s latest enchanting adventures across modern Japan in Persona 5 Strikers is nothing short of a great comeback for the law-breaking heroes of Atlus’s 2017 award-winning masterpiece. If Persona 5 was able to change your mind (or perhaps more appropriately, your heart) on the current landscape of JRPG’s with its morally fascinating story and stylish visuals, then its action-driven followup may just do the same for the genre of role-playing Musou games as it dives headfirst into reinventing Dynasty Warrior’s famous shtick by summoning personas into the mix. While it may not be the direct follow-up fans would expect upon an initial examination, Persona 5 Strikers is as lookin’ cool as it is playing. It presents a comedic and heartfelt road trip that, like any other traveling adventure, is forced to carry some unwanted baggage to each destination but inevitably provides an entire camper of delight.

From Shibuya to Osaka, the time to strike back at the heartless of Japan is nigh!

Without any spoilers, Persona 5 Strikers takes place the summer after the Phantom Thieves of Hearts saved their world from an impending catastrophe brewing at the center of Shibuya. As their leader was sent back home and the crew faced their futures, one foiled summer vacation plan is able to unite the friend group once again for more metaverse infiltrating action. The overarching narrative may come off as something more humorous and fun-driven as the story seems to initially lack depth when The Phantom Thieves begin city-hopping stopping tyrants, but rest assured there is a larger purpose to Persona 5 Strikers plot that will not let fans down. For those looking for a full-on sequel to the story of Persona 5 that will further push each of the main character’s personalities and motives further, you should lower your expectations as the group here is already lifetime friends with evidently developed stories. The comedy and relationships are on-point as ever as the wisecracking cast remains as lovable as before, but where the game’s character development and original ideas thrive most is with its newest players.

Humanity’s companion A.I. Sophia and inspector Zenkichi Hasegawa blend right into the cast with ease as each presents critical roles in kickstarting the ragtag team’s latest adventure. As the former takes on a position similar to Morgana’s initial purpose story-wise, the latter presents a narrative piece that multitasks being different from the other thieves yet a perfect fit. The original cast members are all given standout moments over the course of Striker’s plot, but ultimately it is the new heroes who provide the heart and soul of the game’s overarching narrative. While perhaps the villains are nowhere near as iconic or memorable as Persona 5’s original evildoers, the unexpected threats throughout Strikers are still welcome additions alongside the minor characters. Its several twists and turns along the way are still as brilliant as ever, however, to expect something on par with that first story is simply impossible. While its story is strongly reminiscent of Persona 5, it is clear from every angle that Strikers is out to do its own tricks and pull out its own unique trump cards.

As to be expected with Persona spinoffs, unlike the mainline entries in the series, Strikers does not stick to turn-based strategy and hawk-like persistence over the events of an extensive though confined calendar. As stated before, Persona 5 Strikers is a Musou-styled game that focuses heavily on the main activities you conduct in all other Warriors titles; slash and smash through massive groups of enemies until they are dead all while handling some light role-playing game mechanics. At its core, Strikers’ gameplay seems to be a replica of the vast majority of other Musou games; however, once the player begins to sink their teeth into the main mechanics of the game pulled over from Persona 5, the adrenaline rush and thoughtful execution really begin to shine. Strikers is quite literally Persona 5 translated into another genre of role-playing games. The JRPG turn-based combat system of Persona 5 and its Royal update has been excellently translated into a fast-footed action-paced format.

Despite the heavy baggage it is forced to carry, Strikers still manages to hit many of the Musou formula’s problems with a technical follow-up.

As you slash your way through dozens of shadows in the newly established Jails (this game’s replacement for Palaces) Joker will be able to collect masks, create dozens of personas, and buy various items from each city’s hub-worlds. Outside of using your typical swords and knives, personas add an entire layer of gameplay to the Warriors formula as careful usage of when to drive a defensive or offensive plan of attack constantly come into play. Between using guns, wielding handheld weapons, pulling out personas, baton passing, and slamming down enemies with beautiful showtime attacks, Strikers manages to cram in every gameplay detail from Persona 5 Royal with seemingly no problem. On top of the joy of being able to customize Joker, every single cast member from Skull to Zenkichi is playable with their own unique styles of action as they are all accommodated by their own manifested beings. That intricate planning in the turn-based combat of Persona 5 never goes underutilized in Strikers– in fact, it is satisfyingly used to the game’s advantage.

Strikers may reinvent the standard Musou formula by “Personafying it,” but that does not mean the game escapes the same reoccurring problems all titles in this gameplay style suffer. Of course, sometimes strange camera focus, too much to concentrate on at once, computer assistance that can be a pain, and repetitive gameplay will flood Persona 5 Strikers like any other Musou game. Luckily, however, these issues never become too massive due to how environments are designed along with how your companions utilize their abilities during battle- especially when it comes to those computer-assisted companions. Where Strikers really struggles in comparison to its predecessor is a constant flow of originality. Whereas each Palace location in Persona 5 offered unique ways to explore and venture into the hellish minds of criminal masterminds, Strikers can often skimp on variety when it comes to tasks. Exploring the Jails is surely a blast, but it is a shame that there is no visual identity when it comes to that actual exploration. Going from location A to B, crawling through the same dusty silver vents, and the occasional climbing might be placed in different atmospheres, but at their core, they never strive to do anything drastically distinct from one another. Not being able to have many of its predecessor’s quirks and shines, though, is sometimes a blessing.

Persona 5 Strikers may lack its original entry’s calendar system that every mainline title has utilized since the third entry, however, that careful time incentive has still somewhat remained intact in an appropriate matter. While you can spend an unlimited amount of time in each city you visit, once you leave that location, you can never go back to it. It may not require as much in-depth thinking as before, but keeping track of what exactly you need to purchase or complete in each city is a nice nod to a staple aspect of the series. Similar to the calendar’s situation, the lack of confidants in Strikers is also resolved here by the introduction of a new Bond system. By proceeding through the story, completing various side requests, and simply battling the player will obtain points through a level-up system that can be used to obtain features typically achieved through the Persona series’ many confidants. Gameplay-wise, this replacement makes perfect sense, however, not having those conversations with your friends that had to be earned does certainly feel desired. It is by no means a fault of the game, but the lack of confidant conversations is something that fans will miss.

While this may come off as a nitpick, if there is one aspect where Persona 5 Strikers struggles to capture the incredible architecture of its predecessor, it has to be in the sound design- although the current circumstances of the world are likely to blame for this as the voice actors have pointed out. While the soundtrack of Strikers is absolutely incredible, the mixing of its orchestrations, dialogue, and effects all at once can be surprisingly cumbersome at times. Perhaps this may just pertain to the western release as the game’s dub had a struggled production amongst the current pandemic, but the sound mixing can often come off as irritating as specific lines of dialogue fail to close properly as they slowly fade out or, worst of all, when the music is just too damn loud to hear what characters are saying. Once again, had the world been in a normal state there is no doubt in my mind that the sound mixing would not have been problematic, but as it stands the final product is disappointingly sloppy in this category. With such an amazing cast of voice actors and composers, it is upsetting that the dub came to be this way, but it is not a huge deal and is understandable at the very least.

Strikers is a showtime attack worthy of The Phantom Thieves’ return.

Persona 5 Strikers may not act as a direct full-blown sequel to its magnificent predecessor when it comes to its story, but the Phantom Thieves of Hearts are still back to take an absorbing victory lap through their home territory. Packed with the same lovable characters, incredible tunes, and entertaining albeit moderately repetitive gameplay, Persona 5 Strikers is never a letdown as it aims to give its remarkable cast of icons another chance to shine through one action-packed summer vacation. Its biggest desire is to succeed upon its award-winning counterpart, but in reality, its purpose is to continue to entertain audiences with what it does best- and Strikers does exactly that. It will be obvious to any diehard fan of Joker and the gang’s original story that the same developers at Atlus are not steering the whole ship behind this follow-up, but that never hinders Persona 5 Strikers from being a compelling experience that is just as fun to watch as it is to play. It may not be able to achieve the exemplary bar previously established by its magnificent predecessor, yet it stands its own ground as it provides more of what you want from the world of Persona 5 in a new combat style. It is a stylish showtime attack worthy of being called a proper strike back.