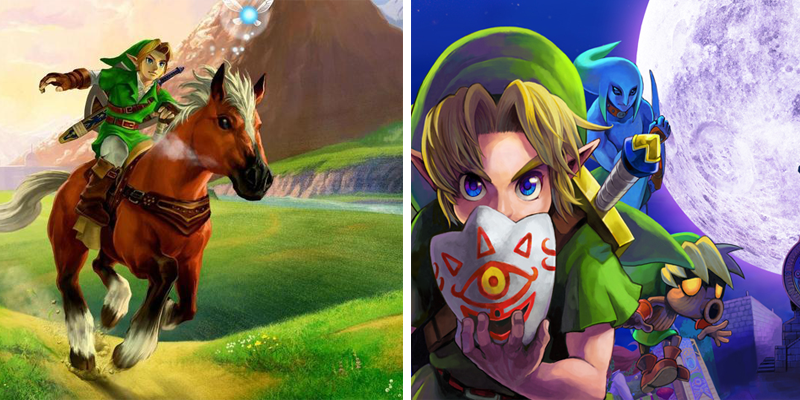 Ocarina of Time has such a soothing opening. Link is woken from his slumber by a hyperactive fairy named Navi who claims he’s been summoned by the Great Deku Tree. Still sleepy, the boy steps out of his treehouse into a bright and refreshing morning in Kokiri Forest, which is populated entirely by evergreen children and their accompanying guardian fairies. He spends the following hour practicing backflips and avoiding rolling boulders. Somewhere along the way, he finds a hidden sword, with which he trims shrubs and impresses bullies. He also buys a shield – a smart investment for the future. Meanwhile, around him float strange, translucent particles. It’s all so, so beautiful and peaceful. Yes, before lunchtime, he’ll end up fighting a gigantic spider-thing with a fluorescent eye. But the days off to a great start!

In Majora’s Mask, the sequel to Ocarina of Time, there’s no bucolic idyll. After vanquishing evil in the earlier title, Link sets out to look for Navi, who has fluttered off somewhere. He tracks the fairy down to the Lost Woods, where he instead encounters the mischievous Skull Kid, who leads Link down a hollow tree trunk, transforms him into a small plant urchin, and deposits him in the fantastic land of Termina, which, as luck has it, is about to be incinerated by an angry moon. What some video games call their tutorial or training stage, Majora’s Mask calls A Breathless Race To Prevent the Apocalypse and Regain Your Human Form.

Link had acquired many things in Kokiri Forest: rupees, weapons, respect. In the Lost Woods, he relinquishes all he has: his face, his body, his skills, his gear, his musical instrument, even his horse Epona. Majora’s Mask, more than any other video game, is committed to its role as a sequel. It assumes that players, veterans of Ocarina of Time, have already learned the controls and grown accustomed to the graphical engine, so it skips the throat-clearing and drops players straight into the drama. Unlike many Zeldas, it’s the immediate continuation of its predecessor, both in terms of narrative and technology. It looks the same, it moves the same, and it includes many of the same assets and characters. Reportedly, the development team had barely one year to complete Majora’s Mask, which might explain this degree of unapologetic recycling. Yet it also serves the theme: everything is familiar, save different. In short, the very definition of uncanny.

Take, for instance, the rhyming structures of both games. They begin in small villages or towns and, after a few hours, transition into vast fields. Yet these thrilling moments of discovery, apparently identical, are in fact rather unlike each other. Link stumbles into Hyrule Field in Ocarina of Time after traipsing about the cozy paths of Kokiri Forest and crawling in the entrails of the Great Deku Tree. When he leaves the womb of these claustrophobic areas and runs into the outlying grasslands, he glimpses the hints of future trials: a volcano to the east, a castle far ahead, a ranch. The horizon stretches into telescopic distances, the heart stirs. He’ll never really go back to Kokiri Forest. Oh, he might pass through it on his way elsewhere, like the Lost Woods, and sure, if players save their session anywhere other than a dungeon during the early parts of the game, Link will wake up in his treehouse – only to sprint back to Hyrule Field on the double. The endorphin rush of exploration, for a while, makes him forget his home until he returns years later and finds it cursed, no longer the little hamlet he remembers. What he leaves behind, more than Kokiri Forest, is his childhood. It’s the typical hero’s journey: the small-town boy who becomes a man by involving himself in the troubles of the planet or the galaxy at large, as seen in Star Wars, The Hobbit, and Princess Mononoke. 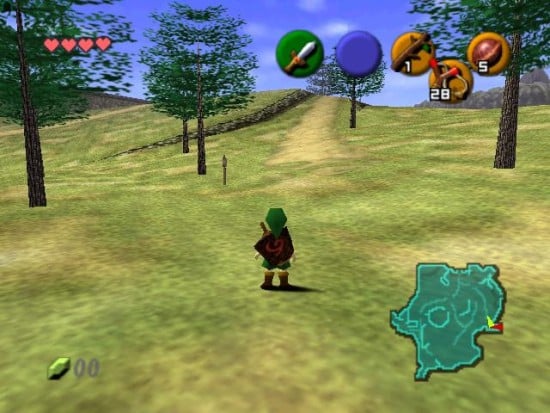 Termina Field is not nearly as meaningful for Link because it doesn’t mark a comparable turn in his life. Even after crossing it, he goes back, over and over again, to where he started out, to the urban hub of Clock Town. Not only will it be the stage of his final battle with the Skull Kid, it’s also simply a happening place: tragic love stories, drunken anecdotes, pickpocketing, organized crime, street music, political rivalries. You name it, Clock Town has it. Each narrative event is tucked into a precise time slot since Majora’s Mask revolves around a repeating three-day cycle. Players find an item or learn a tune, whip out their ocarina, play a few notes, and magically restart the count, before the plunging moon crash-lands at the end of the third day. Because of this conceit, the movements of all Clock Town denizens (and some outsiders) are meticulously scripted out. Noting down the intricacies of their daily schedules is one of the fundamental pleasures of Majora’s Mask. Alas, to savor it, players have to remain in Clock Town. Which is why crossing the city gates packs little emotional weight: Clock Town is never done with Link and Link is certainly never done with Clock Town. Kokiri Forest, by comparison, quickly subsides into a rose-tinted memory.

Ocarina of Time is about what’s out there, the exciting land of Hyrule; Majora’s Mask travels inwards, into Clock Town, into people. It’s no surprise that Link changes bodies and species. He puts himself in others’ shoes, literally and figuratively. He listens to their problems, helps them out, learns their backstories – or dons a mask and becomes another. His travels are circular: from Clock Town to the Great Bay or Woodfall or Ikana or Snowhead, and back to Clock Town. He’s always learning more about his point of departure, which is also his destination. In Ocarina of Time, he sets out to discover the world. Majora’s Mask is rather about self-discovery. Link regains and redefines his humanity and his skills by worrying about those he meets, which makes it self-discovery through others. 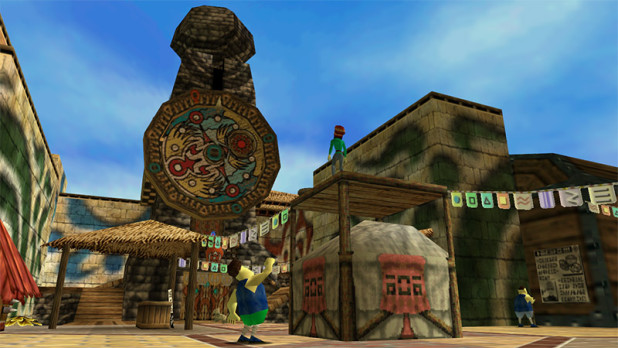 Among these troubled souls is his adversary. Both the Skull Kid and Link have suffered similar fates: the Skull Kid cannot accept that his old friends, the Four Giants, have left him behind; and Link -who, lest we forget, is an orphan- likewise despairs after Navi’s departure. If we were to condense Majora’s Mask into a single sentence, we might say “two lonely boys process loss in different ways. One tries to destroy a planet, the other to rescue it.” This happens on a physical as well as an emotional, psychological level. The endgame nominally takes place on the moon, except that where there should be a rocky surface there’s a grassy knoll ruled by trippy motion-blur effects and masked children. To quote Ben Kenobi, that’s no moon. It looks, rather, like something the Skull Kid might have conjured up; a manifestation of his imagination. In a sense, Majora’s Mask pointed the way towards another masterpiece about self-discovery and mindscapes, Psychonauts.

Termina, of course, is hardly less bizarre than its moon. If the latter could be the Skull Kid’s waking dream, then the former seems to be Link’s. Termina is a dream of Hyrule. For those who played Ocarina of Time – and this is why I wrote, before, that its sequel is so committed to its role – Majora’s Mask is filled with the distorted echoes of its predecessor. Malon in Lon Lon Ranch splits into Romani and Cremia in Romani Ranch. Guru-Guru, previously found brainstorming a magical tune inside a windmill, becomes, well, Guru-Guru, still cranking that infernal grinder organ in the Stock Pot Inn or by the laundry pool. His words in Ocarina of Time anticipate the clockwork universe of Majora’s Mask: “Go round! Go round and round and round! What fun!” The Twinrova Sisters, formerly terrifying bosses, become kindly old ladies offering potions and boat cruises at the Southern Swamps. Anju, a nameless lady who can’t keep her cuccos inside their pen, becomes, yes, Anju, looking for her missing fiancé in the most heartbreaking of all side-quests. The Skull Kid himself, a standoffish flute player in the Lost Woods who loathes adults, becomes a feared nemesis. 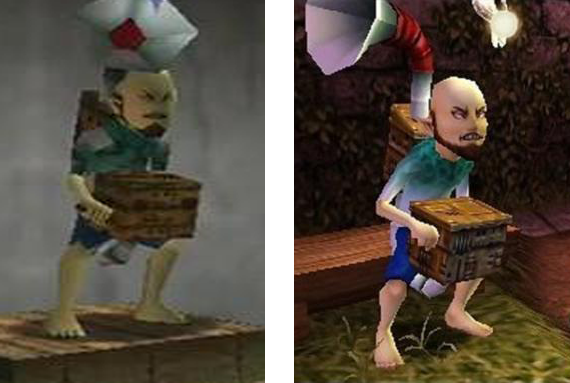 Most importantly, Link’s ocarina, his trusty portable DeLorean, warps time in both games, except in opposite directions. In the prequel, it allows him to skip forward seven years and transform his prepubescent self into a young adult. There, in a post-apocalyptic future riddled with zombies, he views the endless destruction wrought by Ganondorf. Link visits Hyrule before and after its fall. As for Termina, he can see only its fall, its cataclysm. Ocarina of Time, in Blakeian fashion, is about twin songs of innocence and experience. Majora’s Mask has just one tune- about coping with disaster. Some characters accept their circumstances and lie down to sleep. Others weep for their robbed tomorrows. Still, others embrace in the face of death, or drink their minds out, or keep delivering letters till kingdom come. In blogs and specialist sites, there’s a popular interpretation that suggests the boroughs of Termina represent the five stages of grief. But – to paraphrase Roger Ebert, who responded to a similar approach to Federico Fellini’s La Dolce Vita – that would reduce the game to a crossword puzzle.

If there’s one idea that both prequel and sequel share, it’s that Link’s deeds are inevitably forgotten because they – in a way – never come to pass. To beat Ocarina of Time is to reset the clock before the fall. No one (at least, no one mortal) will ever remember what Link has done. In Majora’s Mask, the same occurs when he restarts each cycle: whoever he helps cannot later remember his kindness. To save Termina, in the final round, he will have to ignore – because he can’t be everywhere at once – many of the little tragedies that will befall the citizens of Clock Town throughout the three days, and which Link knows must happen, when and where. To be a hero, he’ll have to pick his battles.