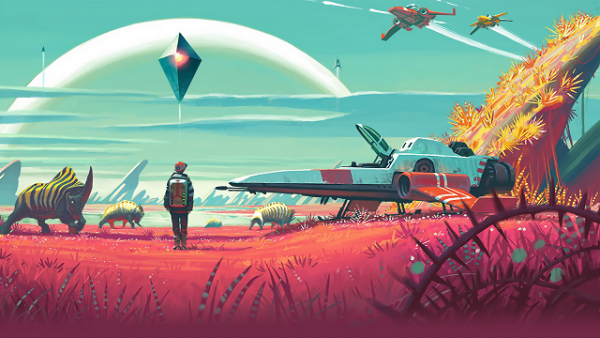 When the Tyrannosaurus Rex was marauding around a Cretaceous Earth, it had no idea its fate would be sealed by an angry mob of gamers, rummaging around Permian fossils for their lost sixty dollars. But that’s not what actually happened. Tyrannosaurus Rex has yet to be discovered, and probably never will. The angry gamers are currently lost on a disgusting, brown blob, surrounded by cyclopean fungus and capricious crabs. Harvesting plutonium to maintain life-support, to continue their sorry existence on the disgusting, brown blob.

This is by no means an insinuation that harvesting and crafting games are tedious. Terraria has two-dimensional graphics, and yet offers more to fundamental physics than No Man’s Sky does. Every new player to Terraria has been crushed by sand at least once, because contrary to the science behind No Man’s Sky, sand cannot levitate. To this day, shrapnel of thamium hover above the surface of the brown blob, awaiting another confused alien race to witness the miracle. There’s just something incredibly annoying about a space-faring game that employs no physics to its programming. It’s universally acknowledged that Sean Murray is not Stephen Hawking, but nor should he need to be to understand the basic principles of gravity. There are moons so close to their planets that they exist within the Roche limit, which means they should be tearing each other to pieces; or at least deforming one another. At such a close proximity, their gravitational effect on each other should be greater than that of the light box that was planted somewhere in the corner, masquerading as a star. Waves should be leaping over mountains, buildings torn from the ground they were found upon; destruction everywhere. But what we have is two planetary bodies existing without so much as a spin, and without so much as an orbit. Just stationary.

Then there’s the rest of the solar system that doesn’t exist. At some point before the timeline in which No Man’s Sky is taking place, Gas Giants went extinct. This might seem pedantic, but the presence of uninhabitable planets does bring realism to a game that requires a sense of reality. Unfortunately, inside the zero-gravity solar system, we’re left with what amounts to a game of three-dimensional Space Invaders. Shooting the meteors gives you bonus thamium. No Man’s Sky was designed to be an exploration game, with 18 quintillion randomly-generated planets to raise a flag upon. That is a tremendous accomplishment, and shouldn’t be deplored in its entirety, although it’s partly its weakness. It’s become No Man’s Sky’s gimmick, with more important aspects of the game becoming diminished. If there’s a choice between 18 quintillion brown blobs, or fifty beautifully designed planets, then the former was chosen. An exploration game requires wondrous aesthetics with history and mystery in abundance to keep the player immersed in the creator’s dream.

This is where the 18 quintillion becomes a sour number. The randomly-generated planets have less variation than an Age of Empires map. You might remember creating your own map in Age of Empires, and thoughtlessly throwing a few lions and trees around. That’s how the planets feel in No Man’s Sky. There are circumstances where a complicated life-form might occur, but this is rare, and the only noticeable behaviour will be passive or aggressive. So you have 18 quintillion planets, all with life-forms that lack behaviour and personality, rendered in a universe without fundamental physics.

With all that considered, No Man’s Sky isn’t a bad game. It’s exactly what you would expect from a team of fifteen people, inspired by a dream they probably didn’t have enough time to fulfill. It’s admirable that Hello Games, with such a small team, could make it this far, and that’s an accomplishment they should remain proud of. The problem has always been the faux-generated expectations and the price tag. With much of the anger hopefully settling, and Hello Games working on DLCs for No Man’s Sky, maybe some of the promises can still be granted. Currently though, they’re similar to the inflated heads of some of the patients in the 1997 classic Theme Hospital; and they’ve just had their head popped. The physics seem a long way from any kind of address, and that’s one of the most bothersome issues. It actually remains to be seen whether that can be addressed at this point as it would change the entirety of the game. There’s no interaction with the worlds you find yourself lost on. It’s almost like the set of The Truman Show, with every world a repeat of the last. Exploration is about the discovery and interaction with new and exciting things. It can be new creatures, new civilizations, or new unfortunate circumstances. No Man’s Sky just fails to deliver on the exploration ideal, and the survival aspect isn’t much better.

There are games already out there that promise the same spacefaring gameplay without the 18 quintillion gimmick. And without that silly gimmick, they’ve made decent games without the sixty dollar price tag. At this point, it might be best to wait and see what DLC content will be released for No Man’s Sky, then maybe the sixty dollars will be justifiable. However, the reality might be that the game is already six feet underground.