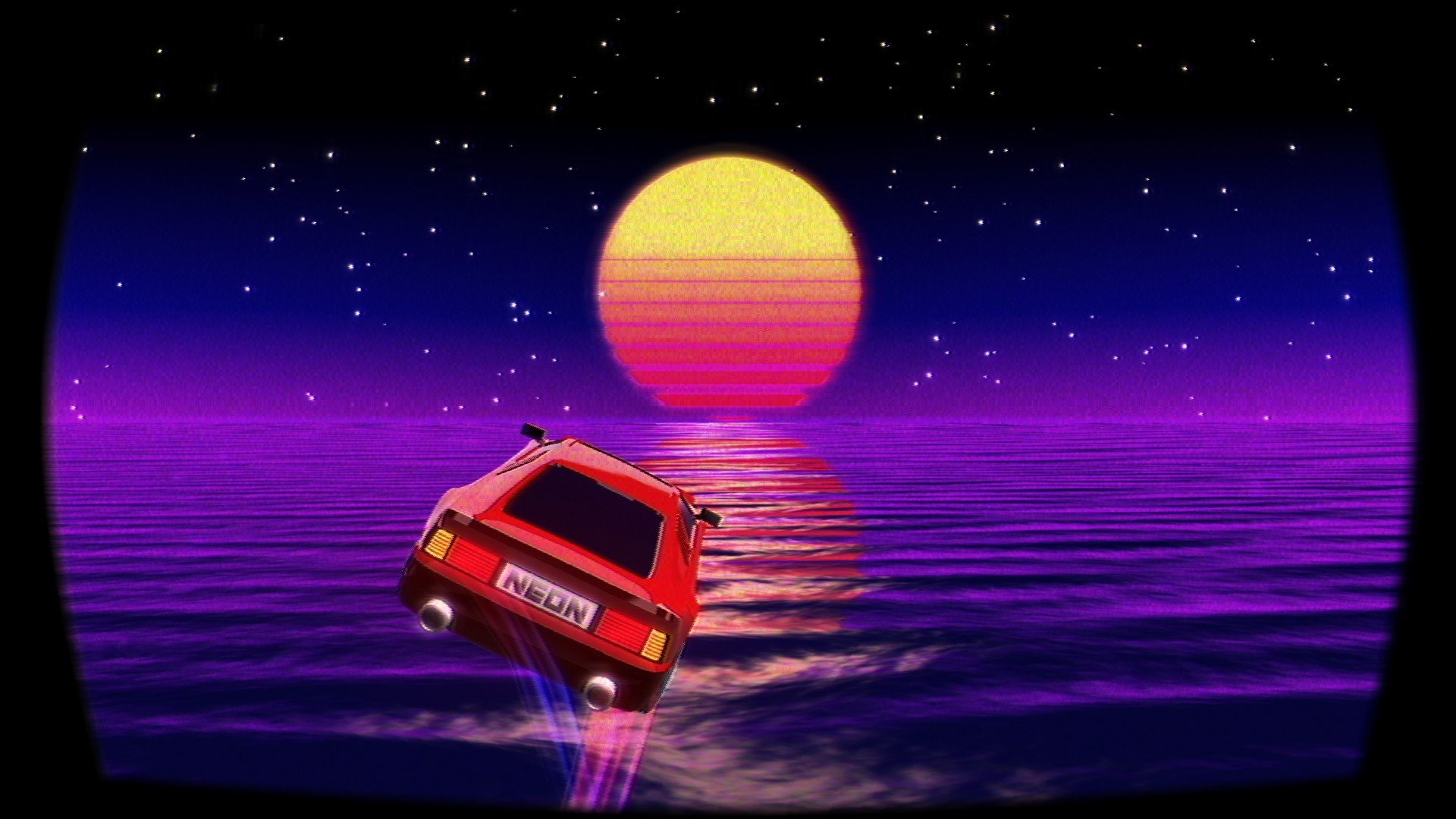 Neon Drive is probably one of the best games that you’ll ever hate. That statement takes some clarification of course, but know that while Neon Drive is an amazing journey through 80’s synth rock, it’s also a test of patience that will drive you to your absolute limits. If you think modern games are too easy, and even self-styled “hardcore” games aren’t challenging enough, then Neon Drive might just be the interactive soundtrack you’ve been looking for.

The setup is simple: there are seven arcade machine awaiting your attention in this futuristic world. Each machine is a portal to a musical track and you must guide your car past whatever obstacles are in your way. Most of the time this means just avoiding solid blocks, but every level tends to throw you a loop around the halfway mark just to shake things up and destroy your already frayed nerves. In one level it’s avoiding oncoming traffic as you cruise through an unnamed city, another sees you transforming into a jet and flying through rings, while another sees you running away from a psychedelic alien ship hell bent on synthing you out of existence. These aren’t just cosmetic changes to the levels either, usually the half point of a level marks a complete change in perspective, and it’s annoyingly effective at keeping the game fresh and exciting, even if you silently wish the whole game was just the easy parts. Levels are downright amazing to look at during slow periods

The challenge here is two-fold: first trying to nail down the split-second timing of avoiding obstacles, making near-miss after near-miss and often times cutting it so close you’re not even totally sure how you pulled it off. The second part is more abstract, since the best part of the game is the soundtrack and by making a mistake you ruin the song or end the level. More than just adding unnecessary noise to the fantastic music, you also run the risk of making future mistakes, since more often than not the level layout is intrinsically timed to the song. You’ll make your moves in time with the beat, moving with the electric drum kit and riding keytar scales up and down. Making a mistake can often ruin this concentration, although on the hardest difficulty this is moot anyway since the game only gives you one life.

Ok, let’s talk about the neon splashed elephant in the room here. The game is hard as all get out. Most of the time the challenge seems fair, and it’s a matter of getting your muscle memory tuned in through constant re-attempts. Beating a level in the single-digit of tries is a miracle. The biggest complaint is that this isn’t always the case, and some of the levels have sections that just seem downright mean, like dead-ends randomly thrown into a group of blocks. It occasionally veers from “oh, that’s my mistake” to “I’m going to set fire to this game,” and when it does, it brings the whole experience down. This will probably differ from person to person depending on their tolerance for a challenge, but it’s far less Dark Souls style pacing and more I Want to be the Guy style randomised insanity meant to make you angry.

Thankfully there’s still a lot of this game to love, namely the soundtrack. It’s amazing, especially if you love 80’s synth, and the songs run the complete gamut of styles. There are slower ballads that build into a crescendo, rocking beach tracks for flying down the digital highway, and ominous otherworldly alien tracks to avoid laser death beams to. If you survived the 80’s, or just know everything about the 80’s from TV and movies, then this game should speak to you, and that language is synthesized rock.

The graphics are appropriately neon inspired too, although it’s refreshing that the game isn’t pixelated since that seems a bit too on-the-nose. Rather it’s all lasers and bright lights, shapes coming to life around negative space and dark colours, a constant contrast that would look right at home in 1986. The only real object is your car, which you can customise the colour and license plate of as you drive down the darkened highway of digital rock. Then there are the obstacles like blocks, other cars, alien ships, and mechanical menaces, which look great even if you’re running past them at the speed of sound. The change in perspective can also be a change in gameplay style.

The real star in the visuals are the levels themselves, and it makes one wish for a casual mode to just let you enjoy them. Beating a level unlocks the practise mode for the next level, and that’s something that deserves to be played, since it adds an appropriate CRT filter over the game. The levels are wonderful, full of life and action in the background that fits with whatever’s going on with your car, changing with the music for a dual-sense experience. It’s well worth replaying levels over and over just to see what’s going on, and every time picking out something you missed the last go.

A recommendation of Neon Drive comes with a hefty caveat. For everything great about the game -simple controls, amazing soundtrack, and awesome vintage graphics- there’s that looming darkness of just how difficult the game is. If you’re not one that can stomach a challenge it’s hard to tell you to play this game, and while the reward for a job well done is it’s own satisfaction, there are few people masochistic enough for this game to really reach. Still, if you value a challenge and love a good original soundtrack, then Neon Drive should be next on your list.