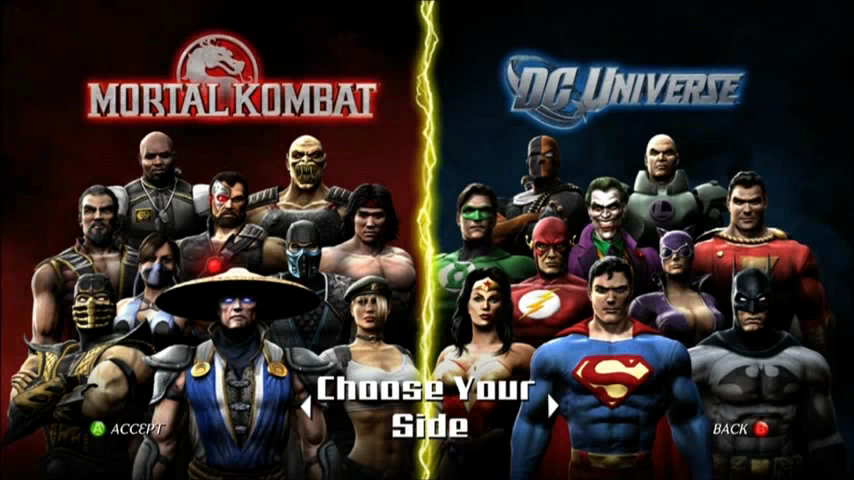 With the closure of Midway Games well into the past at this point, NetherRealm Studios has taken the reins of the Mortal Kombat franchise, and their renewed efforts with the series have ushered in a new wave of immense success. Mortal Kombat (2011) delivered a reboot that rejuvenated the franchise back into relevance, and Mortal Kombat X expanded on its predecessor and expanded the fanbase of the series. A subsidiary of Warner Bros. Interactive Entertainment, NetherRealm also gifted the world with Injustice, another fighting game series that centers around characters from the DC Universe. Tremendously successful as well, the series recently received the green light for a sequel, and NetherRealm shows no signs of slowing down. Having said all this, the ascendancy of the Mortal Kombat and Injustice IPs generates a new question entirely: will NetherRealm make another attempt at a crossover series? Many factors exist in determining the forecast for such a reboot, including the shoddy performance of the first crossover attempt, the overall progress since then, and measuring the popularity of the franchises against their compatibility.

In order to fully determine the likelihood of a sequel, the first title, Mortal Kombat vs. DC Universe, must be analyzed. The good news is that the game sold rather well, shipping out over 1.9 million copies in its first few months and being regarded by Midway as one of their most successful titles. The initial financial success of MK vs. DCU alone provides a decent argument for a sequel, as sales represent the main driver for continued development. Despite the sales figured, however, the overall performance of the game also bears observation. Issued with roster-balancing, questionable game modes, and a lack of Mortal Kombat’s trademark gore left many players yearning for more. Furthermore, going back from MK9/10 or Injustice, the gameplay in MK vs. DCU  feels a step behind, and an overhaul clearly needs to be performed in order to provide the same level of quality that is expected from NetherRealm. In short, MK vs. DC represented a decent attempt at a blockbuster crossover, but the bar has been set much higher, and work needs to be done in order to make the leap. The Case For a Mortal Kombat vs DC. Universe Sequel:

In terms of gameplay, NetherRealm now represents a well-oiled machine. While the first MK vs. DCU suffered from a lack of key gameplay elements, Injustice and the recent Mortal Kombat titles lifted the bar to a far higher standard. If MK vs. DCU 2 receives the green light, gameplay will almost certainly flourish, and issues with balance, game modes, and fluidity will become a thing of the past. The sheer image of Batman delivering an artfully strategic combo on Sub-Zero in the style of NetherRealm’s recent titles is enough to offer a powerful case for reviving the series, and a pristine fighting game formula sets the stage for dozens of hours of brutal fun.

From the standpoint of financial justification, NetherRealm only needs to reflect on the success of their recent Mortal Kombat titles as well as the boom of superhero movies to conclude that a MK vs. DCU sequel stands a strong chance of doing well. Sure, perhaps superhero movies originating from the DC Universe have not been reviewing very well, but the box office success of the films negates that concern. At the end of the day, superhero films and merchandise bring in the big money, and MK vs. DCU 2 represents a near-guarantee to acquire a profit. A tremendous chance exists for NetherRealm to capitalize on the popularity of fighting games and superheroes and create a crossover that would reach millions of gaming households.

Ultimately, NetherRealm has an incredible opportunity to make wondrous improvements over MK vs. DCU and deliver a blockbuster sequel that the world may not necessarily need but absolutely deserves. Success would result in a lasting crossover series, and NetherRealm would inch themselves closer to becoming the premier fighting game developer. The Case Against a Mortal Kombat vs DC Universe Sequel:

Sure, the gravy train is currently rolling at full force for NetherRealm, but this does not imply a lack of risks associated with a MK vs. DCU sequel. Perhaps the most glaring issue is the lack of outright compatibility between the two franchises. Essentially, the compatibility concern boils down to this: while Mortal Kombat thrives on an excess of blood and gore, most media associated with DC Comics tends to champion a milder level of violence in order to appeal to a wider age spectrum. This was most certainly the case in MK vs. DCU, where the overall violence factor in the game was approved for a T-rating from the ESRB, which is below the M-rated standard of a Mortal Kombat title. Fatalities in the game were adjusted considerably; the Joker’s fatality, for instance, initially involved the character delivering a majestically graphic headshot to his opponent, but the final version of the game adjusted the headshot to occur off screen. This left loyal fans miffed, and should a sequel emerge from the woodwork, a similar dialing back of the gorefest would be likely.

While MK vs. DCU ushered in a decent degree of success, the buzz regarding a sequel is remarkably low. As a benchmark, I compared Google search results of “Mortal Kombat DC 2” with  “Red Dead Redemption 2” (another potential sequel), and the possible Red Dead successor won comfortably in results, 2,420,000 to 668,000. Furthermore, upon inspecting the search results of “Mortal Kombat DC 2,” message board discussions regarding a sequel appear to be sparse. Fan and public interest certainly accounts as a factor in determining if a sequel is viable, and if nobody is buzzing about a new MK vs. DCU, we may not bear witness to one anytime soon.

In terms of image, Mortal Kombat may be doing a tremendous job, but DC continues to receive a plethora of criticism at nearly every box office release. Further damage in the form of a lackluster title with a lukewarm hype level at best could not only cause further damage to DC, but also drag the Mortal Kombat franchise down as well. Based on all the facts available, a sequel seems likely, but the timing of one remains unclear. NetherRealm may pull the trigger right after Injustice 2 weathers the storm, or perhaps the green light may occur further down the line. Either way, NetherRealm enjoys working with both of these franchises, and a reboot appears to be an inevitability.