It’s important to remember your roots, without them you lose sight of what made you, you. This seems to sometimes be an issue with the games industry, as we try more and more to innovate we sometimes forget sight of what it was that brought people into games in the first place. Yes, crafting base-building online co-op experiences can be great fun, but sometimes you just want to grab a shotgun, never worry about re-loading, and blast the ungodly hell out of some demons.  DUSK is one of those games.

Like the games that wear their influence on their sleeve, there’s not much of a story to DUSK. You are a nameless adventurer that’s found himself in the titular town of Dusk while searching for treasure. You’ve run afoul of the local religious leaders and they’ve decided you’re a threat to their mission. After being strung up with meat hooks in your back, you free yourself, kill your guards, and decide to get revenge on anyone in your way.

There really isn’t much more of a plot to DUSK, and for a game like this, there really doesn’t need to be. There is a logical flow to the levels, as you move from the farms and outskirts of Dusk, to the town proper, into the industrial areas and through labs into a world not meant for man. There are small bits of storytelling in the environment developed through the intro and outro scenes from each of the three chapters, but that’s it. DUSK isn’t really a game with anything important to say; there’s no questioning the impact of player agency; no commentary on modern politics or the role of a guardian; just a horde of evil enemies to kill and just enough ammo to kill them with. 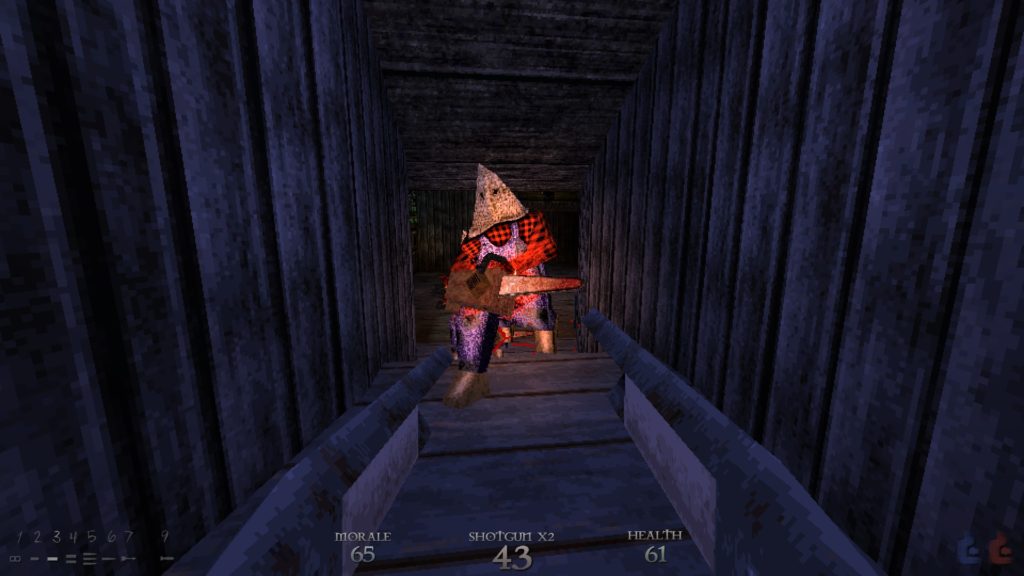 Chainsaw-wielding psychos become the least of your issue, but certainly, pose a threat in the first few levels.

To that end, DUSK is absolutely amazing. The shooting, which is the most important thing in a shooter, is nearly perfect, with smooth and responsive controls that make running around like a heavily armed Sonic the Hedgehog feel fun and easy. Circle-strafing is the name of the game in most scenarios and the mixture of your incredible speed and the just right speed of enemy projectiles means that with a little practice you can start clearing levels without even being hit.

There’s only 10 guns, and a handful of enemies, but they all serve specific purposes and are memorable at a glance. In terms of weapons, there are the melee options such as the meat hook, quick firing dual-wielded pistols, some lever action shotguns to serve as a work-horse, and a double-barreled shotgun for incredible close quarters damage. In addition, there is a machine gun to act as a bullet hose and a sniper rifle and crossbow to deal damage at long range and pierce enemies, and finally, the mortar and explosive rivet launcher to deal with heavier threats. All of these are used against a variety of enemy cultists, lunatics, the military, and other-worldly demons that stand in your way, with a great mixture of ranged and melee enemies that challenge you with focusing your fire on the most immediate threats.

All of this is crammed into some of the finest FPS levels in recent memory, and the scenarios you go through are amazing. Many levels are a mixture of arena shoot-outs and light puzzle solving, but their actual layouts are a great mixture of old ideas and modern understanding. While the first few levels may seem simple and straight-forward, by the end of the third chapter, you’ll be running through alternate dimensions, using launch pads and teleporters, and battling your way through things man was never meant to see, all while enjoying every second of it. 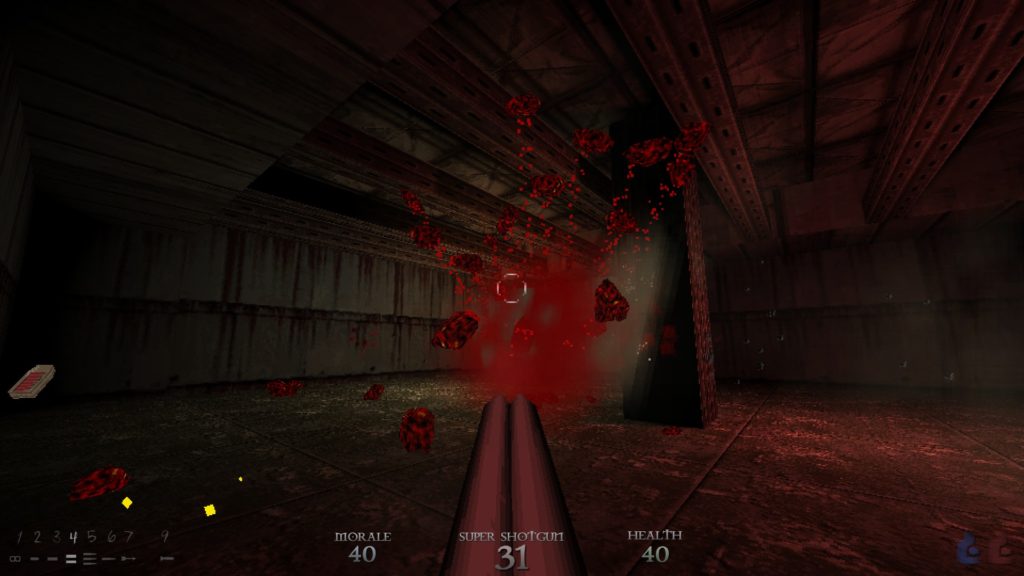 Ludicrous gibs are everywhere, especially after defeating a boss

If that’s not enough, Dusk also has a fantastic multiplayer mode with dedicated servers, including servers running modded games. It’s an explosive, bunny-hopping madhouse and with bottomless weapon magazines, expect the bullets and bombs to be flying. While it’ll likely never become the next big multiplayer hit, this could be the perfect new addition to your next LAN party roster.

Visually DUSK is rather interesting. Imagine what would’ve happened if gaming’s graphics capabilities peaked with Quake. There’s an obvious look to the game, which can be described as “1998-chic”, and if you showed someone a screenshot and told them it’s an unreleased map pack for Unreal they might just believe you. That doesn’t mean the game is antiquated, and it does a lot with its specific style, largely with the lighting, which is often used to great effect to create a horror atmosphere. The overall use of shadows and light make the game look far better then what you’d expect for the long lost cousin of Doom 64. Finally, weapons and enemies are all greatly detailed, which especially helps them stand apart from the environment in what could’ve been a visual mess. 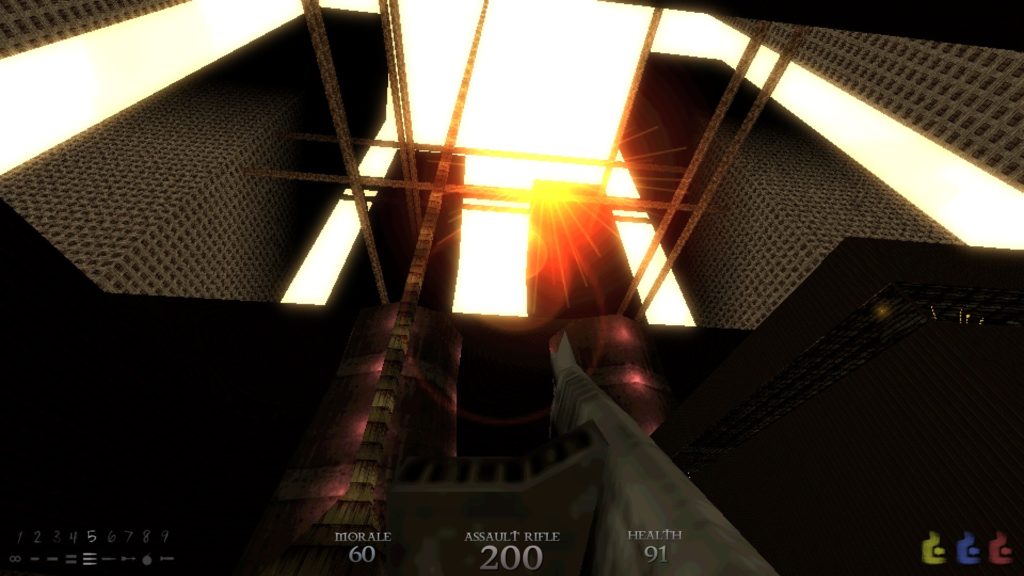 As for the audio, it’s nothing short of brilliant. Everything here sounds great, even if the few bits of voice work are incredibly amateurish. Weapons have massive weight to them, and even the pistols sound thunderous when fired, especially when you equip the speed-firing powerup. Enemy audio clips are terrifying, especially some of the demonic enemies like the dark knights in the third chapter who have voice clips appear to be remixes of metal scratching metal and the horrifying Wendigos remain invisible until damaged and let out a wailing cry when discovered. Most importantly, fans of metal will love the soundtrack! It’s so good, it honestly gives Mick Gordon’s DOOM soundtrack a massive run for its money.

DUSK is the bastard game of a thousand fathers, and it wears this mantel with adamant pride, openly referencing the games that inspired it like Doom, Blood, and Quake. If you’re sick of modern shooters or wary of games that attempt to ape the classics, then this might just be the game to finally win you back.