One thing is for sure, today’s Nintendo Direct won’t be criticized for being underwhelming or worse, disappointing. After a very successful Super Smash Bros. Ultimate Direct, Nintendo came prepared to knock everyone’s socks off once again. The presentation was bookmarked by two epic moments – the first introducing the long-awaited and highly demanded Luigi’s Mansion 3 and the second placing a spotlight on the upcoming (and not yet titled) Animal Crossing game for the Switch. And if that’s not enough, Nintendo also announced details on the Nintendo Online service, Nintendo Entertainment System Controllers, and a stunning Nintendo Switch Super Smash Bros. Ultimate set that is sure to put a dent in the pockets of many fans. Not to mention, high-definition versions of some of the most beloved Final Fantasy games of all time, a special edition of the groundbreaking Katamari Damacy, and a swarm of some of the most popular tabletop games heading to Switch. It’s madness, I tell you! When fans asked for everything to put on the Switch, we never thought Nintendo would actually take us seriously, but they did. Below is a list of everything announced today. Let us know what you are most excited for in the comments below.

Isabelle from the Animal Crossing Series will Also be a Playable Fighter in Super Smash Bros. Ultimate

Isabelle Joins the Fight!: Taking a break from assisting mayors and just being an all-around lovely pup, Isabelle from the Animal Crossing series is joining the roster as a playable fighter in Super Smash Bros. Ultimate.

Luigi’s Mansion 3 (working title): The next installment in the spooky series is currently in production and launching exclusively for Nintendo Switch in 2019.

Nintendo Switch Online: With Nintendo Switch Online, members gain access to online play and Save Data Cloud backup in compatible games, the NES – Nintendo Switch Online collection of classic games with added online play, special offers and a smartphone app with features to make online gaming sessions more fun and engaging for supported games. In addition to Splatoon 2, more online games will support voice chat through the app, including Mario Kart 8 Deluxe, ARMS and Mario Tennis Aces. Nintendo Switch owners won’t automatically become members when the service launches on Sept. 18, so they will need to purchase an individual or family membership in order to continue enjoying their online play in compatible games. For pricing information, and to pre-order a 3- or 12-month individual membership from select retailers so you can be ready to go once the service launches, visit https://www.nintendo.com/switch/online-service/pricing. A free seven-day trial will also be available. At launch, 20 NES games, including Super Mario Bros. 3, The Legend of Zelda, and the newly announced Ice Hockey and Pro Wrestling (available for the first time since its 1987 release) will be available to play, with more games added regularly.

Nintendo Entertainment System Controllers: Playing NES – Nintendo Switch Online will feel even more authentic by using the new wireless Nintendo Entertainment System Controller, available for purchase exclusively for Nintendo Switch owners with a paid Nintendo Switch Online membership in the U.S. and Canada. This re-creation of the original, iconic NES controller comes in a pack of two for $59.99 and can be charged by attaching to a docked Nintendo Switch system. NES controllers will be available for pre-order on Sept. 18. For more details, visit https://www.nintendo.com/switch/online-service/special-offers.New Super Mario Bros. U Deluxe: Up to four players can enjoy this revamped version of the classic Wii U launch game when it comes to Nintendo Switch on Jan. 11. Mario, Luigi and Toad return as playable characters, and are joined by Nabbit and Toadette, who can also turn into Peachette by getting a Super Crown, offering new ways for beginners to play together with friends and family. New Super Luigi U, the first platformer with Luigi in a starring role, will also be included in New Super Mario Bros. U Deluxe at no extra charge. Between both games, there are a whopping 164 courses to play. Mamma mia!

Yoshi’s Crafted World: Play as an adorable Yoshi traveling through a world crafted from household items like boxes and paper cups in this new Nintendo Switch platforming adventure. After traveling through a perfectly constructed stage, players can start at the goal and journey back to the start on the “flip side,” the backside of the course, to discover secrets. Yoshi’s Crafted World launches on Nintendo Switch in spring 2019.

TOWN (working title): GAME FREAK, the developer of the Pokémon series, has created a new RPG for Nintendo Switch. In TOWN, players must take up arms against invading monsters, all within the walls of a single village. TOWNlaunches for Nintendo Switch in 2019.

Super Mario Party: In the newly revealed Sound Stage mode, up to four players can each shake a Joy-Con in rhythm-based gameplay, while the River Survival mode offers the series’ first four-player co-op. Plus, there’s 80 new mini-games, a single-player Challenge Road, the mini-game gauntlet Online Mariothon and much more. Super Mario Party launches for Nintendo Switch on Oct. 5 and is available for pre-purchase on Nintendo eShop and the game’s website beginning today.

Pokémon: Let’s Go, Pikachu! and Pokémon: Let’s Go, Eevee!: During the adventure, players will be able to overcome obstacles with their partner Pokémon (either Pikachu or Eevee) using Secret Techniques. These are skills that only partner Pokémon can use, like chopping down trees, traveling across water or soaring in the sky. Both games launch exclusively for Nintendo Switch on Nov. 16. A bundle that includes a Pikachu and Eevee themed Nintendo Switch system and Joy-Con, a Pokémon: Let’s Go! game and the Poké Ball Plus controller will also be available on the same day.

Asmodee Digital: With a literal Tabletop mode, tabletop gaming is a perfect fit for Nintendo Switch. To prove it, Asmodee Digital is bringing full adaptations of best-selling card and board games like Carcassonne, The Lord the Rings: Living Card Game, Pandemic, Munchkin and Catan to Nintendo Switch, starting this December.

DAEMON X MACHINA: In this stylish action game first revealed at E3, the world and its inhabitants are on the brink of extinction. As a mercenary, players will pilot a powered suit called an Arsenal and face runaway AI. Defeat enemies and acquire parts that can be equipped on the fly or brought back to base to craft new armaments. Use additional tactics by changing between projectile and melee attacks or take the fight on foot to gain an advantage in battle.DAEMON X MACHINA launches for Nintendo Switch in 2019.

Capcom Beat ’Em Up Bundle: Some of Capcom’s most classic arcade games like Final Fight, Captain Commando and Knights of the Round are coming to Nintendo Switch with up to four-player local or online play. This also includes games that have never launched on home consoles before like Armored Warriors and Battle Circuit. The digital version of this bundle launches in Nintendo eShop on Nintendo Switch this winter.

Sid Meier’s Civilization VI: When the acclaimed strategy game comes to Nintendo Switch on Nov. 16, it will do so with an exclusive four-player wireless LAN multiplayer mode.

Splatoon 2 Version 4 Update: Starting tonight, the first set of weapons in the Kensa Collection is coming to Splatoon 2 as part of the new Version 4.0 update. These familiar weapons are painted with stylish monotone designs. In addition, significant new Splatfest changes are coming as part of this update. In early October, Version 4.1 will bring a new stage, new songs and more Kensa Collection weapon sets complete with new sub and special weapons. Check out the Squid Research Lab Tumblr for more details.

Mario Tennis Aces Version 2.0 Update: After downloading a free update to the action-packed sports game on Sept. 19, players will have access to a new online co-op mode that lets players participate in time-limited missions with other players. Players who complete objectives while these missions are active will receive special outfits, characters with alternate color schemes and more. Also, be on the lookout for new upcoming playable characters like Birdo, Shy Guy, Koopa Paratroopa and Petey Piranha.

Diablo III: Eternal Collection: The Nintendo Switch version of this classic action-RPG will send players on a journey through Sanctuary, where they’ll vanquish the armies of Hell and plunder powerful loot as one of the seven playable classes. Up to four players can adventure together via local or online multiplayer. The Nintendo Switch version of the game features the exclusive Legend of Ganondorf cosmetic armor set, compatibility with all amiibo figures and more. Diablo III: Eternal Collection launches Nov. 2.

Two RPGs on the Way!: Fans who love playing role-playing games anytime and anywhere are in luck! The World Ends with You: Final Remix from SQUARE ENIX launches Oct. 12 and Xenoblade Chronicles 2: Torna ~ The Golden Country– which is available for pre-purchase on Nintendo eShop starting today – comes to Nintendo Switch on Sept. 21 in stores and Nintendo eShop, or on Sept. 14 for owners of the Xenoblade Chronicles 2 Expansion Pass.

NBA 2K Playgrounds 2: Get ready to jam in the sequel to the smash-hit NBA arcade game, coming to Nintendo Switch this fall.

Just Dance 2019: With Just Dance 2019 on Nintendo Switch, there’s no excuse for players to not get down to Camila Cabello, Bruno Mars and Cardi B. at home, in the middle of the park or even at the dentist’s office! Just Dance 2019 launches on Oct. 23.

Mario and Luigi: Bowser’s Inside Story + Bowser Jr.’s Journey: One of the most acclaimed games in the Mario & Luigi RPG series is getting a remake on Nintendo 3DS. In addition to the game’s revamped graphics and refined gameplay, a new side story follows Bowser Jr. as he gathers an army, creates formations, supports his allies with an arsenal of moves and generally causes chaos (in the best way possible). Mario & Luigi: Bowser’s Inside Story + Bowser Jr.’s Journey will prove two adventures are better than one on Jan. 11.

Luigi’s Mansion: Two players who each own the game can team up to explore and capture ghosts in Luigi’s Mansion, a Nintendo 3DS remake of the classic Nintendo GameCube launch game. This new version of the game also features amiibo support. Tapping one of the four compatible amiibo will reveal where Boos are hiding and heal Luigi when he talks to Toad, among other bonuses. Luigi’s Mansion will haunt the Nintendo 3DS family of systems on Oct. 12.

From Mario and the gang's second blowout bash to a slew of The Legend of Zelda announcements in celebration of its upcoming milestone, these... 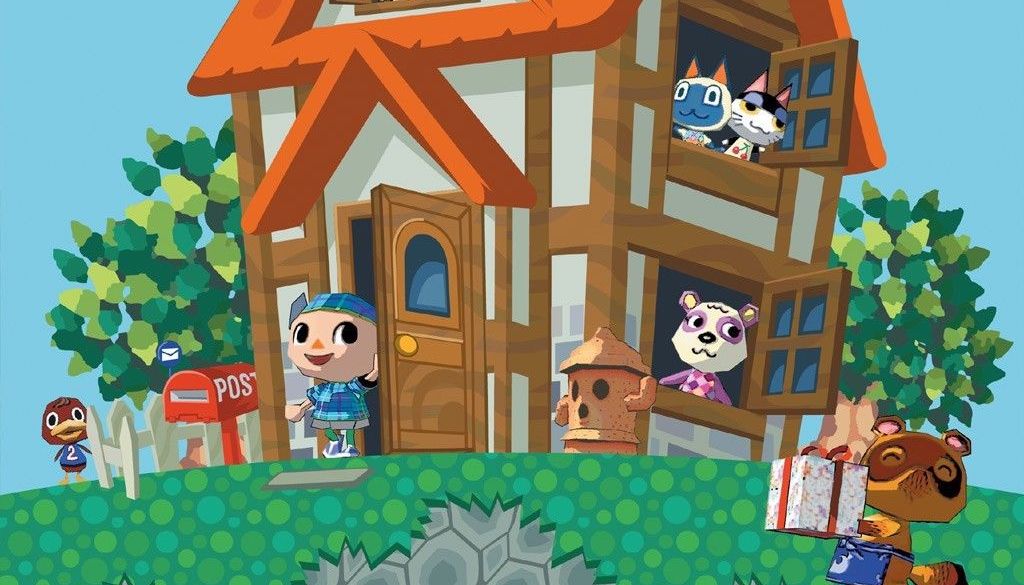 12 Animal Crossing GameCube Features That Never Returned to The Series

Three-level towns and catching Wisp spirits may have finally returned to the franchise with New Horizons after being absent for almost two decades, but...