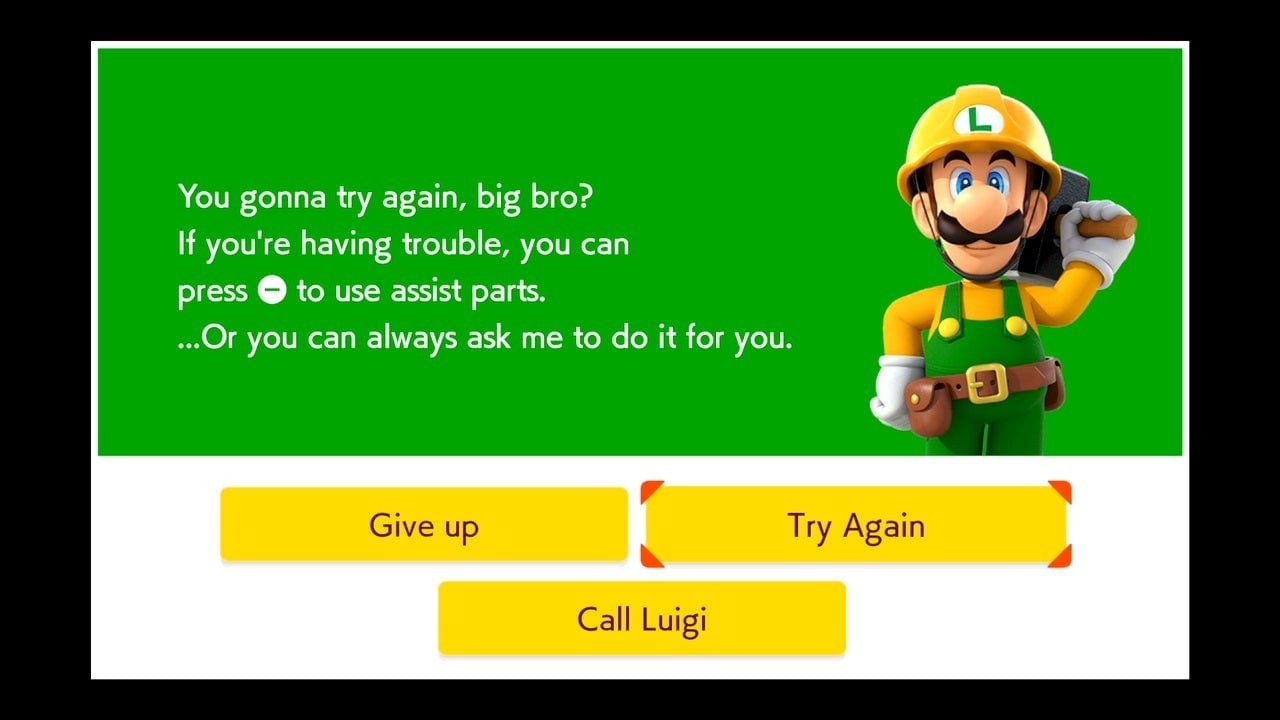 Ever since the Wii era, Nintendo has sought to incorporate extra, beginner-friendly features into its first-party lineup. These “assist features” aim both to help players who struggle to play through certain titles and cater to players who want a more laid-back experience. Naturally, these assist features have carried over into the Nintendo Switch’s lineup as well, but the way these features have taken form varies significantly between titles. Most of the system’s first-party releases go out of their way to make themselves more accessible than ever before, but others remove or pare back assist features seen in the past. It’s clear that, even after all these years, Nintendo is still experimenting with accessibility options and determining which ones are best for each game, and the Switch library offers a fascinating glimpse into the developers’ thought processes.

If there is one subset of titles that applies its assist features more consistently, it would be the Wii U ports. Nearly every first-party Wii U port has included accessibility options that were absent in their original versions. Pikmin 3 Deluxe and Donkey Kong Country: Tropical Freeze, for instance, both include easier difficulty modes that increase the player character’s health and tweak several other elements. Captain Toad: Treasure Tracker’s port adds a cooperative mode that allows a second player to throw turnips at enemies, and it along with Super Mario 3D World + Bowser’s Fury let players automatically spawn helpful items and other perks using amiibo, a feature seen in many other modern Nintendo titles.

Mario Kart 8 Deluxe’s accessibility features are particularly notable in that they let players automatically accelerate and steer along the track, and the auto-steering option specifically prevents players from falling off the track. Many players who otherwise may not have been able to comfortably play Mario Kart 8 Deluxe have gotten great mileage out of these features, and the auto-steering is smartly balanced in that it makes using certain shortcuts much harder if not impossible. One questionable aspect of these features is that they can be toggled mid-race, allowing savvy players to abuse auto-steering to avoid falling into pits while turning it off if they need to use a shortcut. It’s debatable how much this exploit actually affects the balance of the game, however, so these features end up being a net positive in the end.

Some of the most interesting assist features in these Wii U ports come in the form of extra playable characters. Both Tropical Freeze and New Super Mario Bros. U Deluxe add a selectable character with significant advantages compared to the default cast, and players can use them to make the platforming more forgiving. The availability of these characters differs between games; in Tropical Freeze, Funky Kong can only be used in the Switch-exclusive Funky Mode, while New Super Mario Bros. U Deluxe lets players use Toadette in any game mode other than Challenge Mode. Regardless of their specific implementation, both characters represent a fascinating way to address accessibility concerns that actually appeals to both experienced and inexperienced players. Casual players can use these characters to give themselves a helping hand in each game’s respective campaign, while hardcore players can experiment with their expanded move-sets and discover useful advanced techniques.

The first-party Switch exclusives vary more in how they incorporate assist features. Much like the Wii U ports, many of these titles expand on the accessibility features of their predecessors. Luigi’s Mansion 3, for instance, gives players the option to automatically receive hints when they are stuck on a puzzle, and Yoshi’s Crafted World builds upon Yoshi’s Wooly World’s Mellow Mode by allowing players to locate secrets more easily. Super Mario Odyssey includes an Assist Mode that points players toward the next story objective and prevents them from dying when they fall into a pit.

At least one of these titles, however, replaces its predecessors’ assist features with a less forgiving alternative. Starting with New Super Mario Bros. Wii, certain Mario titles included a feature dubbed the Super Guide, which allowed players to skip past sections or entire levels if they died a certain amount of times. Super Mario Odyssey and Super Mario Maker 2 feature similar mechanics, but the perks that players receive in the former are much less potent. In Odyssey, if players die to a major boss three times, they are given the option to purchase a health-extension item from a nearby vendor. Players are still expected to beat the boss themselves, and since the feature requires coins to use, players will have to go back and find more coins if they die too many times. It’s a noticeably less forgiving system than even the alternative found in Super Mario 3D World and Captain Toad: Treasure Tracker, which hand players a free invincibility power-up after repeated deaths. This kind of assist feature lends struggling players a helping hand without eliminating the need to play the game outright. By contrast, Super Mario Maker 2’s Story Mode brings back the traditional Super Guide system for when players run out of lives, along with the extra option to place course parts in a given stage after dying in it more than once. This demonstrates a willingness by Nintendo to avoid sticking to a single design blueprint for its games, and it makes the case that certain assist features may work better for some games than they do for others.

One first-party Switch game demonstrates this willingness to experiment with assist features more than any other, and that game is The Legend of Zelda: Breath of the Wild. Similar to other titles, players can use amiibo to spawn an assortment of items and even special characters like Wolf Link to make certain sections easier or just to mess around. Interestingly, however, Breath of the Wild forgoes many of the assist features that have become commonplace in modern Nintendo titles. There are no mechanics that aid players after repeated deaths, and there are no optional modes that make the experience easier. Prior Zelda titles like Ocarina of Time 3D and Skyward Sword included optional Sheikah Stones that revealed solutions to specific puzzles, but even this feature has been dropped in Breath of the Wild. Compared to other first-party Switch titles, Breath of the Wild is a noticeable outlier in terms of assist features, and this ends up making perfect sense when looking at the game’s overall design approach.

Given the title’s emphasis on freedom, players have complete control over which challenges they wish to tackle and which ones they wish to skip. Players can finish all of the main story quests to gain as much of an edge over Ganon as possible, or they can head straight for him right out of the tutorial for the ultimate challenge. In a way, Breath of the Wild’s open design essentially serves as one big assist feature, as whenever players come across a difficult quest, shrine, or combat encounter, they can simply leave it for later and try something else. It’s a very natural, unobtrusive way to give players control over the level of difficulty, and it ends up working perfectly given the game’s premise.

In the end, these Switch titles demonstrate how valuable it is to consider every approach possible for helping struggling players. It would have been easy for Nintendo to simply reuse the Super Guide for every first-party title after its debut game, but it instead considered the overall design of each title and built different assist features to match them. A Super Guide in Breath of the Wild, for instance, wouldn’t make much sense since players can just ignore difficult sections. The Tropical Freeze port added the Super Guide to Funky Mode, but rightly kept it out of the Original Mode to preserve the challenge of the Wii U version for those who want it. Avoiding a one-size-fits-all approach when designing these assist features ended up benefitting each title in different ways, and it also led to a whole host of valid approaches for future developers to consider when thinking about accessibility features. That’s not to say that every one of these assist features is perfect, but they ultimately succeed in advancing the conversation over accessibility in games.

Sony’s Sidelining of Japan Studio Will Damage Its Brand

The Short Length of Bowser’s Fury Is To Its Benefit