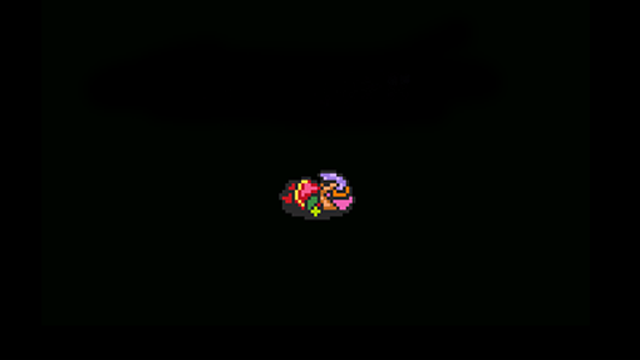 Ask me which Zelda game is my personal favorite and I’m likely to launch into a lengthy explanation on why it’s impossible to choose, listing off the many merits of all those in contention for the top spot (which include at least four on any given day), the rankings constantly rotating in my mind like they’re stuck in a revolving door of excellence. My least favorites, on the other hand, I’ll rifle off without any hesitation. True, it’s a short list that includes some games I wouldn’t even consider myself to actually hate (and two that I do), but if a Zelda game doesn’t measure up, it sticks out. That’s the price of consistently amazing quality! But unfortunately nobody’s perfect, so here are my least favorite Zelda games:

The Capcom 3 (Oracle of Ages, Oracle of Seasons, Minish Cap)

Okay, I’m not like those snobs who believe that true champagne can only come from the eponymous French region, or that James Bond must be played by a Brit, otherwise there’s been some sort of sacrilege committed, and I don’t believe that Nintendo is the only company that can make a great Zelda game. I do, however, believe that as of yet, they’re the only ones that have made a great Zelda game. While many may sing the various praises of Capcom’s efforts in the franchise, to me they were merely serviceable at best, bland imitations of a formula that seem to missing a key ingredient that keeps them from being memorable.

While Oracle of Ages and Oracle of Seasons certainly look and play like Link’s Awakening, what makes the latter far superior, and indeed what Nintendo has found a way to inject into nearly every one of their entries, is personality. It would be hard to top the surreal weirdness and meta aspects of Koholint Island, but the boring worlds of OoA and OoS don’t even try. Instead, they go through the standard story motions, figuring that any old tired trope should work for a Zelda game, after all. What Capcom didn’t seem to get with these two titles was that though story isn’t important, character is, and the Oracles games have none. None of the offbeat humor the series is known for, nothing new visually, something Nintendo has tended to tinker with over the years. Add to that some annoying mechanics that required changing time or seasons over and back again to tediously progress through certain areas, and the slog becomes a bit more mechanical, less wondrous. 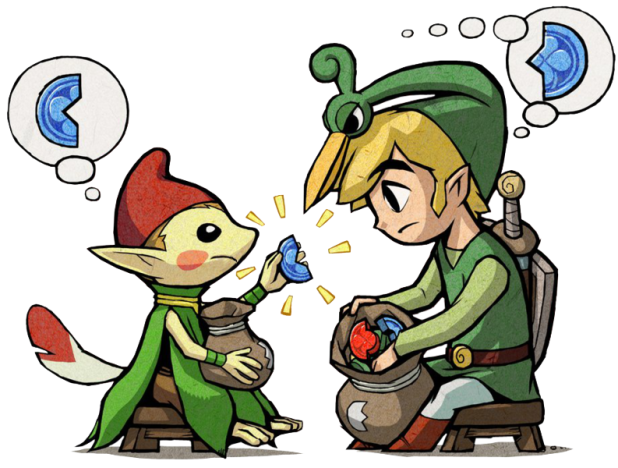 Trading kinstones is as much fun as it looks.

The Minish Cap fared slightly better, but still suffered from some of the same faults. While the story setup was actually imaginative, their use of the tiny, secret world was disappointing, void of any spirit. The Minish seemed like everyone else, just living in leaf piles or grass clumps, and while Ezlo had potential to be one of the great all-time sidekicks, instead he just comes of as an exposition dump with some amusing animations. The dungeons are decent, but only just, and the constant shrinking and growing during certain sections can get on the nerves, busywork meant to pad the time in a game more concerned with fusing kinstones than creating an adventure.

Still, the Capcom 3 aren’t horrible games; just not very good in the Zelda spectrum, where they lack that Nintendo touch, and average just isn’t acceptable.

Unfortunately a gradual disintegration of appreciation for something I at one point loved sometimes occurs. Whether it’s Return of the Jedi now being seen as only just above the Prequels, or Indiana Jones and the Last Crusade as a mediocre paint-by-numbers shell of Raiders, time and perspective can be cruel. There’s a part of me that wishes I never ruined that initial positive experience, that wants to go back to that mindset that allowed for me to enjoy these things in the first place, that would keep my memory of them untainted. But it’s too late. I can’t un-see what I have reseen, un-read what I have reread, or un-play what I have replayed.

I tend to replay every Zelda game, often multiple times, and I had liked Skyward Sword quite a bit back in 2011, not really caring for its story as much (Twilight Princess had driven up my moodier expectations), but loving the design, the dungeon puzzles, and most of all the thrilling motion-control combat, made possible by the Wii Remote Plus. It was a new way to play, and the ideas Nintendo came up with to engage the player during battles seemed invigorating at the time. I remember not only thinking, but being very vocal that I never wanted to play another Zelda game with simple button-pushing ever again. I was utterly sold, and I looked for to enjoying this iteration for years to come.

What a difference a replay makes. Look, the bottom line is that everything I raved about back then was frustrating drudgery the second time through. I kept waiting to fall back under the spell, but it never happened. That incredibly long intro/tutorial spent training to fly your pet bird started me off on the wrong foot (for all the emphasis in the beginning, the mechanic is never a major factor), endless backtracking over empty skies and repetitive landscapes had me pining for Wind Waker‘s open seas, and worst of all, my own sword failed me. Swinging the wiimote produced nothing but random hacks and slashes, eliminating all strategy and fun from what had previously been so cool. It was disheartening, to be sure, but also annoying, exasperating, and infuriating. Still, I plowed ahead, determined to see it through until its mercifully short and easy end. As if for one last cruel joke, the wiimote glitched out one last time after the credits rolled and caused me to accidentally save over my file. A perfect ending to a miserable completion. The only positive I took away was that strangely enough, I actually liked the story more this time around, thinking it elegantly and subtly told. This however, was not enough sugar to coat the bitter pill I just swallowed.

I know I will never play Skyward Sword again. Ever. While it does have some neat ideas (except for the Silent Realm, which still sucked), I’m not willing to put myself through the risk of poor device execution again. What’s strange to me though is the steep decline of my favor in the other aspects as well. What happened? Was I completely wrong the first time around, or had my game tastes really changed that much in only a few years? Did I end up on the wrong end of fickle controls, pure unlucky coincidence leading to a negative reaction that seems unlikely to ever be overcome? Or was the newness of swinging the wiimote enough to compensate for mediocrity? I just don’t know. It’s confusing, but the feeling and my distaste both remain.

I’m going to say this right off the bat: I’ve only played about 5 or 6 hours of Majora’s Mask, but that was enough to see me do the unthinkable and close my 3DS for good, leaving it the only Zelda game since The Adventure of Link I haven’t beaten. If insane NES difficulty had been the reason for this, perhaps MM also would not have made this list either, but alas, that is simply not the case. Majora isn’t hard; it just isn’t fun to me in the slightest.

Why Nintendo thought that the combination of the Zelda universe and the feeling players get during the last 100 seconds of a Mario stage would make for a great entry in the hallowed franchise is beyond me, but the result is something shows you a fantastically imagined, creepily beautiful world to explore and build an experience in, then goes all Groundhog Day and yanks that idea away, forcing limitations upon Link to ensure that he’s constantly looking at his watch and has to repeat things over and over again until he gets them just right, and- time’s up! Oh well, tomorrow’s another day….except it’s not. Yeah, that kind of thing sure looked fun and not at all depressingly maddening for Bill Murray when he was in a similar situation. 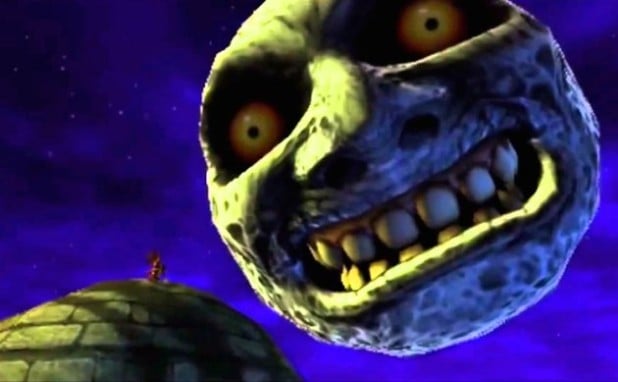 Huh. I must have accidentally taken a selfie after getting kicked out of the first dungeon mere seconds from beating it.

Because of this design requiring players to rush, rush, rush or restart from the beginning, the designs of the dungeons are so basic as to seem like tutorials for some better game. They have to be, obviously, or they couldn’t be completed on time, but that robs Majora’s Mask of much of the puzzle-solving pleasure that the franchise is known for. Discovering an ancient temple and slowly unraveling the complex mystery inside is a relaxing, immersive way to evoke a sense of adventure, but when the objective is no longer just to find the boss and claim the treasure, but instead to quickly defeat everything before an arbitrary deadline, then completion, not adventuring, becomes the focus. This creates tension, sure, but the manufactured sort that isn’t compelling. There’s nothing to sink your teeth into in MM, and forget about smelling the roses. It’s time to reset the clock and watch all that you’ve accomplished be nullified, as if it never happened. Now that’s what I call satisfying!

Look, I get that many players love the tension and existential undertones of Majora’s Mask, considering it to be among the best, if not actually the pinnacle of Zelda games. I’m glad it exists, if only because I prefer a Nintendo that experiments to one that doesn’t, but I’ve never been so irritated by a game’s central conceit so much that I just quit. The Zelda series is by far my favorite, but bearing no resemblance to the ideas that make the series so long-lasting, Majora’s Mask just doesn’t belong, and is by far the worst on my list.

Agree with my picks, or are you completely infuriated by them? Sound off in the comments below!