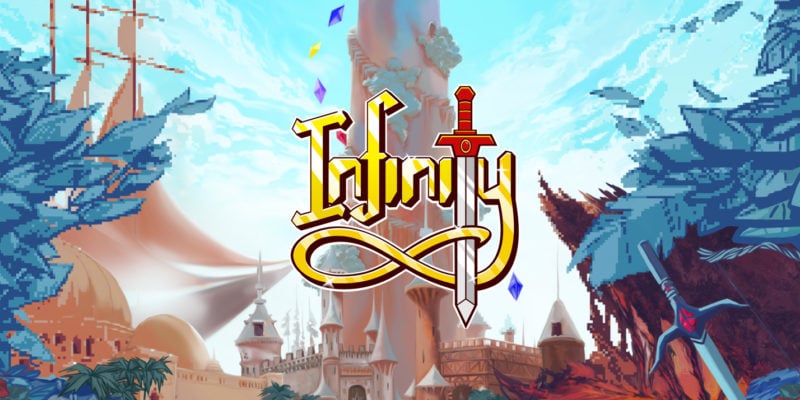 The resurgence of retro gaming has taken the video game community by storm over the last few years, including Game Boy games which have seen a rise in popularity as of late. Back in 1999, a game by the name of Infinity was being developed for the Game Boy Colour by Affinix Software, but the game was cancelled before it got the chance to see the light of day. Game developers Retro Modding and Incube8 Games are taking the notion of retro gaming to the next level by bringing back this cancelled title, completing it and finally giving it the release it deserved twenty years later. It would seem that not all heroes wear capes after all.

Infinity was being developed from 1999 to 2001 but this was pretty late in the day for the Game Boy Colour as the Game Boy Advance was making waves following its release in 2001. This led to the official cancellation of Infinity in 2002 before it was able to be finished. The game was never forgotten though, with an incomplete version of the game being available to download as a ROM in 2016. This then led to the Retro Modding Team- alongside some who worked on the game originally with Affinix Software all those years ago- to make the decision to finish what Affinx started two decades ago. I think this is a testament to how passionate we as video game fans can be. The team at Retro Modding are breathing life back into a project that was considered long lost and for that, I think we can all be grateful and respect their love for the games no matter what decade they come from. Infinity will be receiving a Kickstarter campaign in the summer so if you’re interested in helping out, make sure that you subscribe to the official newsletter for updates over on the website here.

Check out the press release below for more on Infinity’s long awaited release.

After 20 years in development limbo, Infinity, a Game Boy Color Game first showcased at E3 2001, will finally be published.

Retro Modding and Incube8 Games to launch a Kickstarter campaign to finish the game development and publish the game in its original cartridge format.

Montreal, Canada, March 3 2021 – Developed in 2001, the video game Infinity will finally get a physical publication for the Nintendo Game Boy Color. Part of the original Affinix team and fresh faces, overseen by Canadian company Retro Modding and its subsidiary Incube8 Games, will resume the development. The crowdfunding campaign is set to launch on Kickstarter in June 2021.

Infinity is a much anticipated game that has kept its fans and the retro gaming community talking for the past 20 years. It is representative of the end of the Game Boy Color era and would be one of the very few non-Japanese RPGs developed for the Nintendo Game Boy system.

Originally developed by Affinix Software from 1999 to 2001 towards the end of the Game Boy Color’s retail lifespan, the shift in the market towards the Game Boy Advance (released in 2001) resulted in publishing struggles for Infinity. As a result, the original Affinix team went their separate ways, leaving Infinity a what-if that was formally cancelled in 2002. Following repeated interest in what was seen as one of the last Game Boy Color games, an unfinished version of Infinity was released as a free ROM in 2016, and despite generating a lot of buzz, remained unfinished.

Now, for the 20th anniversary of Infinity, Incube8 Games has assembled a team to finally complete the game. Supported by Retro Modding’s expertise and supply chain, their goal is to publish Infinity as a physical cartridge to let players experience the game as it was meant to be played, but a digital ROM version will be released as well to make it accessible to all players.