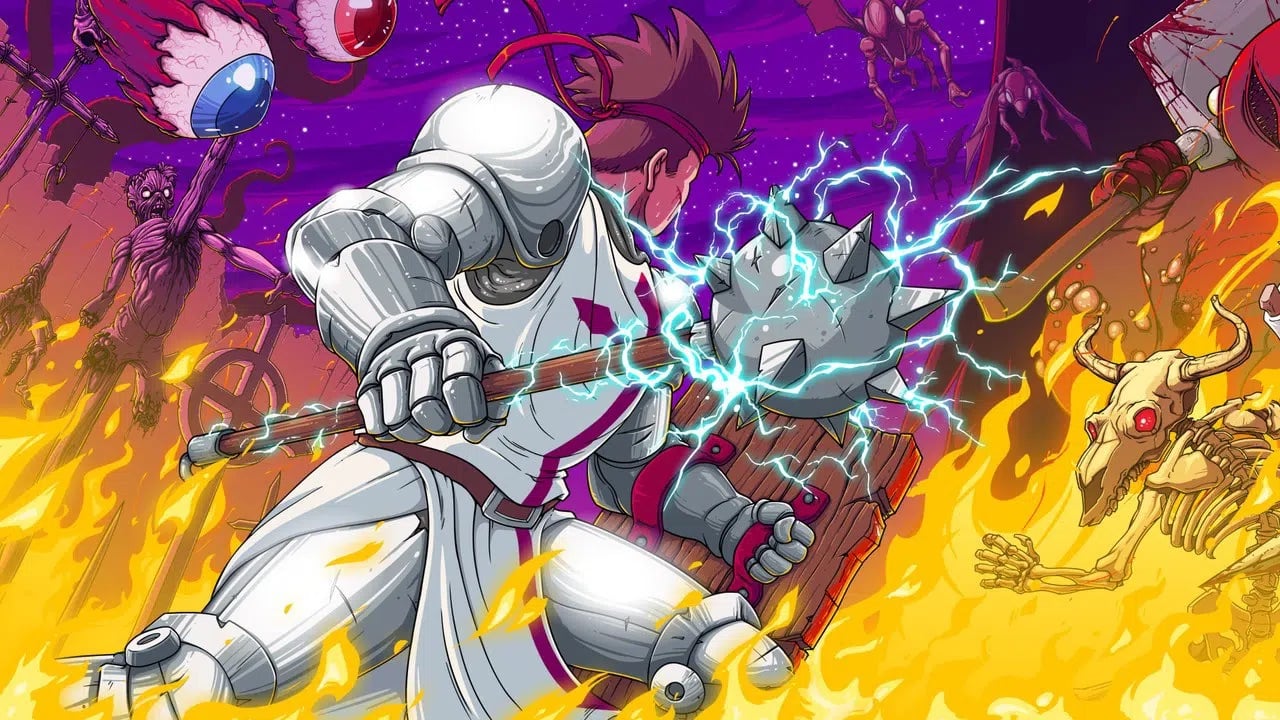 Homages and spiritual successors in video games are a dime a dozen. Often, a retro-inspired game will have the aesthetic trappings of an old-school title, like 8-bit graphics or a chiptune soundtrack. But Infernax, a Castlevania-inspired side-scrolling gorefest from The Arcade Crew and Berzerk Studio, takes the whole concept to another level. About as subtle as a mace to the face, Infernax is for players who like their games fiendishly difficult, bloody as hell, and endlessly rewarding.

Infernax is inspired by classic Castlevania, but also by its much-maligned sequel, Simon’s Quest and the role-playing elements from Zelda II: The Adventure of Link. Player character Alcedor (who wears a headband almost exactly like a certain member of the Belmont clan) returns home from the Crusades to find his homeland overrun with all manner of hellspawn.

With his trusty mace and the help of the local clergy, Alcedor resolves to defeat five elder demons and break the seal the blocks the entrance to a mysterious infernal stronghold. To do that, he’ll have to defeat demons and clear castles using his might and magic, earning experience points and gold to purchase and upgrade different skills. Along the way, Alcedor receives side quests from beleaguered townsfolk, shady ruffians, and even monstrous skeletons.

Heavily influenced by games from the past, Infernax pays homage to its predecessors. But what makes a successful throwback? Berzerk Studio and writer Mike Ducarme think they have an answer. There are design elements they missed from the games of their youth, namely the hostile indifference of classic 80s and 90s platformers. Infernax does not give a damn if players find its platforming difficult or the information delivered by NPCs hard to parse. The game exists as an object unto itself, to be poked at and dissected until its every secret is laid bare. However, in doing so, the developers hope that players might discover a love for retro-styled difficulty they didn’t know they had, or rekindle a love they thought was left behind.

Everything Old Is New Again

Infernax looks and sounds incredible, like a forgotten gem from the NES era. The pixels are crisp and movement is sharp. The soundtrack is a delight, full of crunchy riffs and all the screechy bleeps and bloops from the good ol’ days. Every theme is memorable and catchy, and the sound effects do a great job of communicating information. The Arcade Crew may be playing to an extremely specific audience, but it’s the kind of performance that transcends its niche.

The difficulty is a hurdle, but one that is a genuine pleasure to overcome. Players will have to master movement and placement, as being a single pixel out of place often means instant death. Alcedor’s attack is short-ranged, meaning that he’ll have to get up close and personal with the ugliest pixelated demons this side of Broforce. When the final blow is struck, enemies explode in a cascade of viscera, showering Alcedor with blood and guts that stay with him until he reaches a save point, or dies. It’s a thrilling, disgusting touch that makes Infernax that much more memorable. The developers wanted this game to feel as though it were designed by a kid with an overactive imagination, and they absolutely succeeded.

A sidescrolling semi-open world, Infernax is packed full of secrets that are impossible to discover in one playthrough. From hidden dungeons to powerful spell upgrades, there is much more to the uncover than appears at first glance. Even the simple binary choices presented to the player from time to time ripple outward to have lasting effects on future available side quests. This is a great way to encourage replayability and encourages players to find their way towards multiple endings. Endings have rewards, too- the community will surely have a blast trading secrets among each other.

There are definitely moments where Infernax feels deliberately hostile towards the player. Instant death when the player touches the water, enemies who manage to move slightly out of range of Alcedor’s attacks before launching their own, and side quests with completely unpredictable outcomes may feel unfair. But Infernax manages to mitigate the sting of difficulty with a number of modern touches. Save points are conveniently placed, and also serve as upgrade hubs and healing stations.

Though Alcedor only has a limited number of “continues” before being sent back a save point, that number can be increased by simply purchasing more from local merchants. And while improving Alcedor’s hit points, mana meter, and damage output costs more and more experience points with every upgrade, there are plenty of opportunities for players to grind to their hearts content if they so choose. There is even the option to bump the difficulty down from Classic to Casual, if players grow frustrated from losing all of their accumulated gold and experience points between deaths, though doing so means that players cannot return to Classic difficulty for that playthrough.

There is a growing appetite for games that feel tough, but fair. Infernax is exactly that. While the initial playthrough may be rough going, players will rapidly find their groove and settle in to smash demons and grow stronger. Even the most unforgiving platforming sections are easily navigable with enough practice. A bit of advice: seek out every available spell. Some surprising moves give Alcedor incredible powers that make later battles against even Elder Demons much more manageable.

Players who master Infernax will likely be inspired to play through the game, again and again, to make different choices and push their own limits. This game never stops feeling rewarding, and the quest to fill out the demon logbook is a long journey that always feels engaging. Though the climb is steep, the view from the top of the mountain is beautiful. Players might find the brutal start off-putting but as their skills grow, the sense of satisfaction deepens. Infernax wears its difficulty proudly on its sleeve. Those who steel themselves and pay their penance to the retro gods will find themselves fulfilled.