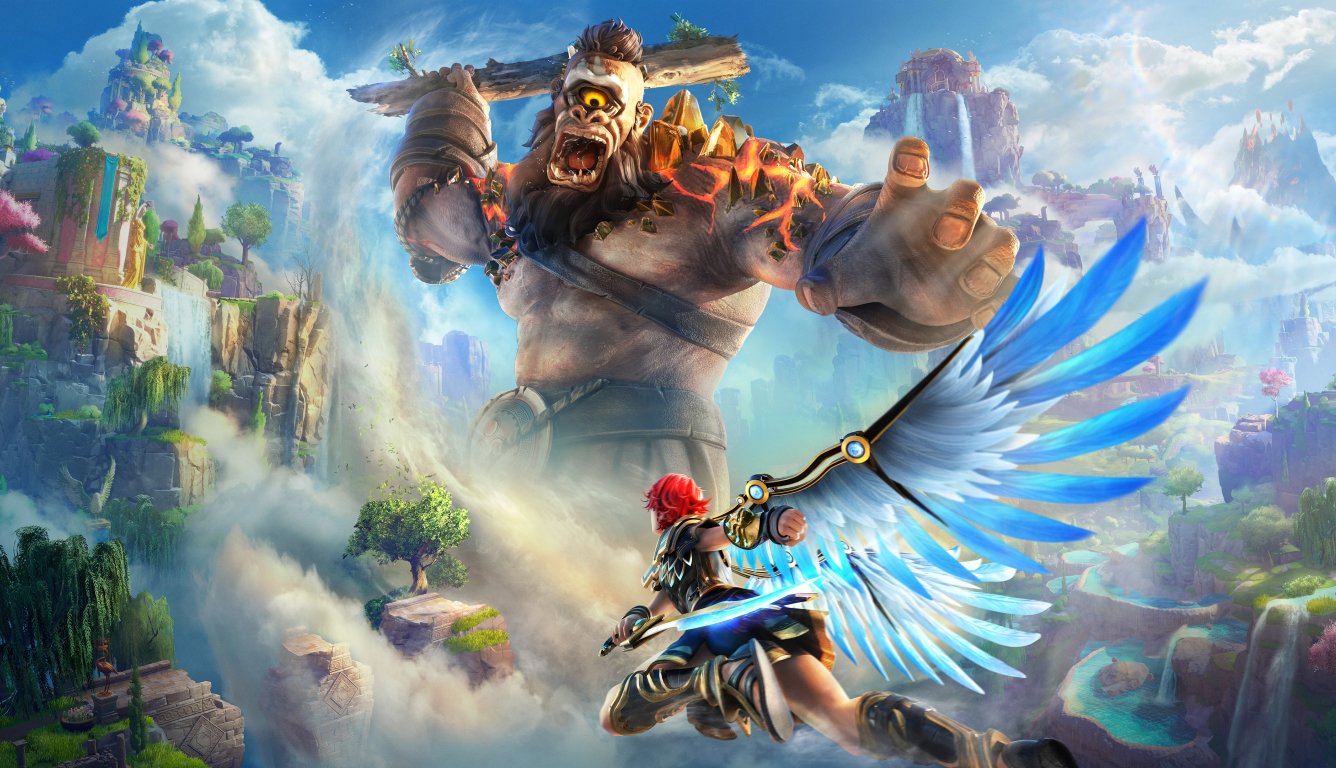 Ubisoft’s Gods and Monsters was seemingly going to be the Assassin’s Creed: Odyssey team’s next major ancient mythological title, but after an odd development that constantly flew off the public radar and rarely had any information surfacing since its announcement, Immortals Fenyx Rising finally found its footing as it proudly made itself comparable to a certain Nintendo Switch title that needs no introduction. The result is an open-world action-adventure title game that distinctly attempts to recapture the magic of The Legend of Zelda: Breath of The Wild through its gameplay, while it struggles to create a story rooted to Greek mythology akin to the comical likes of Kid Icarus: Uprising. It rarely is able to multitask both its inspirations, but the former is truly the only one pulling it apart as it manages to always create a thrilling exploration ride with entertaining combat.

Immortals Fenyx Rising struggles under the expectations of its inspirations.

Immortals Fenyx Rising contains a rather flat narrative told through two charismatic and lovable narrators. The game focuses on Prometheus telling Zeus the story of a Greek soldier named Fenyx who has washed ashore unsolidified after the titan Typhon broke from his bounds in Tartaros to bestow chaos upon the world. Being their last remaining hope, it is your job as the customizable titular hero to restore some of the gods to their former glory and defeat Typhon to free your kind and the rest of the world from his dark curse. On one hand, Prometheus and Zeus constantly steal the show as the vast majority of their writing contains hilarious narrations and pokes fun at a mythology you should likely read up on before diving in. Their banter and arguments are continually keeping the world alive as they talk similarly to the hilarious cast of Kid Icarus: Uprising. It is nowhere near as successful in any regard, but it still works in hundreds of situations.

On the other hand, we have the actual story players are controlling being the story of Fenyx himself. Fenyx’s tale is a complete contrast that feels rather out of place from what players are initially introduced to with Prometheus and Zeus. As if his- or can be her- horrendous voice acting was not enough, an overwhelming amount of the characters helping Fenyx never shine as they all are presented with no real stories or backgrounds. While there are stakes established at the beginning for the protagonist, we are never able to emotionally feel for the character as they never seemed to worry about the catastrophe currently amidst. The jokes never land with the hero and the facial animations are absolutely laughable at times. When the writing is pointing fun at itself, it comes off as a complete slap in the face.

Unlike its story and direction, what Immortals Fenyx Rising does get right is creating such an enjoyable world to explore. Ignoring the fact that the atmosphere is a graphical beauty and runs smoothly for the most part on just about every platform, the landscape is jam-packed with unique locations to explore and tons of enemies to slug around. The game follows a lot of story beats, but that does not stop it from being inflexible for the player. The only setback to its sense of freedom is that unlike Breath of the Wild, to complete the campaign you are required to save the four gods before tackling the final boss. It is still an open-ended experience as you can take on tasks in whichever order you would like. If you do not like a section of the game you are stuck on, you can come back to it at a later point.

The most whimsical aspect fueling Immortals Fenyx Rising has to be Gareth Coker’s great music score that accompanies this interesting world. For the last few years, Coker has absolutely knocked it out of the park time and time again with his finest work and this is yet another addition to his list. Just like how he succeeded with bringing the fantastical Ori and The Blind Forest along with its sequel’s atmosphere to life, Coker is a crucial part of the heart and soul of Immortals Fenyx Rising. Without his majestic orchestrations, there is no doubt in my mind that the game would not be the same. His music simply adds a layer of needed depth to the Greek-inspired world as he geniusly takes advantage of specific instruments and rhythms that help keep the game’s atmosphere seemingly moving no matter if it is in ambiance or battle.

Like its overall world-building that is a hodgepodge of problems, gameplay can be a mixed bag of unpolished indecisiveness.

Gameplay is undoubtedly where Immortals Fenyx Rising thrives the most as it provides players with pliable combat that is able to mix several different ways of distant clever and headfirst stylized patterns. However, on top of there being nothing special to provide players with, the controls often feel unanchored as they lack a specific degree of polish needed for its open-world setting. Your typical combat features such as slashing with a standard blade, spinning a heavy axe, firing an arrow with your bow, and evading or reflecting an attack are all fine. Upgrading your abilities, gathering resources, and crafting is all that you would expect. Some of those specific aspects of controlling Fenyx is what often gets in the way.

While general fighting and button combinations feels natural, climbing, gliding, and jumping can get rather shakey. Ascending a cliffside can already be meandering enough, but attempting to pull of jumping from a wall to get a boost can take hard unwanted button presses. Gliding can be so slow for an overwhelming amount of the game to the point where you might as well just run on land towards your destination. The only part of the combat itself that can feel rather wonky at times is using controllable arrows which can also sometimes be an absolute pain to traverse in puzzles- using these things in combat is let alone impossible so you might as well just not try to begin with. Arrows are not as smooth sailing as say Batman’s remote control Batarang in the Arkham games as moving through enclosed spaces can be extremely difficult, but from far distances it gets the job done.

Speaking of, what the game manages to do strikingly well is provide players with a wealthy amount of herculean puzzles, albeit only during the first few hours of the game. There is seriously no ability wasted in the entire adventure when it comes to exploring rifts that are packed with tricky challenges. While some of these dungeons contain competent bosses, the enigmas are really the ones that bestow audiences with a legitimate obstacle. The only problem with the puzzles is the fact that they can grow rather stale as players begin plowing through the title at a rapid rate. That originality you constantly see in Breath of the Wild’s shrines can go missing quickly here. The majority of the puzzles either contain moving an obstacle, platforming, or gently shooting arrows in specific directions. Again, during those opening hours, there is a great variety of experiments going on, but once you have seen every puzzle type, the charm starts to wear thin towards the game’s back half.

Immortals Fenyx Rising is no Breath of the Wild replacement- not by a chasm of a long shot.

For any user not currently holding a Nintendo Switch, Immortals Fenyx Rising is not exactly the perfect stand-in for The Legend of Zelda: Breath of the Wild, but it is something familiar for those seeking a title akin to its gameplay formula and open-world extravaganza that promises a flexible adventure. It is absolutely in no way able to hold a candle to that same phenomenal experience from over three years ago, but its inspiration always remains clear as it tries to do so. If it were not for its odd direction, dull cast of characters, and lack of overall control polish it could potentially be a worthy title of filling your time, but without those aspects, it comes off as some wearisome copy-cat consisting of Assassin’s Creed’s biggest game design problems. That variety and grand scale of adventure players yearn for are not entirely here.

It is a hard recommendation especially for Switch users considering Breath of the Wild can be found at the same price, but nonetheless, for what it is worth if you are on any other platform, can sit through that opening tutorial along with the core story that is a snooze and are willing to deal with some of the game’s flaws, the main playable experience will be almost what you are looking for. It is never able to match the perfection of its inspirations, but it is to some degree a substantial alternative at times. Immortals Fenyx Rising is ultimately something though that should only be picked up at a sale price. There are plenty of other cheap Breath of the Wild alternatives to fill that void of yours currently whether you have played it or not. Immortals Fenyx Rising will not fill every inch of your needs.