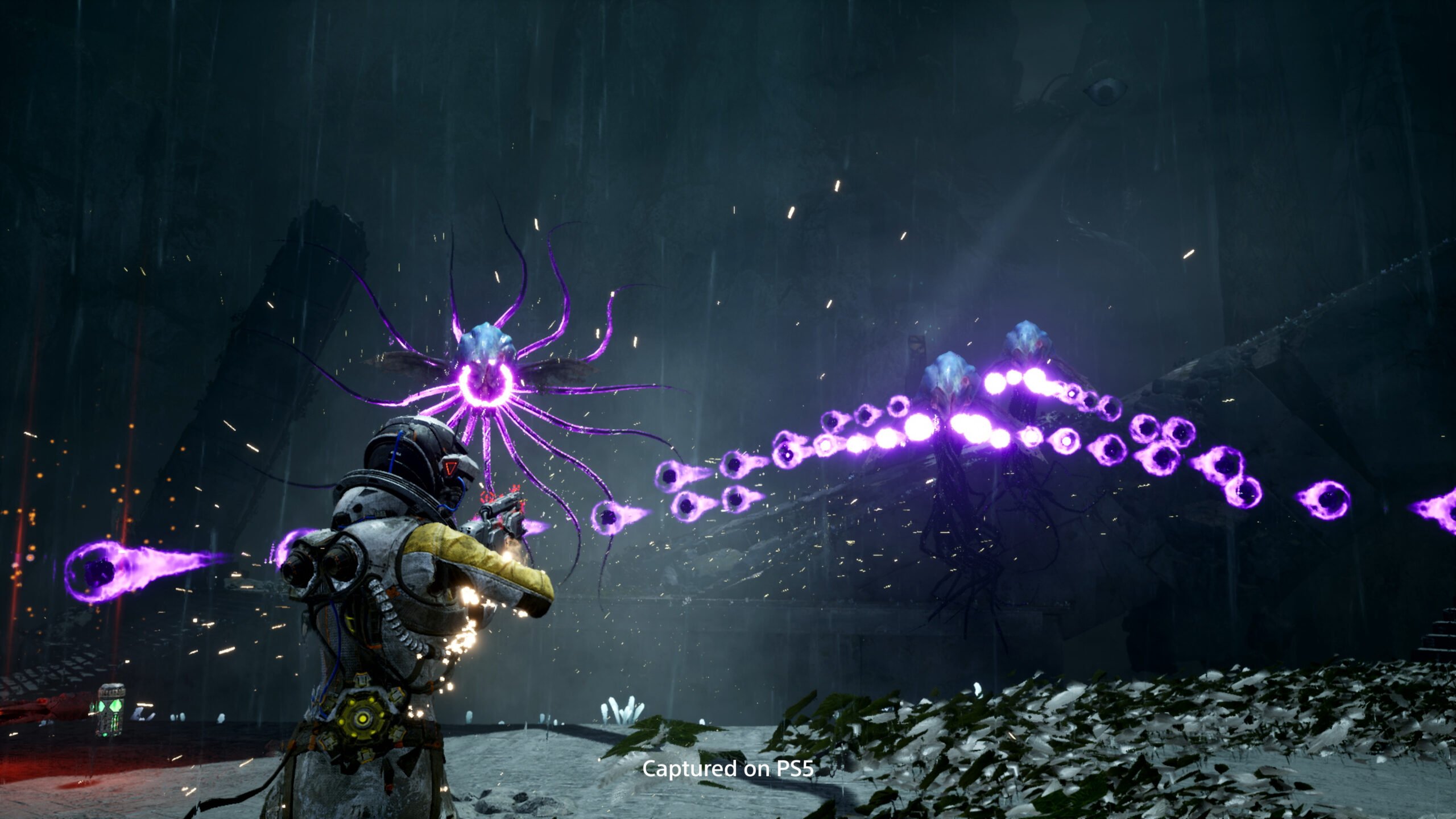 These Tips should help guide your way through Returnal

Housemarque‘s latest PlayStation 5 exclusive Returnal might feel overwhelming at first. Every biome has its share of deadly flora and fauna, packed full of secrets and collectibles to aid the player. Selene is tough, but even the toughest Astra Corporation Scouts needs a little help. Each biome has procedurally-generated elements, including random weapon and item drops, ensuring that while different runs might be similar, they are never the same. Returnal requires players to manipulate several different systems to survive, and while there’s a lot to keep in mind at any given moment, a few tips can set players on the path to victory. Yes, the game is hard, but it doesn’t have to be that hard if you know what you’re looking for. The video tutorials provided in-game are extensive and helpful, but here are a few things the game does not tell you.

Use the Dang Minimap

One of Returnal‘s most useful features is the always-present, Metroid Prime-esque minimap. When the player walks through a door to any new area, every collectible, container, exit, and enemy is immediately visible. This is helpful in the short term- being able to instantly discern what an enemy’s elevation is in relation to the player provides an immediate edge. But for players seeking collectibles, the minimap also marks things like artifacts and Xenoglyphs. Rather than opening the pause menu and setting a waypoint to a distant collectible, the player can quickly see what’s near them and act accordingly. Savvy players can enter a room, scope out weapons and health upgrades and dash to them without much of a fuss. This is particularly useful in challenge rooms, those doors that can only be opened by shooting down a creature attached to the door; they’re often full of valuable Resin and healing items, though packed full of hostiles. Run in, see where the health is, and vacuum it up like Selene is holding a Hoover.

You Can Retreat at No Cost

Most rooms in Returnal are procedurally generated. That means that while the player pretty much knows what enemies they’ll be facing based on the biome they’re currently in, they never know what’s in a specific room until the enemies spawn. But barring the challenge rooms and boss fights, players have almost complete freedom to run away from fights if they’re ill-prepared. Players can walk up to an area, peek in, see it’s full of those annoying dive-bombing bat aliens, and NOPE the hell out with no ill effects. Nothing wrong with returning to an area after being better equipped.

Save Your Keys for Locked Doors

There are unlocked containers and doors that Selene can open and walk through, respectively. But eventually, she will come across things that can only be accessed by using consumable Atropian Keys. Keys are fairly uncommon, especially in later biomes. So if the player stumbles across a chest with a red lock, the impulse is to open it right away and see what’s inside. Wrong. Hold onto to those keys and use them for doors. The items in a locked container might be valuable- they might even be the elusive Astronaut Figure or Child’s Watch, basically free revivals- but they don’t compare to what might be behind a locked door. There is at least one instance of a permanent traversal upgrade hidden behind a locked door in the fifth biome that is completely optional, but finding it is a game-changer for future runs.

Bring A Little Money Into the Secret Hole

Every few rooms, the player might stumble upon a hidden area. One of the few things not marked on the minimap, these breakaway floors glow gold and once recognized for what they are, become unmissable. All the player has to do is walk on top of them, then the floor falls away and Selene tumbles down to a hidden area, that they can only access once. They can’t leave and come back; once they see what’s inside, they can collect what they see or leave. These little rooms are generally full of rare artifacts, Obolites, or powerful weapons. But every now and then- and there’s no way to know when it’ll happen- the hidden area will have an item fabricator, Returnal‘s equivalent of a vending machine.

Fabricators give players access to extremely powerful upgrades, from artifacts like the Blade Balancer (increases the effectiveness of the already-powerful melee attack) to stat augments, like better repair efficiency or even an upgrade to base weapon power. However, these fabricators aren’t cheap. It’s entirely possible to find a breakaway floor within two or three rooms of a run, fall down into it, and not have enough Obolites to make use of the fabricators within. Finding a breakaway floor is always welcome, but it’s recommended to not access them until the player has around two or three hundred Obolites in the bank. That way, they’re prepared for the best possible scenario.

Another thing Returnal never explicitly spells out: there are Obolites everywhere. In one Scout Log or other, Selene mentions that the flora of planet Atropos absorbs Obolites, somehow. So some breakable pods contain currency. Defeating enemies is the easiest way to earn cash, but taking the time to scrounge around can really fill Selene’s wallet. But what’s also effective is keeping an eye out for golden-eyed Sentient statues. The planet is home to an ancient, deceased alien civilization that has built awe-inspiring structures and machines. They’ve also apparently hidden Obolites in ten-foot-tall monuments that can be easily destroyed, netting the player a nice cache of coin.

Take a Ride on a Tentacle

The world of Returnal is not without traps to circumnavigate. Laser fields and expanding energy rings are abundant, and there are even entire areas that disable the dash function of Selene’s suit. There are also organic hazards that seem designed to impair movement, like the dangling, dangerous tendrils that hang down from the ceiling. But upon closer examination, these tentacles don’t actually cause damage if the player dashes out of their clutches. For Scouts who want to reach higher platforms but haven’t unlocked the suit upgrade that allows that kind of traversal, taking a little trip on a tentacle can lead to some great items. Just remember to dash away before being drawn all the to the top.

Locked Gates Don’t Have to Stay Locked for Long

Occasionally Selene will stumble upon a container hidden behind an impassible barrier. These doors are unbreakable. And while it’s easy to see what’s behind them, the contents remain tantalizingly out of reach. But there is a simple way to reach that treasure- a simple button, often just around the corner and out of sight, can be shot to open these doors. The buttons are often hidden behind a statue or just out of sight, but the only effort required is to shoot them once and the door unlocks. It’s easy to assume that these doors can only be opened with a special tool, but they easily accessible from the very start of the game if players know what to look for.

Return for the Cubes

In every biome, there’s one Datacube Terminal, which converts rare Datacubes into new items that can be used in future runs. Selene can only carry one cube at a time, and they’re often in extremely difficult-to-reach areas. Upon finding a cube, the instinct is to make it to a terminal at all costs. But sometimes, in the journey from one end of a biome to another, Selene stumbles across more than one cube. Does she swap out the one she’s currently carrying for the one she just found? Or carry forward, making the agonizing choice to leave the rare cube behind to be lost upon moving to a new biome? Fortunately, the player doesn’t have to make that choice. Making it to the terminal and turning a cube into a new item frees up the slot, and the player can simply go back and collect any other cubes they may have found. Just do not forget the room where the cube was left, and make use of any available Translocators.

You Can Have a Little Malignancy, As A Treat

One of the biggest risks in Returnal is interacting with Malignant items. These purple-hued containers and items carry risks, with a chance to inflict Selene’s suit with a debilitating Malfunction. This might lead players to avoid Malignant items whatsoever, but that’s a mistake. While the risk of a Malfunction is present, there are ways to mitigate that risk with Parasites and consumable items. Often, a Malfunction can be cured by performing something as simple as defeating three hostiles or fabricating an item. The risks of taking on a game-changing Malfunction are certainly there, but taking risks is part of the fun of Returnal. At a certain point, engaging with this risk/reward system is necessary, and figuring out how to progress, even with the weight Malfunction, is extremely satisfying.

You Can’t Take It With You

At the end of the day, Returnal is a run-based game. Selene will inevitably die, and have to begin her quest to break the cycle again. There are very few items that carry over between runs, so the player is on a hot streak, don’t be afraid to keep it going. Use those consumables. Spend those Obolites. Scour every corner of every biome before moving on the next, especially if trying to make it to the end. Some area layouts and enemy groupings are certainly easier to deal with than others and if luck is on Selene’s side, she might find a powerful artifact early on that makes the rest of the run easier. When the momentum kicks in, ride it all the way to the bank. And most importantly, don’t get discouraged. Selene has been stuck in a time loop on an alien planet for who knows how long, but she never gives up. The least the player can do is support her efforts.