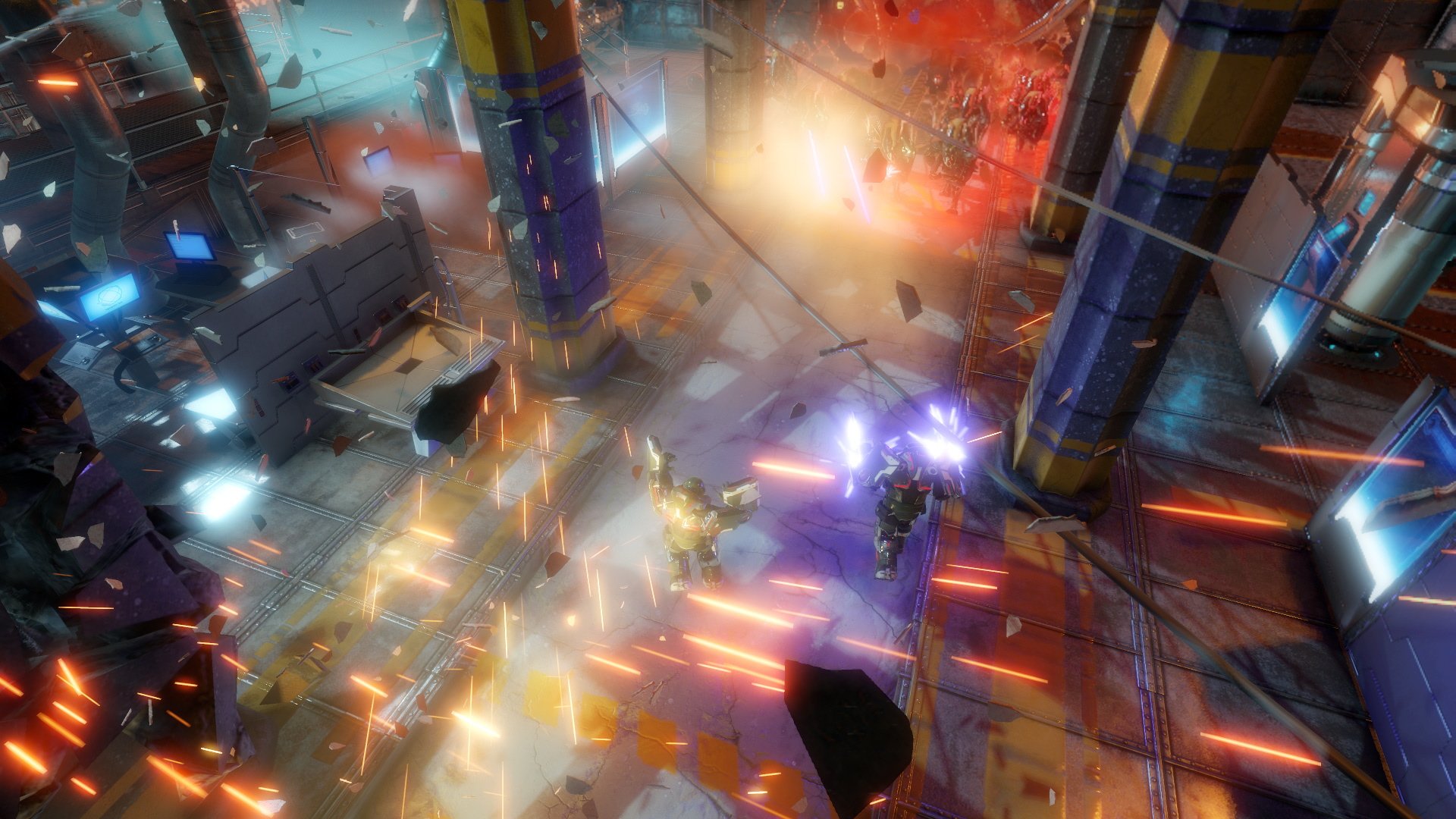 In recent years, the zombie craze has strangled what was once the sci-fi king (and arguably a more interesting subject matter): extraterrestrials. In late 2010, Finnish developer Housemarque released the top-down, twin-stick shooter Dead Nation, which rode the wave of zombie love to favorable reception. It didn’t bring much in the way of progress for the arcade style, but it was a game that just worked, and was fun. Three years later and four more games on their CV, and the stylish, side-scrolling shoot ’em up Resogun debuted with very high marks and fans clamoring for more voxel action. I don’t imagine Alienation was conceived through one man asking for a Dead Nation/Resogun lovechild, but the influence of those games is palpable, and the skills sharpened through those titles are on full display.

Alienation is a top-down, twin-stick shooter in the way of Dead Nation. You are given the option to pilot one of three mech-like classes, the typical flavors of an RPG: tank, rogue, or medic. From the first time my boots hit the dirt, I noticed the satisfyingly responsive controls, a staple of Housemarque. An arcade title such as this requires tight and quickly-learned controls as the game wastes no time in throwing mobs of zombie-aliens at Earth’s only hope. Weaving in and out of the crowds as I painted them with neon blue lasers was an adrenaline surge not unlike the kind I experience when my favorite basketball team is at the wire versus their conference rivals. It’s these moments that compelled me to return to the alien-invaded earth early on. Until I became acquainted with the co-op, that is. Though you could spend your entire Alienation experience going solo, online multiplayer is where the game shines brightest. Arcade games and playing with friends are inseparable ideas, as there are few things in the world more joyous than devising with a friend how to solve a challenge. Marching in a line toward the alien occupiers worked when one of the game’s random challenges brought the seemingly unending swarm of alien-sprinters, but a boss fight required me and my friendly mech companion to lightly strategize about how to fell the kaiju wannabe. The cooperative/competitive multiplayer is a system that is old, fulfilling, and could only be improved in one area: couch multiplayer. For those who played and enjoyed Dead Nation, like me, the local multiplayer was the primary factor that kept the game on hard drives long after the initial completion, but Alienation has no local multiplayer yet. As one who is strongly opposed to imposing expectations and requirements on a game or piece of media—I hope to judge the game on its own terms—Alienation is one of the few exceptions. A twin-stick shooter that leans heavily on its party-playing possibilities but currently lacks any sort of local multiplayer is a game that feels like a large chunk of itself is missing. As much as Alienation feels like a gift to those who miss the arcade games of years past, not being able to invite a friend over for a time of green man slaying is remarkably disappointing. While Housemarque has confirmed that they will eventually release local co-op, at the time of this review, it’s still unavailable.

As your enemies fall and you come ever closer to saving our planet, new weapons and abilities are made available to assist in the grand liberation. Each class is designated three passive and three active skills that you upgrade using the experience earned from level completion. While the leveling isn’t extensive, it’s a serviceable enough system that will temporarily satiate the RPG-hungry. Finding and upgrading new weapons is as important a task as developing the skill tree, possibly more so, but doesn’t stand out as a deep loot dynamic. For a $20 title, it fits well.

One of my favorite ever Xbox Live Arcade titles was a gem released in 2011 by Housemarque: Outland, a beautiful little platformer that never got the respect from my gamer circle that I thought it deserved. Outland featured a literal light versus dark narrative where the hero could switch sides on the fly to adjust to the enemies that were being engaged. Because good and evil were physical entities—represented by blue and red objects, respectively—creating a bright and engaging world defined by virtually two colors alone required there to be a dazzling array of effects to ensure that the player didn’t tire of the two-color palette. Alienation is dazzling in a similar way. Every shot fired has a great, punchy sound and results in an alien spewing neon pink ooze, if you’re accurate. Shoot that car to the left of the gang and you can expect a violent, fiery death for the outsiders. If Alienation is only remembered for one aspect, the visual effects wouldn’t be a bad thing. So the game goes. Dodge the attacker, fire at the two nearest, sprint to your objective. It’s a game of maneuvering correctly, lining your shot, and hoping your buddy gets off work soon to jump in. The challenge is steep but fair. Even on the most difficult mode, I never felt like I was given an impossible task. A frustrating task, sure, but one that could be completed with trial, error, and sometimes, adaptation. Experimenting with new weapon types benefited me in places, but I typically found myself reverting to a particular combination of weapons throughout the game—experimentation and exploration aren’t rewarded in any meaningful, long-lasting way. You’ll find what works for you and probably just stick to that. And that’s okay. Alienation is a title that is largely mindless and twitch-based. The only time I really felt like I had to consider what was going on was when me and a buddy kept getting smashed by a boss. “I’ll go right and bullet sponge while you use rockets from behind.”

Somehow, despite what seems like a slew of “mehs,” the game remains pretty darn fun for about an hour a day. The confident and thoughtless demeanor one can enter a level with is a refreshing change of pace from the ultra-immersive and narrative-heavy titles that are on the calendar. While I don’t have much to say on Alienation’s story, other than it being wholly forgettable, it’s the basic satisfaction of elements working well and together that makes this game worth the time.

And it’s pretty. We all love particle effects.

Tyler is a husband and dad who does not neglect his family for games. Well, he may at times, but he never takes back what he says... Unless it's an arrangement to play Rocket League with you later.