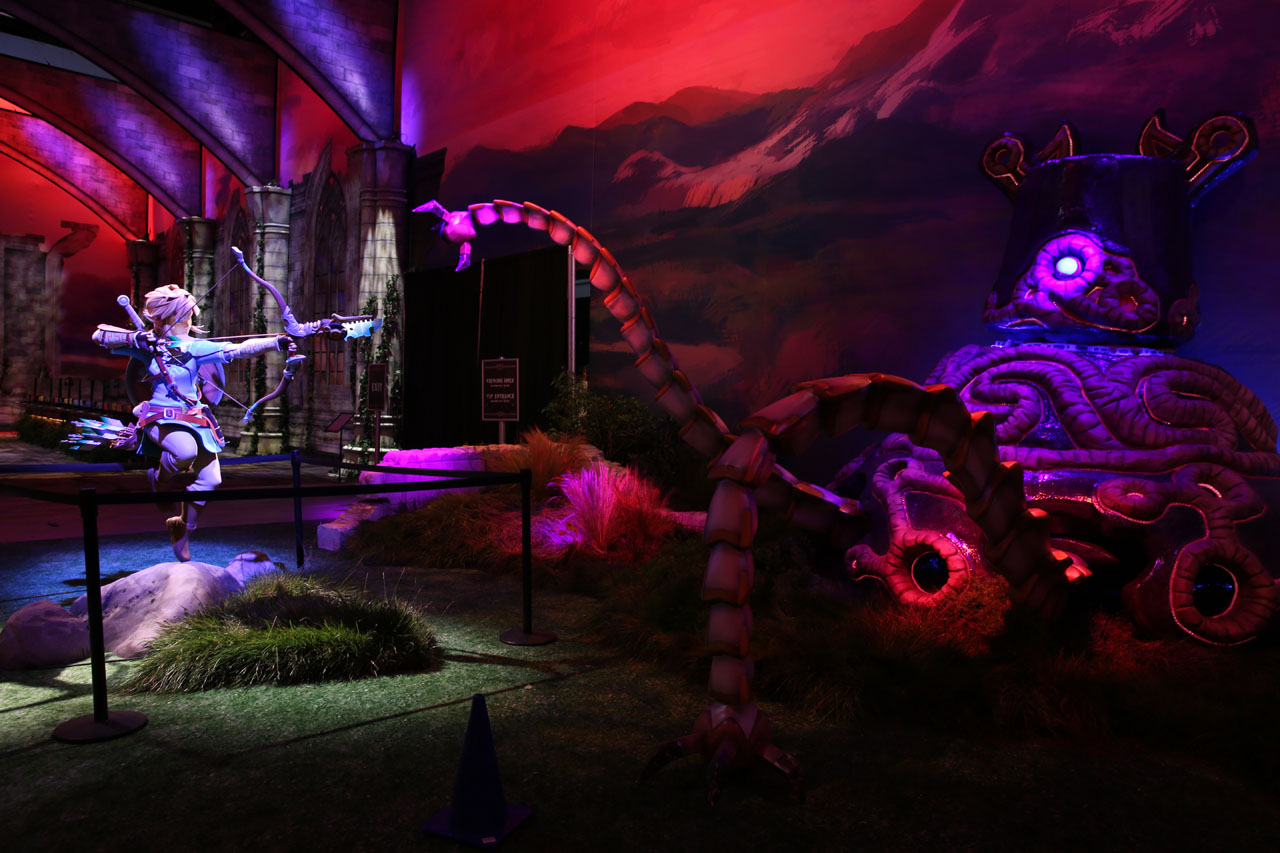 To say that there’s a new Zelda game on the way is an enormous understatement.  Playing the demo at E3 made it emphatically clear that The Legend of Zelda: Breath of the Wild is not just a new Zelda game but the biggest leap forward for the franchise since Ocarina of Time brought the franchise into the polygonal era. 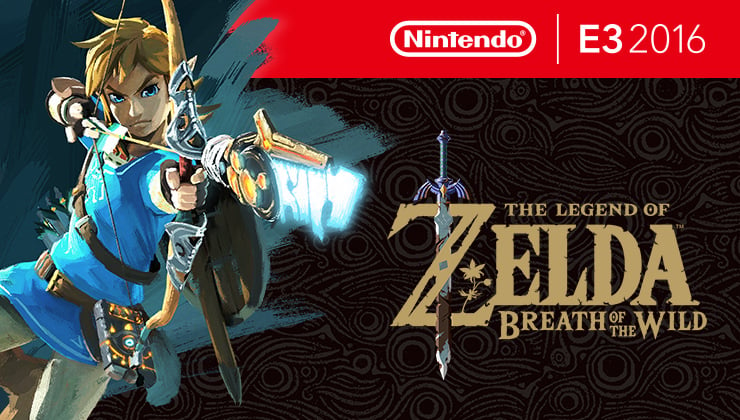 It was instantaneously clear that Nintendo had taken Zelda in a totally new direction with Breath of the Wild.  For starters, this is a jumping, sprinting Link.  Sprinting in to action, I charged head first in to a camp of Bokoblins only to realize that combat wasn’t what I remembered.  Gone are the days of Z-targeting adversaries, backflipping out of the way of incoming attacks, and leaping into action with a tap of the A button when there’s an opening.  While all of those staples are still technically an option, there are many new and varied ways to approach combat.  Link can cycle through a number of tools and weapons picked up with the d-pad.  In my short time with the game I came across multiple swords, including one lodged in to a stone not unlike the Master Sword, an axe that was just as apt at cutting down bokoblins as trees, and several clubs.  These weapons vary in speed, damage, and wear down with time. Consequently, survival is dependent on defeating enemies and pilfering their weapons and goods.  Similar to Wind Waker, these weapons can also become projectiles, so weakened weapons players don’t want to break in the middle of a skirmish, still have their utility.  In terms of defense, players can both block incoming damage by raising Link’s shield, but also parry incoming attacks with quick timing to force an opening in the enemy’s defense, adding yet another layer to an already rich, well-polished combat system. 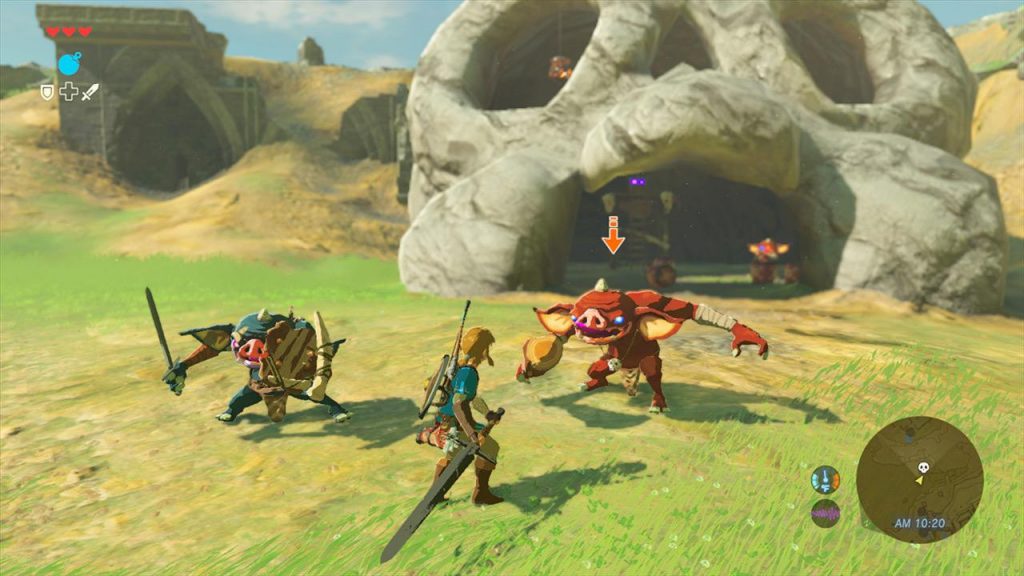 That’s just the most direct combat approach.  Link can now crouch down to sneak around, giving players the option to sneak up on enemies, and letting player’s monitor their noise levels through a noise meter always visible at the bottom of the screen.  When ready, players can strike from the shadows with whatever bow Link’s acquired up until that point.  With the R trigger and bumper dedicated to drawing and using the bow, its never been easier to seamlessly switch from a sword to the ranged weapon to dish up damage from a distance.  Literally on the other hand, the L trigger and bumper are dedicated to magic, or perhaps technology so advanced it appears to be magic. Limited to the abilities added to the new Sheikah Slate’s arsenal, the Sheikah Slate a mysterious artifact Link gains at the opening of the game, Link can activate whichever ability has been selected with a press of the LZ trigger.  Within the demo, I got to toy with two such abilities.  The first was a shimmering, blue bomb that could be lobbed or dropped like in any 3D Zelda game.  This bomb, however, didn’t detonate until I triggered it with the L bumper, making it an incredibly simple but effective trap.  I set a bomb just outside a bokoblin encampment and then drew the monsters’ attention by shooting one with an arrow.  As the rest came tearing toward me, I blew them all sky high. The second such ability was a magnet field of sorts which allowed Link to move metal objects.  Within the demo, this was primarily used to solve puzzles, but I can’t wait to see what other utility the ability will have within the game.  I had an immensely fun time with Breath of the Wild‘s reinvigorated combat system, and don’t doubt that the demo featured only a fraction of the weapons and abilities at Link’s disposal.  For example, with the blue aesthetic of the bombs, I don’t doubt that the blue arrow featured in the first footage from the game will be a similar special ability within the Sheikah Slate’s runes like the other two I got to use.  And I don’t think I even scratched the surface of all the swordplay and abilities the title will feature in the end. 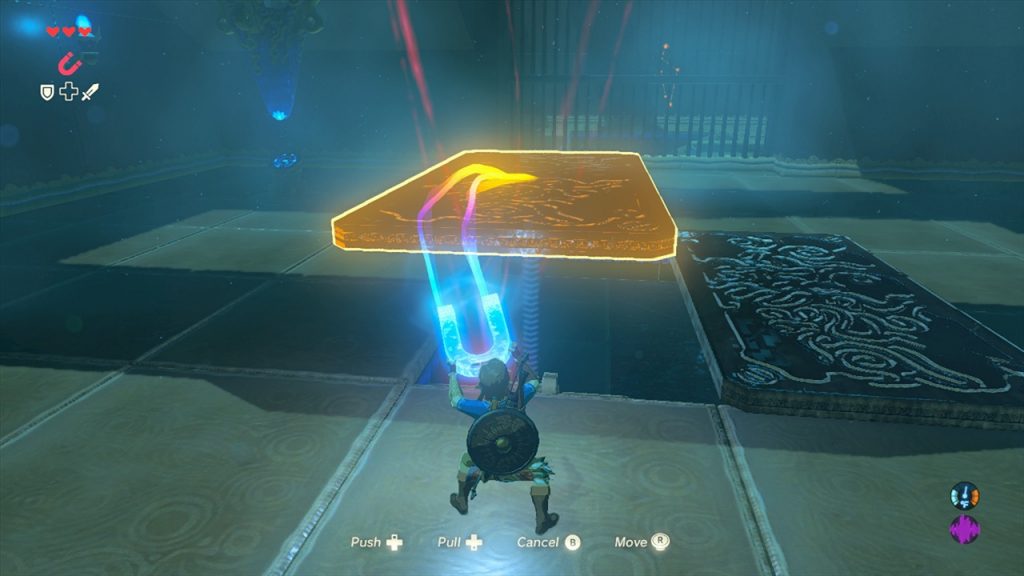 Speaking of not even scratching the surface, representatives from Nintendo claimed that Breath of the Wild‘s map was roughly twelve times the size of The Legend of Zelda: Twilight Princess and that the area demo was contained within represented less than two percent of the overall map.  That is a massive world to explore, and explorable in ways unimaginable with previous Zelda entries.  As mentioned, in Breath of the Wild Link can sprint, jump, and climb just about any surface.  Similar to The Legend of Zelda: Skyward Sword, the game features a stamina system and actions like running or climbing gradually reduce Link’s stamina.  A tap of the X button lets Link leap upward, or boost while swimming, but reduces stamina far more rapidly.  This system allows Link to explore a the width of the wild as well as the significant heights, as this is the most vertically-oriented map a Zelda game has ever featured.

Exploration is not just enjoyable for its own benefit, but is necessary for survival.  Not only can Link discover weapons and tools out in the wild, but ingredients for recipes necessary for restoring Link’s health are littered throughout the world.  Players will no longer find hearts in jars and grass to restore the heart meter, but instead must consume food.  Some foods, like mushrooms and apples, are consumable immediately to recuperate quickly, however, crafting a fire and a heartier meal reaps a heartier reward.  Some food even has the added benefit of adding impermanent hearts denoted by their yellow coloration.  The system is simple to use and has the added benefit of allowing Link to heal on the fly with the ingredients already in his inventory.

It’s emphatically clear that this is a brand new Legend of Zelda title.  Brilliant new mechanics, exploration reminiscent of the first Zelda game, a more serious tone from the outset of the game, a seemingly more open-ended mode of story telling, and a rich, vibrant, living world brought to life in a gorgeous, new art style comparable to a Miyazaki film made the demo to The Legend of Zelda: Breath of the Wild a captivating, unadulterated fun experience that, hands-down, was the best game shown at E3.  Thus far shying away from a themed gimmick like a protagonist who can transform in to a wolf, or a land flooded with water, Breath of the Wild instead differentiates itself through its phenomenal, unique gameplay and the sheer depth of the world itself.  It was an experience unrestricted by motion controls, or the Wii U’s gamepad, the second screen of which was inactive during the demo, leading me to believe that Breath of the Wild will stand exclusively on the quality of its gameplay alone on both the Wii U and the impending NX.  Most importantly, that gameplay was remarkably fun, polished to point of perfection as Nintendo games frequently are, and the best experience I had at all of E3.  All of this, assisted by Nintendo’s decision to go all out on demoing this game solely and the sensational decoration of the demo area, made for an unforgettable experience.  So, go ahead, start holding your breath, The Legend of Zelda: Breath of the Wild is set to be a wild time and potentially the best and undoubtedly the most distinguishable Zelda game to come out in just under twenty years.