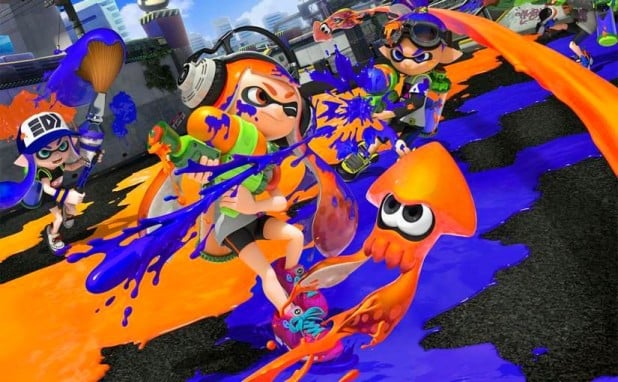 I’ve stayed up later than I should’ve way too many nights due to Nintendo’s new inky splatterfest of an online shooter, Splatoon, making a glorious colorful mess and inducing the gurgling death throes of my cephalopod enemies. Credit extremely satisfying gameplay with short bursts of fast and furious matches that make it the king of “just one more game and I’ll turn it off” false promises, and one of the freshest, most enjoyable, and addicting games on the Wii U.

Bucking the conventional wisdom that cleanliness is next to godliness, the basic concept of Splatoon revolves around firing (or rolling) various weapons, often at other players, and swimming through your own ink like a squid to travel faster and shoot even more ink at stuff. That the main goal in this “shooter” isn’t to kill but instead to spread color is just the sort of revolution in gameplay that is right up Nintendo’s alley, and injects creativity into a genre that had been sorely lacking it for quite some time. This simple concept feels unique but also blatantly obvious; why did it take so long for something like Splatoon to happen?

Part of the brilliance of Splatoon also lies in its simple accessibility; intuitive controls mean anyone can pick up a splat roller or one of the many Super Soaker-style weapons and start contributing almost immediately. Again, this is Nintendo at its inclusive best, but don’t let that fool you into thinking the many modes and challenges are easy. Technique reigns supreme out on the battlefield, but at least rookies aren’t merely cannon fodder. Sure, some may complain about the lack of voice chat, but what does it say about the brilliance of Nintendo’s design that communication is rarely a problem?

In the end, Splatoon is destined to one day be looked upon as the hallowed beginning of a (non) killer franchise, and is an experience that for many will define the Wii U generation.