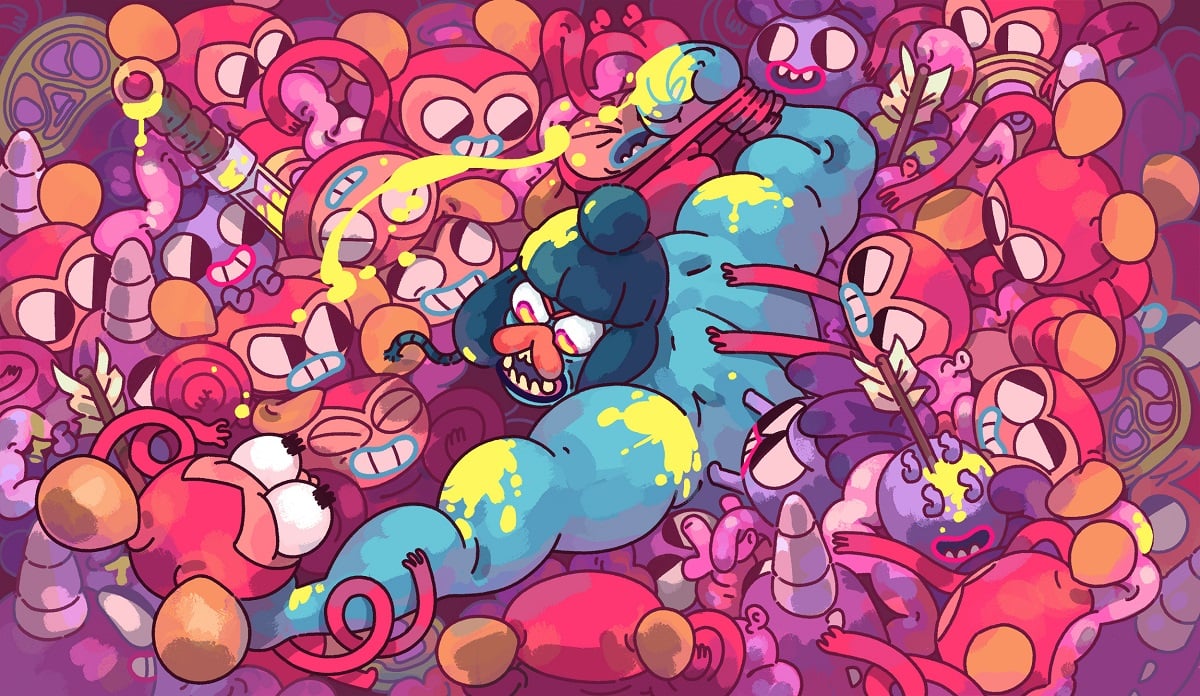 For as intensely as the AAA games industry focuses on immersion, it’s easy to forget that a great podcast game can be equally as valuable. Mobile games are often designed around this very concept, and from the first moments of playing Grindstone on Switch, it’s obvious that it’s no different here. Far from this being a negative, however, Grindstone’s pick-up-and-play nature makes it one of the most perfectly suited Switch ports in a long time.

As a professional stonegrinder, players must venture into a series of caves and make a living by fighting hordes of monsters–humorously named Creeps–to collect gems, guts, and other resources. Capy Games has structured these skirmishes similarly to the classic match-three puzzle format, but with a twist. Instead of building chains of three or four to rack up combos, the stonegrinder is on the board and can only move around by attacking Creeps of the same type in a premeditated path of destruction.

This core concept is at the heart of what makes playing Grindstone such an addicting yet mindless (in a good way!) experience. Enemies are color-coded so matching them is simple enough, but then there are extra wrinkles like extra-powerful Creeps (affectionately called Jerks), crates and boulders to destroy for materials, and increasingly hostile Creeps that grow angry and attack you the longer you play a stage. There’s a great balance of accessible, passive play and engaging elements to interact with, and more variables are introduced consistently.

Grindstone offers a plethora of goals and types of progression to keep players invested. Instead of the typical three star system to signify 100-percenting a stage, golden medallions are awarded for completing certain feats. These range from killing a set number of Creeps to unlocking treasure chests in each stage, and going the extra mile to obtain these medals always feels worth the added challenge.

Everything gathered during a run feeds back into upgrades and enhancements accessible in the town. There’s an armory that lets you equip different ability-granting outfits, a weapons shop where you can build helpful gear, a library where you can read some cleverly written lore on every character in the game, and a handful of other handy shops to frequent. The more gems, guts, wood, and so on you collect, the more you can craft and concoct before heading into your next battle. There’s strong enough customization here that the right build can mean the difference between a flawless run and death, and it’s quite rewarding to find the perfect combination of items and weapons before re-challenging a tough stage.

What’s astounding is that Grindstone’s production values are right on par with everything else. Creep sprites are full of life and charm, stages are impressively themed and distinct, and all the townies are wonderfully realized in a style somewhat akin to Disney’s Gravity Falls. The music accompanying every stage is also shockingly catchy, so much that it almost feels wrong to turn it down while multitasking. It’s just incredibly tight all around, with the sole performance-related issue being load times that feel slightly longer than they should be.

Grindstone is immediately one of the best puzzle games available on the Switch, and it suits the platform perfectly. With both button and touch controls supported, a surprisingly lengthy main campaign, and daily leaderboard challenges to chase, this is a strong package with high levels of replayability. Grindstone’s transition from mobile to console has been a smooth one, and it continues to be one of the best podcast games in recent memory.