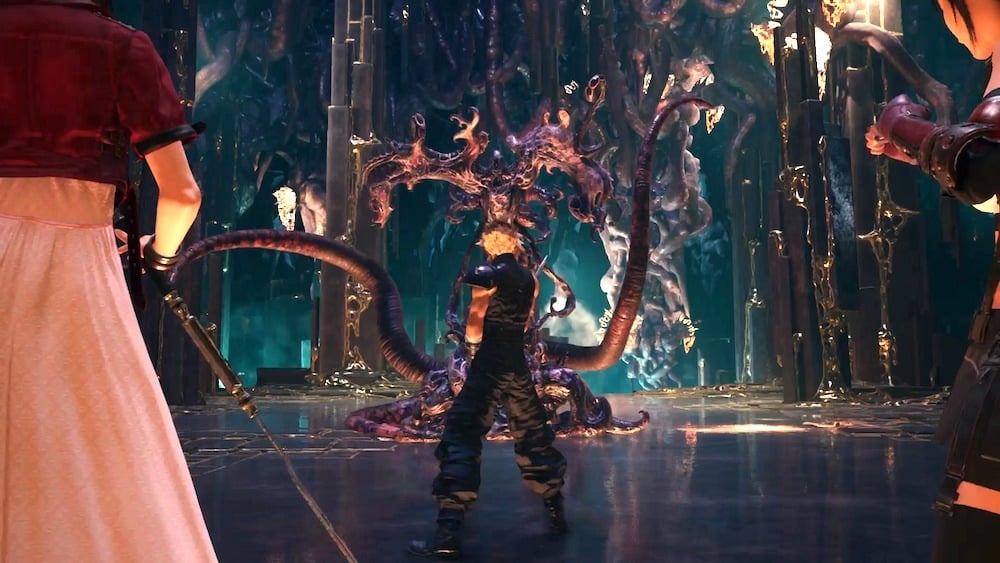 When Final Fantasy VII Remake was announced in 2015, fans were understandably floored. The long pine for a remake would bring one of the undisputed greatest games of all time to a whole new audience. It would also allow longtime fans to enjoy the adventure all over again with modern sensibilities and the bells and whistles of current generation technology. The only question was: would the remake live up to the original?

Lucky for us all, Square-Enix’s remake of their most iconic title exceeded players expectations in nearly every way. Surprisingly, though, Final Fantasy VII Remake also had the gall to deviate from its source material to a shocking degree. Including new characters, new quests, and new boss battles for the section of the game that it covers, FFVIIR packed a lot of tasty new additions into its 30-70 hour runtime.

Though the “whispers”, strange phantom-like creatures, hinted that this would be the case early on, it wasn’t until players were faced down with the calamity from the skies, Jenova, that they truly new things were going to be different this time around. Since you didn’t have a fight with Jenova in the game until much later in the original Final Fantasy VII, the fact that players found themselves not only fighting the extraterrestrial terror at all, let alone an all-new version of her, was a happy surprise for fans.

With the hugely iconic “J-E-N-O-V-A” theme pulsing in the background, Final Fantasy VII Remake gave players a crash course in nostalgia even as it gave them something entirely new. The highly infectious modern take on the tune is a three-course meal of a boss theme, altering and rearranging the track before offering a final version of the original worthy of all-time great composer, Nobuo Uematsu, himself.

It isn’t just the music, however, it’s also the moment itself. As if seeing Jenova again after all these years isn’t enough, battling an all bets are off version of her with Final Fantasy VII Remake‘s dynamic new battle system made this fight feel like a new beast altogether. As mentioned above, the battle contains three separate stages that change up Jenova’s attacks and the strategy to tackle her, each with their own resonant theme, letting your ears, (as well as your eyes) appreciate the fight in tandem.

Still more impressive, Final Fantasy VII Remake renews the horror-lite look and feel of Jenova from the original FFVII into a cool new skull design that makes its own mark while feeling totally in line with its 90s progenitor. It’s just another example of how FFVIIR nails the balance between paying tribute to the original and blazing its own trail in the process.

Not just an adept and original take on an iconic foe but also a harbinger of things to come, Jenova Dreamweaver’s appearance in Final Fantasy VII Remake was a jaw-dropper of a surprise and certainly one of the best gaming moments of 2020.