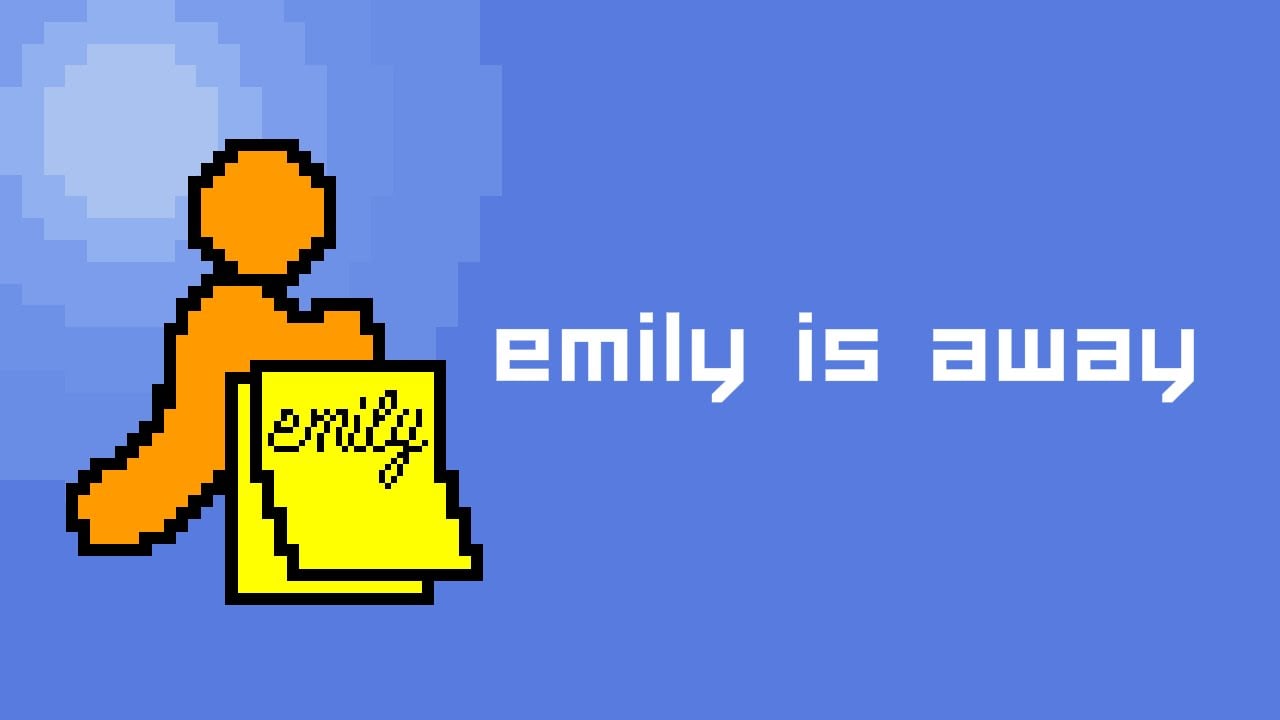 *Warning: This article contains some light SPOILERS for Emily is Away.*

With so many games being released in a year, it’s hard enough to keep up with the steady stream of massive AAA games that hit the market, let alone the indie games that don’t receive the same publicity. Some of them are just too good to let slide by, and Emily is Away is one of those games.

It hearkens back to a day when choosing a screenname and profile picture for your instant messenger used to be the ultimate test of your “coolness”. Now, these messaging tools are just parts of the massive social networks that we love, with our Facebook profiles giving away much more than we ever did before.

But what if we could relive those simpler days? Journey back to the first moments when our keystrokes meant as much as our spoken word? That’s exactly what Kyle Seeley chose to explore in developing Emily is Away. And, boy, did he succeed.

A Journey Back In Time

Emily is Away (released on November 20, 2015) is a short visual novel based in that world of instant messaging, which conquered the lives of every young adult from the mid ‘90s through the early 2000’s. The player follows the storyline of Emily and the player’s character from their senior year of high school through their senior year of college. The player’s relationship with Emily is strong, but enough to withstand the distance between them?

But how could this be something special? There are no dazzling graphics to hide behind, no huge cast of characters to provide with a plethora of backstories. The sound effects are recognizable from any old-school Windows PC, but that’s about as flashy as the game gets.

While this sounds straightforward enough, Seeley found ingenious ways to inject emotion into the keystrokes that allow the game to transcend the seemingly simple format of the gameplay.

The player chance for players to put their own personality into the experience comes before every chapter in the game begins, when they can set their IM profile picture for the year. Perusing through images of the covers of albums from Blink-182 and Green Day gave me an instant sense of nostalgia for those years before Emily even came online.

Checking out your buddy list makes the immersion grow even deeper. All of your online friends have their profiles set to reflect the teenage angst that gripped everyone like a disease. Random quotes and song lyrics litter their screens, along with their plans for the weekend or allusions to their feelings at the time. The characters on your buddy list have these remarkably complete personalities, without having a single interaction. Although they are never there for you to actually interact with through the course of the game, they provide an intriguing counterpoint to the player’s deep, personal connection and conversations with Emily.

From looking at their profiles, I was able to get peeks into the lives of my “buddies”, painting a picture of what my relationship with them would be if I were to interact with them. But even in the closest of friend groups, there’s that one person that you just understand on a different level. My buddy list was my friend group, and it was obvious that Emily was that special standout. Emily’s profile in that year gives a small peek into her overall character.

Your customization continues once Emily begins to converse with you. The color of your text as well as your background can be changed into a selection of neon colors that might be viewed as a bit, well, ugly now, but were so pervasive at the time.

Becoming More Than A Game

The most surprising aspect of the game comes once the player begins to get to know Emily and establishing a relationship. After choosing and typing my chosen response to my far-away friend, I was unable to send what I wanted to say. My character began to delete and edit the response, avoiding what they actually wanted to say out of fear of the subsequent changes that could occur in the friendship with Emily.

What if Emily was offended by being asked a question about her relationship? What if she didn’t share my same feelings that we should have a relationship beyond a friendship? This was too much to risk when so many changes were already occurring in our lives, and it wasn’t worth risking losing her for good. The player choice evokes an emotional response that transcends the gameplay.

It was in these moments that the brilliance of Emily is Away truly shows. The conversations that I had with Emily made me think more deeply about a game than I have in quite a while. Deciding on what response to say was agonizing at times. What she said mattered. The responses mattered, not just because Seeley programmed multiple endings into the game. I wanted to be her friend, and any failure in doing that hurt in the same way that it would when a real-life friendship would begin to break down.

During one of our conversations, I began to contemplate why this game wasn’t talked about more in LGBT circles, in a similar realm as the story of Gone Home. In that moment, I realized that the only reason why I was asking that question was because both Emily and I are female, and I was so personally entrenched in my story with her that I completely stopped thinking of the greater context of how the game could be played by anyone, was meant for everyone.

At some point in the playthrough, Emily is Away becomes your game rather than just a game. It rises to another level above what anyone would expect, creating an experience that is equal to none. Sure, some may claim it isn’t really much of a game, and I wouldn’t argue that. Emily is Away is more. The hour that I spent with Emily and the final moments of my time in that world have stuck with me, and I have no doubt that they will for quite a while. If you missed this experience, create your screenname right away. You won’t regret it.

Emily is Away is available on Steam and itch.io.