Zombie fatigue is a real thing. After countless movies, TV shows and video games, it’s apparent that the traditional way of handling zombies in media isn’t connecting the way it used to five years ago. Enter Death Road to Canada, a rogue-like road trip simulator that eschews the typical grim portrayal of the zombie apocalypse in favor of something lighthearted and gloriously campy. Despite its incredible replayability and short play sessions being an ideal fit for the Switch, however, Rocketcat Games might not have gone all out with this particular port.

It’s All About the Journey

Death Road to Canada starts with the same premise every run: The main character has heard that Canada is one of the last remaining places safe from the threat of zombies. Banking on this rumor, he/she decides to risk the 15-day trek from Florida in hopes of finding safety.

From that point on, the story is in the hands of the player. One of the defining traits of Death Road to Canada is its randomized nature that make every playthrough unique. Though every run is contained within the same overarching framework (players will always stop first thing for supplies and will always have the chance to boost their abilities after surviving a siege), every event, location and recruitable companion is left entirely to chance. Rogue-likes are known for this, of course, but the inherently adventurous spirit that comes with taking a road trip really makes each run feel more like a unique journey than something like GoNNER or The Binding of Isaac.

Aside from varying events and locations, there’s also a good amount of diversity when it comes to character perks and traits. Every survivor the player recruits will have one of each, and they can both affect a run in wildly different ways. To give you an idea, perks like Car Nut grant the character with an extra point in mechanical ability, whereas the perk Friend of Dog grants the ability to recruit dog companions for the ride. Traits, on the other hand, can be either good or bad (a personal favorite is Frantic Whiner, which increases run speed but makes the character more fragile).

In a brilliant decision that lends Death Road to Canada that much more replayability, players can create up to 80 of their own characters via a fairly robust character creator and fully customize them with whatever perk and trait combinations they want. This opens the door for players to create in-game storylines with their friends, family, celebrities, and whoever else, and it’s absolutely glorious.

Of course, a good rogue-like is nothing without some reward or sense of progression to keep players coming back for more. Enter Zombo Points, an in-game currency that’s only earned once players have passed certain milestones in every run. These can be used to upgrade perks or traits and unlock special ones that make the game a bit easier (i.e. Phoenix, a trait that automatically resurrects a character to full health upon death once per game). This is a godsend since Death Road to Canada sports a pretty brutal average difficulty. As long as players can just make it past the first milestone every run, they have the chance to steadily earn upgrades to help them get farther.

The actual combat in Death Road to Canada is fairly simple hack-and-slash (or shoot) gameplay. Once out of the car, players run around small segments of environments ranging from cities to junk yards populated with slow-moving zombies. All weapons can either be bought during stops at trading camps or–more likely–scavenged from buildings.

There are a ton of weapons that play differently depending on their type, weight and how skilled the character wielding them is. Meat cleavers, shotguns, spatulas, knitting needles, pieces of wood, purses; they’re all fair game here. The stronger a character is, the bigger things he/she can throw; the heavier a weapon is (i.e. a pipe or crowbar) the more damage it does. Gathering the right combination of weapons is essential to surviving a zombie horde, and the wide variety of options makes it that much more fun.

A Rough Road Lies Ahead in ‘Death Road to Canada’

Every run in Death Road to Canada succeeds in feeling like a real road trip, for better and for worse. Players need to be aware of food, gas and (since it’s the zombie apocalypse) medical supplies. This resource management element of the game manages to walk the line between stressful and fun surprisingly well. Limited resources force players to take a hard look at their party size, since more members means less food to go around. However, a smaller party also means less backup during scavenging sessions and sieges. Weighing the pros and cons of factors like these and overcoming the odds is part of what makes beating Death Road to Canada so supremely rewarding.

Randomization and forced judgement calls have their downsides, however. Sometimes it felt as though I needed just as much skill as luck to have a successful run. In one instance I had a strong stash of food and gas, but suddenly my car broke down and my team got ambushed by hostile bandits. On another run I was thrown into a near-impossible siege relatively early on that I wasn’t nearly experienced enough to handle.

Part of the game is knowing which option to go with in a situation and which team members are right for the job, but another part of it is just dealing with random chance. Though I eventually got used to this and accepted it as part of the experience, I can definitely imagine less patient gamers getting frustrated that all of their hard work suddenly got dashed due to circumstances outside of their control. This is especially damning due to the considerable length of a run in Death Road to Canada compared to other rogue-likes. You know how it’s almost a meme at this point to say that a game is “perfect for the Switch?” Well, Death Road to Canada honest-to-goodness is. Its design is ideal for the Switch’s pick up and play nature, and it lends itself well to shorter play sessions. The idea of taking Death Road on a road trip is seriously grin-inducing.

However,  it seems as though developer Rocketcat Games wasn’t able to go all-in with the Switch port. On the bright side, the game does support 2-player local co-op that makes use of the Joy Con. On the other hand, though, there’s no HD rumble to speak of, a surprising omission seeing as the game has so many screen effects and weapons just begging to be translated into rumble. Even more mind-boggling, though, is the lack of touch in handheld mode. All of the game’s menu screens (of which there are many) lend themselves so well to touchscreen interaction.

Character customization, inventory management, event scenes; working through all of these would’ve been considerably more intuitive with the addition of touch. The game might also need further optimization, as I encountered noticeable lag during gameplay and in menus after starting it up from the Switch’s sleep mode. 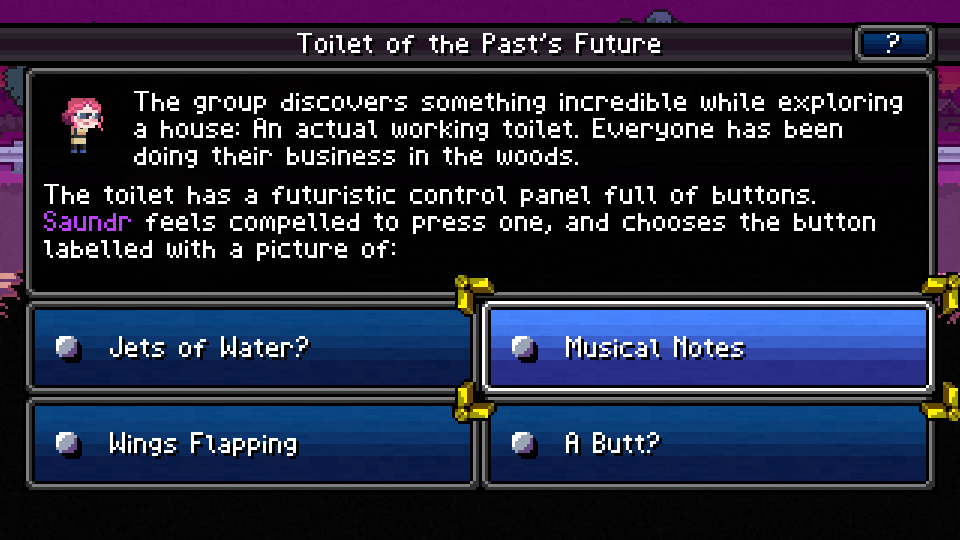 Something Fresh in a Stale Genre

Death Road to Canada is an addictive and fresh take on the undeniably stale zombie genre. As someone who isn’t particularly interested in gratuitous amounts of gore, it was nice to be able to play something with a charming presentation that still managed to convey the tenseness of the zombie apocalypse. The game’s sharp writing and ridiculous events filled with personality inspire multiple runs just out of want to experiment with the different outcomes.

And yet despite how much fun Death Road to Canada is and how much replay value it offers, it’s not without its flaws. It can be infuriating at times, especially if you’ve invested a good hour into a run only to have it stopped by a random series of bad events. Players looking for an easy, laidback experience definitely won’t find it here. As a Switch game, it also fails to utilize a couple key features that would’ve truly enhanced the player experience. Nevertheless, the ability to take Death Road with you on the road really is a fantastic prospect.