A card battler for the rest of us.

Plants vs. Zombies has had a healthy presence in the gaming industry ever since it broke out with the original entry in 2009. An innovative take on the tower defense genre, the game quickly became a flagship mobile title and established a franchise that has seen success both in mainline entries and spin-offs across mobile, PC and even console markets.

The latest of these spin-offs is Plants vs. Zombies Heroes, a strategic card battling game directly in the vein of the Blizzard mega-hit Hearthstone. This alone could’ve caused Heroes to be written off as a clone, but the polish, accessibility and deep deck building mechanics this game brings to the table shine through brilliantly.

For those who’ve never played a card battling game, the general concept is pretty simple. In this case, each player begins with four cards that can be randomly exchanged at the beginning of the game. The player starts out with one sun or one brain depending on your faction (both are simply forms of energy) and you get an additional sun/brain each turn. These allow you to play cards, with each card having a specific cost. Naturally, as the game goes on, players will be able to play more powerful cards. There are both creature cards and trick cards, similar to Hearthstone. When and how you play them depends on your deck building strategy and how you’re able to manipulate card costs and energy to your advantage. This amounts to a game that is as much about strategy as it is luck of the draw. 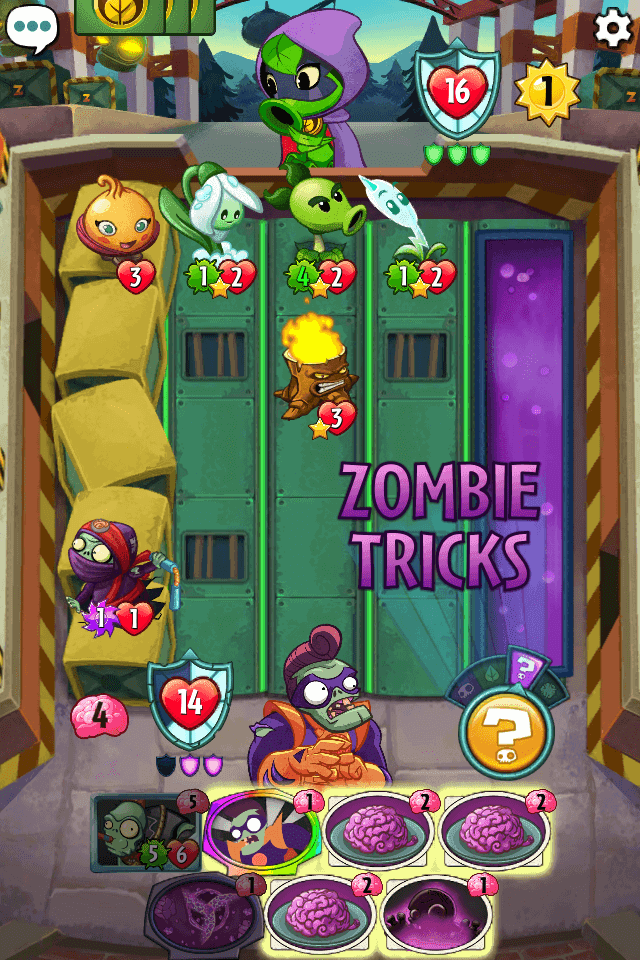 What really sets Heroes apart from Hearthstone is the whimsical presentation and colorful cast of characters. A stark contrast to the high fantasy World of Warcraft on which Hearthstone is based, Heroes takes place in an action-packed comic book world where each hero (and villain) has their own super-light, silly storyline. The Plants vs. Zombies series has never taken itself too seriously, and Heroes is no different.  What’s more, each hero has a distinct personality–Rose, for instance, is a pompous plant sorceress who always chuckles at her zombie foes, whereas The Smash is a Hulk-like wrestler who’s seemingly controlled by a tiny zombie scientist that rides atop his shoulders. Amongst all other card battling games, it’s tough to outshine Heroes‘ production values.

These characters stick out in Heroes not only for their intricate designs, but also because of how well their personalities lend themselves to a card battler. There’s enough diversity in the roster to appeal to a variety of play types, and each “hero” is clearly classified by its traits so new players can make informed decisions when deciding on a roster. Spudow, for instance, belongs to the Guardian class and has special abilities that lend themselves to protection, whereas Professor Brainstorm is part of the Brainy ensemble and thrives off of trickery. With 10 classes spread across 20 unique heroes (10 plants and 10 zombies), everyone is bound to find their favorites. The newly-implemented weekly events, however, discourage focusing solely on one hero or type of play.

Every week there’s a goal–either 1,500 or 2,000 tickets–you need to hit to attain a timed-exclusive Event Card. The developers always make sure that these cards are valuable enough to strive for, which is great motivation in and of itself. Every time you win a game normally you get 15 tickets as a reward, but some heroes get x5 and x10 boosts depending on the week, encouraging players to try lesser-used decks. This simple incentive is vital for two reasons: it keeps the gameplay fresh, and it gives players a reason to keep coming back on a weekly basis. This massive boost in replayability is key to the game’s longevity and a very welcome addition.

Now it’s time to address the massive elephant in the room–yes, Heroes is free-to-play with in-app purchases. However, these are completely optional and do little to ruin the integrity of the game. As a player progresses through the story mode and plays online matches they unlock tokens that are used to purchase common cards. Once a player has collected all of the common cards, there are gems that cost real world money that can be spent on packs of premium cards. Alternatively, though, there are three simple gem challenges (i.e. “Win a Multiplayer Battle” or “Play 5 Plants that Cost Less than 3 Suns”) that each refresh every four hours after they’re completed and offer 10-gem/20-gem rewards. These can be redeemed endlessly, and are a legitimately free way of earning gems to buy premium packs. Sure, it takes awhile to save up, but it also severely lessens the pay-to-win issue that plagues many other free-to-play games.

Plants vs. Zombies Heroes was clearly built around Hearthstone’s framework, and yet it goes on to build upon and excel beyond that rock solid foundation. The heroes themselves offer dynamic gameplay advantages and are full of personality, and the deck building and card battling mechanics are deep and genuinely fun to experiment with. For those looking to get their feet wet in the card battle genre or for those who’re looking for a Hearthstone alternative, I couldn’t recommend this title highly enough.