THQ’s Darksiders mingles God of War‘s quick-fire hack and slash with The Legend of Zelda‘s dungeon discovery, and its sequel, Darksiders II, contributes a fantastical world and role playing mechanics, like loot and side-quests, to the mix. Both received stellar fan and critic reception.

After THQ filed for bankruptcy, they were acquired by Nordic Games, which resulted in their properties being in new hands. Fans feared Darksiders III wouldn’t manifest, but fortunately — with the developmental aid of Gunfire Games, an independent studio comprised primarily of Darksiders and Darksiders II developers — Nordic Games (now THQ Nordic) have released Darksiders III. So, is it worth the six-year wait? 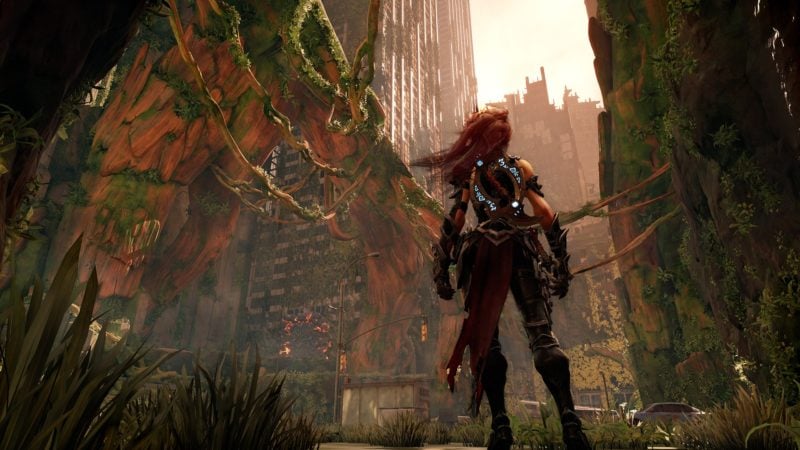 Darksiders III continues the pattern of its predecessors, putting a new protagonist front and center. Highlighting Fury as the third of the Four Horsemen of the Apocalypse, her story unfurls in the same timeline as War’s and Death’s adventures. Tasked by the Charred Council with eradicating manifestations of the Seven Deadly Sins, she takes to a post-apocalyptic Earth to hunt them. Yup, the baddies are the Seven Deadly Sins, because who needs originality?

Whilst aptly building on the lore of its universe, Darksiders III flaunts the same schlocky storytelling that resulted in its predecessors’ amounting to little more than paint-by-numbers fantasy. Fury undergoes growth throughout, morphing from an arrogant ball of anger to a compassionately rational individual; it’s like Kratos’s character development in 2018’s God of War, but boring. The war between Heaven and Hell, the Four Horsemen’s role in it, humanity’s place in the apocalypse, and the mysterious Charred Council overseeing all — Darksiders III‘s story is probably only riveting to those that appreciate 2016’s critically panned Warcraft film.

Darksiders III‘s story strengths are the tidbits divulging the relationships between the Four Horsemen, such as a passing comment where Fury exclaims “It smells like death in here. Trust me. We shared a room a thousand years ago.” It’s saying something when the best bit of characterisation is a throwaway remark about another characters’ stench. 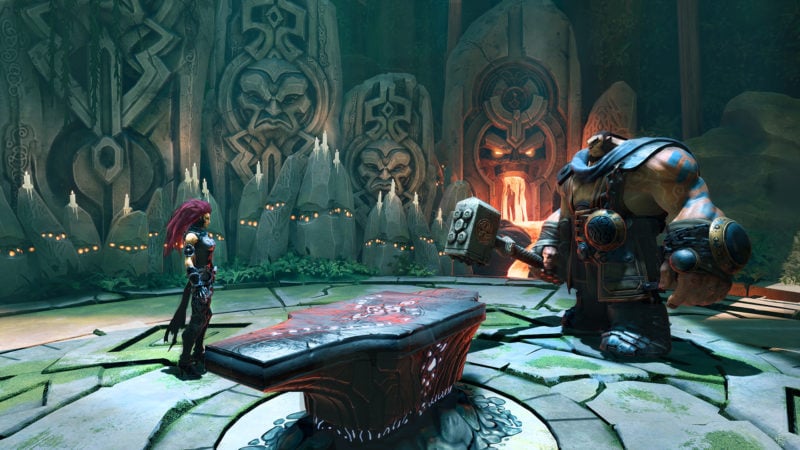 Combat in Darksiders III is initially underwhelming. Monotony and one-button combos kick off Fury’s quest rather clunkily, but upon persevering, new abilities and weapons become available. The linear world eventually branches off, encouraging exploration (although a map is sorely missed), and bolstering Fury’s prowess through frequent upgrading is enjoyable.

Despite this, Darksiders III leans into cheap tactics. Dodging is sluggish, and with no invulnerability windows, enemies can knock Fury into a damage loop with no opportunity to dodge, heal, or retaliate. This is worsened by an unhelpful camera.

Inspired by the Soulsborne boom of modern combat, Darksiders III requires players to read the nuances of enemies, but with temperamental attack broadcasting and the aforementioned dodging and camera problems, it’s unsatisfyingly unfair rather than pleasantly challenging. A block command would’ve been useful, especially considering the wealth of enemies that boast blocking capabilities themselves.

At least the bosses are a high point. Fighting just one opponent grants a slicker experience, with Gluttony and the final boss being memorable highlights. They are Darksiders III‘s combat at its best: frantic, tough, and (mostly) fair. 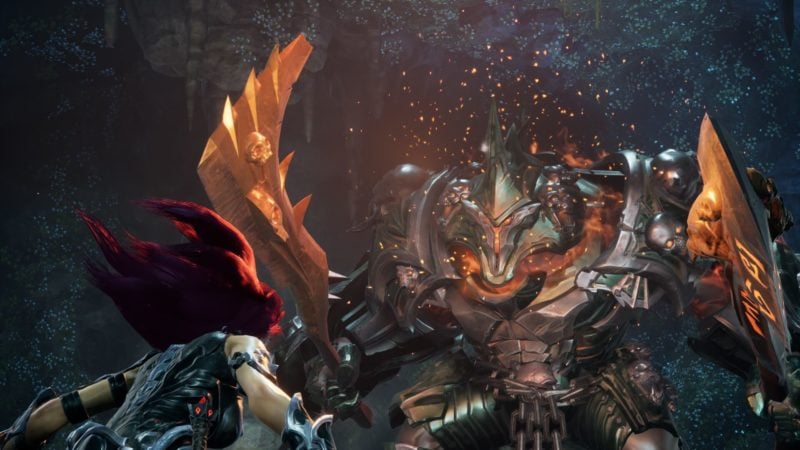 Darksiders III does alter much of its predecessors’ formula, and not necessarily for the better. Gone are the imaginative dungeons, and don’t expect the sprawling locales of Darksiders II. Oh, and remember the trailer with Fury riding her horse through a desert? Well, there is no desert, and there’s no horse-riding either. False advertising at its finest! (That said, Darksiders III’s spaces are so enclosed that there wouldn’t be room to ride a horse anyway.)

Weapon upgrading takes a hit too. With each upgrade requiring hard-to-find adamantite materials, it’s easy to pump resources into one weapon — like Fury’s primary Barbs of Scorn — before realizing the catch: it’s now counter-productive to use other weapons, because their damage output is inferior to the upgraded one(s). An approach like Darksiders, where weapons upgrade as a result of their usage, would incentivise players to indulge in their entire arsenal rather than sticking to whatever’s strongest at the time. Also, it’s impossible to fully upgrade every weapon and talisman due to only finite resources being available (so enjoy that one, completionists). 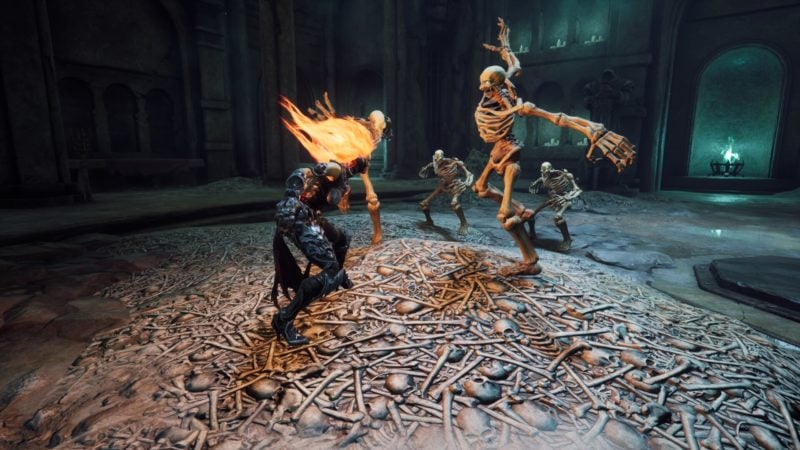 Finally, the kicker. Darksiders III, in short, is unfinished. Perhaps it needed to be rushed out for Christmas (after all, what better time to release a game than between Red Dead Redemption II and Super Smash Bros. Ultimate?). I completed the campaign in twenty hours, and during that I experienced audio cutouts, crashes, disappearing environments, frame rate drops, texture pop-in, and instances of endlessly floating in mid-air. This wasn’t once or twice; it was frequent, and many of these moments required me to quit and reload the game.

Even when Darksiders III chugs along decently, an overtone of bugginess plagues every inch of it. Nothing quite works as it should, as if held together with elastic bands and pritt sticks; the game threatens to clatter apart any minute. Frequent loading times that freeze the action also elicit annoyance, but perhaps all of this is an intentional spark of artistic genius, and the developers want players to experience anger similar to Fury herself? If so, job well done, because Darksiders III‘s flaws are utterly rage-inducing.

Instead of building on the positives of its predecessors, Darksiders III gets too big for its boots, abandoning some of its standout conventions and trying to tackle the Soulsborne genre, only to fail. There is enjoyment to be had, but the constant glitches and problems poison said enjoyment. Darksiders III is like a Darksiders game from another reality. It still plays like Darksiders, but it’s void of the fun finesse fans have come to expect, and instead of establishing excitement for its sequel, it just makes you want to go back and play the old ones.