The Cing adventure titles for the Nintendo DS, Trace Memory and Hotel Dusk: Room 215, are very unique titles that are fondly remembered by many for their intricate storytelling and dialogue-heavy format. Gamers looking for a more gameplay-driven and less reading-reliant experience often shied away from these games, but they undoubtedly found their niche among a crowd of DS owners who love to experience a great story. Unfortunately, Cing filed for bankruptcy in 2010, and haven’t been heard from since. Luckily, fans of these unique DS games have reason to be excited once more; Chase: Cold Case Investigations – Distant Memories is a visual novel adventure from many former staff members from this now-defunct company, developing under the new team of Arc System Works.

Cold Case Investigations follows the exploits of a detective duo who have been placed into the reopening of a five-year-old case, coming to the realization that there is much more to the story than once thought. Fans of Cing’s strong storytelling will not be disappointed, and newcomers looking for a fun, but short story to keep them occupied will also likely find something to enjoy here. As a story, it succeeds; however, there are a handful of flaws, mainly in the ways of feeling like an incomplete portion rather than a full game, and a lack of characterization that make this title difficult to fully recommend. 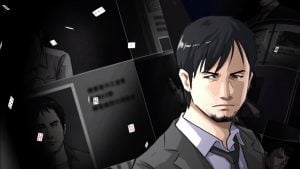 The plot of Cold Case is relatively simple in its premise, as well as its execution. It’s a great detective “whodunit”-type of story, through and through. You play as Shounosuke Nanase, a detective who works for the Cold Case Unit of the 3rd Tokyo Metropolitan Police Department. And…that’s just about all you ever learn about our hero, as well as his assistant, Koto Amekura. The player, as Nanase, follow their investigation of a five-year-old case that was thought to be closed, but hidden depths of the case soon begin to show, and it’s down the rabbit hole of investigating suspects and crime evidence from there. The story plays out like a more mature, abbreviated Ace Attorney case. Anyone who appreciates a good detective story will not be disappointed here, because the plot as a whole is very smartly-constructed. There are no shortage of suspicious suspects to be interrogated, data to be analyze, and revelations to be uncovered. The player will follow the two detectives as they converse with one another, as well as those involved with the case, trying to make sense of the entire scenario. It is best not to go into any more details of the plot of this game, considering the story is the main focus here, as well as the fact that the game only lasts about 2-3 hours. Though short, the plot does remain consistently entertaining throughout its run-time. The story is very satisfying until the very end, but a few threads are left untied by the end, and an obvious sequel hook at the conclusion tells us that there is more to come. For what is there, the story is easily enjoyable, but the short length still makes the ending feel sudden, and therefore a bit unsatisfactory. The game feels like a great chapter in what should be a much longer book. If the developers were going for an episodic format, why make the game $6? Because of this short length, it’s easy to feel a little bit cheated. The story is entertaining, but does not leave enough of an impression to be worth that much money for how little is actually there.

The plot does not waste any of the player’s time, and is quite fast-paced. So fast-paced, in fact, that the game ends up suffering for it. Not because the story is difficult to follow, but because there is a distinct lack of character depth within the game, and it’s fairly obvious that the developers put much more thought and time into writing the game’s overarching mystery than the actual characters themselves. This isn’t necessarily a problem, considering the game’s short length, but it still feels as if there could’ve been much more explained in terms of the characters and their motivations, instead of them being nothing more than machines that progress the plot forward. Detective Nanase, the lead character, has only one personality trait, which is apparently to antagonize his assistant, Amekura, as much as humanly possible. Seriously, this guy is relentlessly mean to her. And Amekura’s main personality trait is to become overly submissive and apologetic whenever Nanase criticizes her, which happens in just about every scene that they are together. It’s not worthy criticism, either- it’s just, “You did this wrong. You should’ve done this better. You’re an idiot.”-type of stuff. It’s not funny in the slightest, and the end result becomes a one-dimensional main character who is genuinely unlikable, and not even in a remotely enjoyable way. This is a shame, considering we spend so much time with him and his assistant. The supporting characters don’t have much to offer in this regard, either. Just a little bit of backstory, or attempt at any sort of characterization for the lead or supporting roles would’ve added a lot to the experience.

It should be noted that short stories that offer insight to character backstories are available on the game’s website, and it’s very much recommended that the player reads these if the game is purchased. They’re certainly not necessary, but add a lot more depth than what is presented in the game. It’s a shame that these stories weren’t included in the game, because most players will not be aware of their existence. So, that’s why I’m letting you know about these. Now you are among the few who are aware! Congratulations. 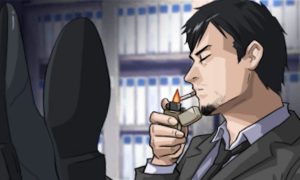 The gameplay, much like the story, is reminiscent of the Ace Attorney series. The majority of the game will be spent reading dialogue, and the only times that character interaction is involved are during instances of interrogation of suspects, where you need to choose the most valuable questions to ask each of them. If the player asks too many wrong questions, it’s game over. These sections are not very difficult, so long as the player has been paying attention to the story, and the interrogation sequences give the player a nice reward for doing so. Although, if one interrogation sequence does prove to be particularly difficult, have no fear, because the game allows the player to save at any point throughout the game. The interface feels very nice and polished, and the bottom menu allows for quick access to the text log, as well as the save/load screen.

The graphics of this game shine in some areas, but pale in others. The character designs and animations, for one, are quite fantastic. They are animated with a pseudo-3D look, and the slight movements of each character are done smoothly and feel genuinely lifelike. In a game that relies on only text and images to tell its story, the polished character models add a great amount to the overall experience. Unfortunately, this is just about the only noteworthy aspect of the game’s graphics, because there really isn’t much else to say about the rest of the game’s visuals. Much of the game takes place inside of a dark, dreary office, and there are very few instances where the player sees otherwise. There isn’t much color or particularly eye-catching imagery in this game, but what is there does a decent job. Unfortunately, there is no use of the 3DS’s 3D functionality in any way during the game.

The soundtrack of Cold Case Investigations offers a fun handful of tracks to solve mysteries to. Though only featuring a few songs, they are very enjoyable and give the game a lot of personality and atmosphere that it would otherwise lack. The pianos and muted trumpets really do put you in the shoes of a detective. I found myself enjoying the game’s music much more than I thought I would, and there is some great songwriting craft to be found here. However, it is highly reminiscent of a bygone era, an era of original Nintendo DS soundtracks. What I mean by this is that the soundtrack does sound particularly tinny and low-quality. This is something that is not really acceptable in 2016, and the 3DS’ speakers are capable of much greater sound than what is found within this game. Now I should denounce this, but I personally found myself really enjoying the low-quality audio, if not for nostalgia alone. The game’s sound really is low-quality enough to pass as an original DS soundtrack, and brings back warm memories of Trace Memory and Hotel Dusk. The musical quality itself is there, but the actual audio quality is quite bad, but still enjoyable for that original DS feel. It’s a somewhat unique scenario. 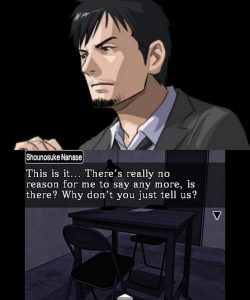 There is a strong feeling of lost potential that can be found throughout this game- the overall lack of polish and detail from within the game, as well as the sequel hook ending, give a sense of potential that was never fully reached. As a murder mystery, Chase: Cold Case Investigations – Distant Memories succeeds in its plotline with clever twists and a well-written scenarios, but the lack of polish, short length, and $6 price tag make it difficult to recommend to everyone. It’s a perfectly enjoyable adventure, but one that feels slightly empty in regards to personality and overall depth, with no replay value to be found. If an episodic format is what the developers were going for, a lower price would’ve been much appreciated. It is very obvious that the developers have a lot of talent when it comes to writing out a complex murder mystery, and really do care about bringing back that sweet DS-mystery flavor that they brought to the table with Cing in the mid-2000s. If you’re a fan of either Trace Memory or Hotel Dusk: Room 215, or enjoy a good mystery, this game is an easy recommendation. If you do decide to download it, be sure to check out those character short stories on the game’s website, they will add a lot to the experience. However, for the rest of the gaming population, its numerous flaws make it a title that one should look into before purchasing. In particular, more characterization and a longer play-time would’ve been appreciated. All in all, there is a lot to love about Cold Case Investigations, but there is a nagging sense of lost potential throughout the entire experience.