To Infinity and the Call beyond.

If by chance you live in some alternative universe or Utopian land where the graces of social media has been purged, world leaders have linked arms in peace and Call of Duty isn’t released on a yearly basis by such strict routine that it has almost become day labour – well done, you’ve been lucky. To the rest of us, here’s another Call of Duty; following naming conventions like a utilitarian state would name its cereal products, it’s Call of Duty: Infinite Warfare. Not to be confused with the Modern Warfare or the Advanced Warfare or the Console Warfare or the Warfare surrounding Activision’s bonus payouts. This time it’s different though, not to sound like a PR mouthpiece but it’s actually true on this occasion. Sort of, yet not really. Let’s explain.

Every year now we hear about how CoD is evolving and every year we get a solid, yet familiar re-skin of the original Modern Warfare (the pipe dream that each studio seems to be chasing into the annals of futuristic history). Infinity Ward have taken a firm step to stop mulling about in the fringes of plausible science and make the swift hyper-jump to space, finally distinguishing themselves from last year’s embarrassing installment of pseudo intellectual nonsense. So space is the new chewing gum flavour this year, and it’s surprisingly refreshing. More so is the realisation that the campaign for Infinite Warfare presents – possibly for the first time in the series – a cast of well written and memorable characters, with numerous beats of emotive storytelling. 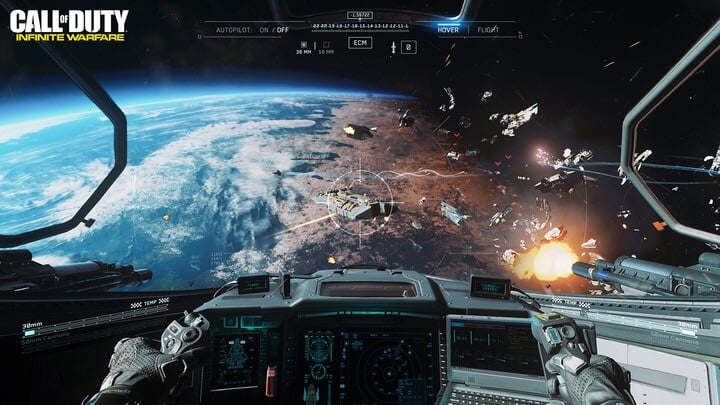 If only piloting spacecraft was so easy in real life, everyone would leave earth immediately.

It’s the most reigned in Call of Duty in years, it’s not a game about constant shouting, nonstop explosions and quick time paying of respects. There is a fair share of explosions by nature but there are also sections where you walk quietly around your ship and dedicated, lengthy cutscenes where characters talk. That’s right, talk. The result of this effort is a protagonist who has a face and a character arch, with a cast of well acted and likeable comrades. One of the standout characters is a robot called Ethan, who has been specifically programmed with charismatic traits, he ends up ironically feeling more human than any of Call of Duty’s previous attempts of molding blocks of meat into characters.

All of these strengths make it more bitterly disappointing that the overall narrative and its justification of events is so harrowingly thin. The game starts by throwing all the exposition behind the villains main motives at you; they’re evil and they hate that TV show you like. It also introduces us to the antagonist, Admiral Kotch, played by Kit Harrington of Game Of Thrones fame, who plays the villain in the same way he goes about playing a hero: not very well. His inexpressive and oftentimes monotonous reading of lines doesn’t lead credence to the character’s implied weighty threat. That aside, Admiral Kotch barely even shows up and when he does he mumbles about how bad he is with delusional grandeur, he’s so ineffectual that the last hour survives without him.

Events are set into motion after a full scale assault on earth that intriguingly mirrors the events of Peal Harbour; it’s an extremely strong start featuring eye catching visual imagery. The plot’s second act is a cleverly veiled succession of filler missions, the narrative reaches a red light and it doesn’t go green until the final act. One such mission asks you to propel an attack on the moon, and that summary is the entirety of the mission’s content. Momentum slows to a crawl during the middle portion, with returns to your ship after every mission and the option of side missions throwing pacing through a cheese grater. Things pick up towards the finale and the pacing clicks back into place, until you reach a rather abrupt ending, that despite being a fitting conclusion feels rushed, as if all the plot suddenly happens in one burst. The campaign is Infinite Warfare’s strongest mode, well made throughout, though lacking any one particular stand out set piece that other, more memorable Call of Duty games have had in the past.

The setting and themes may be new for the series, however what has mostly stayed true to the formula is the minute to minute action. The biggest departure consists of self contained dogfights in spacecrafts named Jackals, these are welcome injections of variety that bring comparisons to the Ace combat series. Space combat doesn’t constitute a large portion of the campaign (and is completely absent in multiplayer), they don’t differ much and lack depth but are used to show off some fantastic visual effects and gut wrenching set pieces.

Elsewhere things take a much more familiar turn, ground gunfights play out like they always have, extremely satisfying but with a distinct sense of déjà vu. Some new additions such as hacking enemy robots or anti-gravity grenades are thematically exciting but mechanically they boil down to pressing a different button to kill hostiles. One dubious design choice: making enemies soak up more bullets than usual is oddly deflating – you often find them getting up after unloading what might seem like enough lead to make them more hole ridden than a Michael Bay plot line. A nicer surprise is the soundtrack, being one of the only standout OSTs for the series, consisting of poignant melodies and soaring sc-fi tracks that have a tinge of Halo in them.

For vast portions of the community all these points are meaningless fodder, stepping in front of the life sucking (in multiple ways) multiplayer, a gaming mainstay that is equally loathed and lauded over, often by the same people. It would not be any sort of overstatement to say Infinite Warfare’s multiplayer is an utter mess of design ideas (on a personal note, I’ve never been so baffled by its complete lack of comprehension). If you live and breathe Call of Duty all year round and jump from one release to the next as if bailing from a flaming car that’s crashing towards a erupting volcano, then suffice to say you’ll dominate matches with ease, while everyone else runs in circles. At this point in the series’ life the multiplayer mode is impenetrable, filled with ceaseless buzzwords, jargon and whistling into mic teens. Its incessant bombardment of ideas lead to overly chaotic and frustrating matches until it all becomes desensitized white noise. Right now I hear the grand philosophy of ‘git gud’ gliding around the echo chambers of self appointed gaming mavericks the world over. 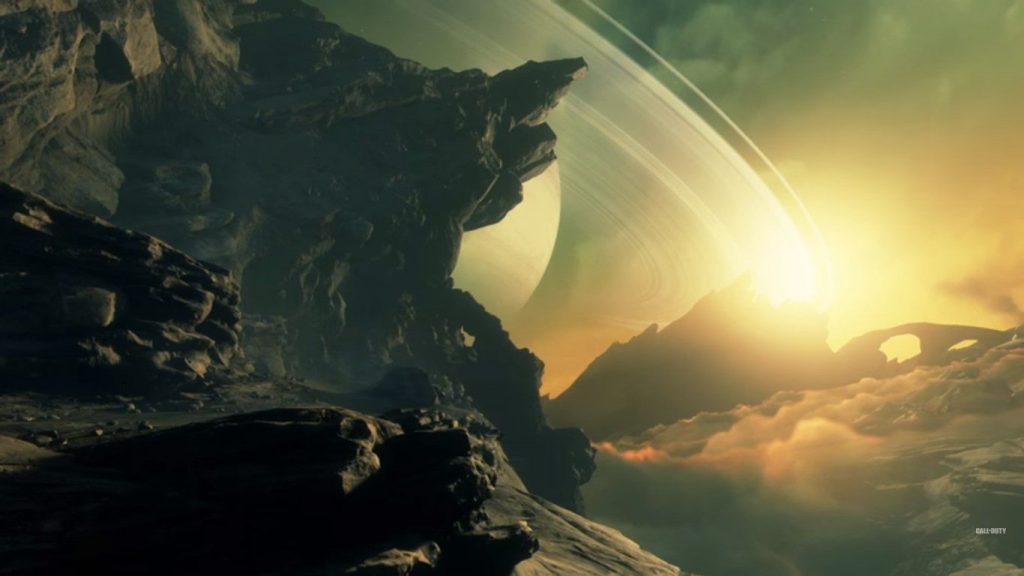 The problems are rooted deeper than just the accusation of being the ‘buzzkill old man’, who’s walked into the hip young party proclaiming ‘I brought a standby ambulance and a playlist of Oasis songs’. Matchmaking is abysmal, pairing you with players who are dozens of levels higher and know the systems inside and out. The writing is on the wall when half your team leave during a game simply because the other team is annihilating them, this isn’t a rare occurrence either. Consistently games are one sided with embarrassing scores such as 46-200. The maps are extremely cramped and hectic, you’ll be killed instantly out of nowhere from one of several flanking positions that litter every square inch of every map; respawn and an enemy will kill you effortlessly from behind as they slide through the kill cam – taunting your grip on the controller. Objective modes are plagued with players who simply camp up close to the objective in order to get hordes of easy kills as swarms of people rush to actually play the mode as intended, and the infuriating result is that they end up with a higher score. The multiplayer as it stands is a complete write off, while the campaign has seen interesting changes the online hasn’t and unless they decide to shake up how it works the mode will only become more incomprehensible to new or casual fans with each installment.

Infinity Ward caved in this year and felt begrudged to add an obligatory wave based zombie mode. Thankfully it’s equally as entertaining as Treyarch’s take, mainly because it feels like a carbon copy in every way but theme. This isn’t necessarily a bad thing but the whole offering has this eerie feeling of Deja vu about it (the second time this has been said about the game here); there are boarded up windows, you buy guns dotted around the map, each wave gets more challenging and teammates revive you when you are downed. It goes so far that even UI elements are nearly identical. Thematically it’s more interesting, setting its cast of characters into a 80’s theme park filled with intentionally cliché dialogue and tropes. Accompanying the campy action is a bright and colourful colour palette and a fitting licensed soundtrack featuring the likes of ‘The Final Countdown’ and ‘Tainted Love’.

In the end Call of Duty: Infinite Warfare is a mixed package, it has one of the most refreshing campaigns the series has seen in years, followed by a solid take on zombies, but marring this at the bottom of the goodie bag is this slimy mess of a multiplayer that pools between your fingers. It’s a hard game to recommend wholeheartedly, especially if you intend to get stuck into multiplayer. Let’s all look forward to Political Warfare, undoubtedly next year’s release, maybe then the online will consist of employing strategic planning, then again, maybe not.