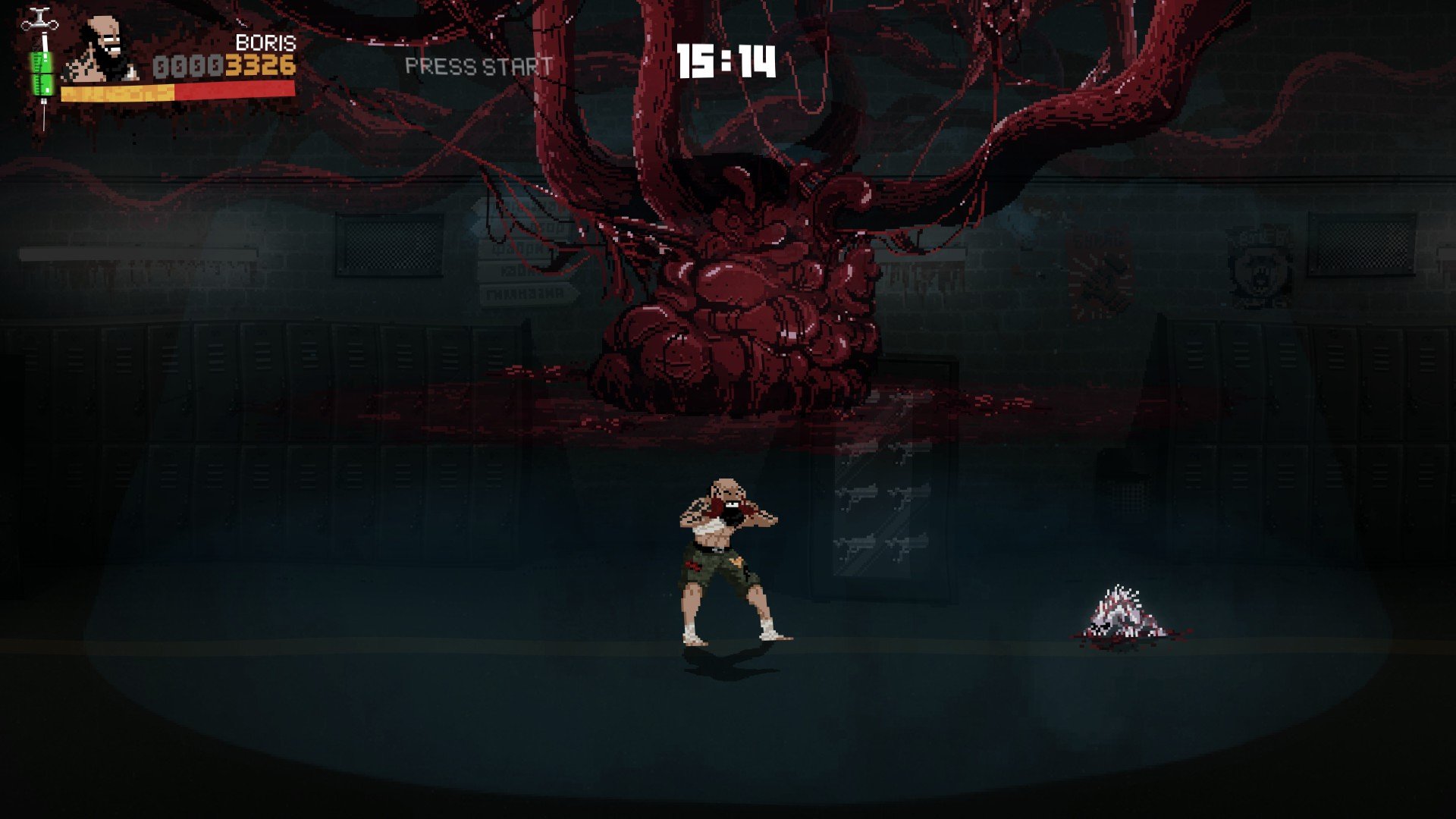 Despite its many accomplishments throughout mankind’s history, Russia is often thought of as a violent, vodka-soaked, Eastern European version of Mad Max, where people engage in hatchet fights over nothing, the roads are deathtraps that challenge all who dare, and the people are hardy and as prone to violence as they are to celebration. There are at least small elements of truth to some of those exaggerations, and its these elements that Mother Russia Bleeds wants to accentuate and explore in the only way it knows how: by being a 2D beat-em-up inspired by the old school. Is this one Russian revolution worth rooting for, or just a bucket of borscht?

The story takes place in 1986, starting in a Gypsy camp somewhere in rural Russia. You play as one of four fighters who make their living beating up local bums in fighting matches. After a bout, your camp is raided by secret police and you and your friends are knocked out, only to awaken a month later with nearly superhuman abilities and a thirst for vengeance. You’ll punch your way through hordes of enemies, join a revolution protest, and fight your way through shadowy organisations all in the name of figuring out who used you as a lab rat.

Like Devolver’s prior hit Hotline Miami, Mother Russia Bleeds lays on the psychedelic pretty hard. A side effect of the drug you’ve been injected with, called Nekro, is visions of a horrible beast that manifests at the worst time possible. As you progress these visions get worse and worse, occasionally manifesting themselves as ghost images, and it lends the game a great feeling of weird as you start to wonder how much of what you’re doing is real. 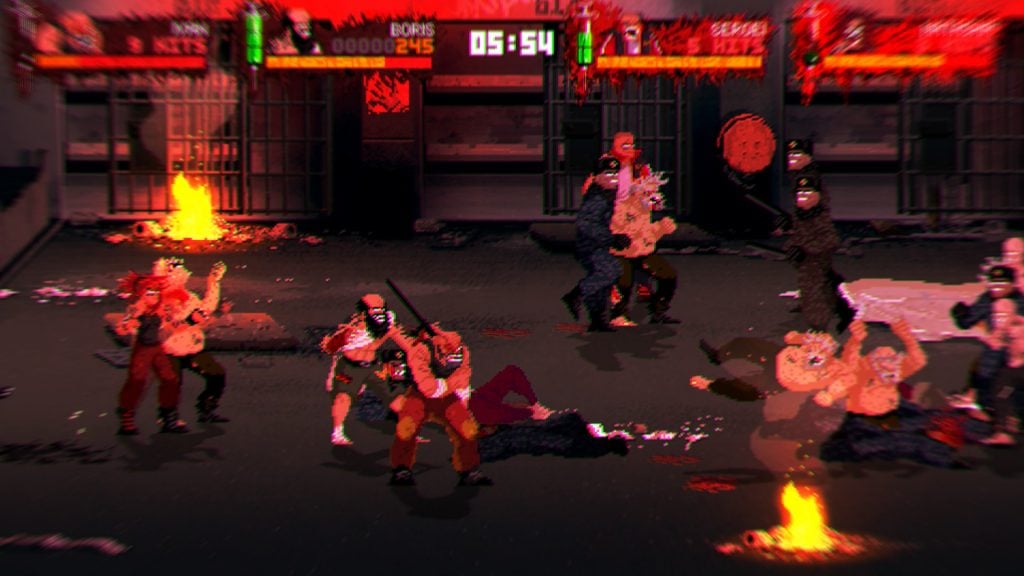 Fights can get downright insane when there are dozens of people on screen.

Unfortunately the actual story isn’t worth paying attention to. The writing just doesn’t seem to fit with the game at all. First, all four characters have the same dialogue, so it doesn’t matter if it’s the older, smart character or the crazed lunatic, they both sound the same. The bigger issue is the writing sounds like something from a 90’s kid cartoon, albeit with profanity littering every sentence. Characters just don’t talk like you’d expect them to, and Russian back-alley fighters talking like 90’s American caricatures just feels weird.

The saving grace of course is the gameplay, and really that’s what we’re here for. No one played River City Ransom or Double Dragon for the plot, and Mother Russia Bleeds is no different. Anyone familiar with beat-em-ups should feel right at home, delivering combos of fast attacks, heavy attacks, grabs, and aerials with ease. Enemies can take a beating so you’ll need to corner them one by one, use heavy kicks to clear out groups, and use the brutal finishers to make sure they stay down.

Controls work well on the gamepad, though keyboard controls feel weird. Thankfully the game never gets too bogged down by confusing combos or anything overly complex, so no matter how you play it you should feel fairly comfortable. If there’s one gripe with the gameplay, it’s more a gripe with the genre in general, in that lining up shots can sometimes be difficult on a 2d plane. This is rarely a major issue, however, and one quickly forgotten as you dish out pain on an epic scale.

So what sets Mother Russia Bleeds apart from other beat-em-ups like the ones mentioned above? First is its co-op. You can play with up to four friends locally, or just run through with a bunch of AI. Humans are preferable, since some of the more interesting and challenging fights require tactics the AI just seems to have trouble with. More then anything though, it’s that signature style Devolver has developed with the games it publishes that elevates this game. Mother Russia Bleeds takes a healthy dose of inspiration from Hotline Miami, as well as Enter the Gungeon and Broforce. It’s a mix of high energy music that blows your ears away, beautiful pixel art that seems way too detailed for its low-res look, and gobs of over the top violence and gore.

This can’t be overstated: Mother Russia Bleeds is not for the faint of heart. If the subject matter of drugs and violence wasn’t enough of a warning, then things like beating up animals and women, horrifying displays of nudity and sexual deviancy, using illicit drugs to fill your health or go berserk, and the absolutely brutal ways you finish off your foes should scare off those with weak constitutions or particular sensitivities. Unlike Hotline Miami, we don’t get the separation of a zoomed-out overhead view either. In fact, many of the nastiest things shown will have the camera up close and personal. Some may find this just another part of an attractive package, and the violence does seem to fit with its 80’s machismo style, but it does beg the question of where the line needs to be drawn between tasteful violence and outright snuff. 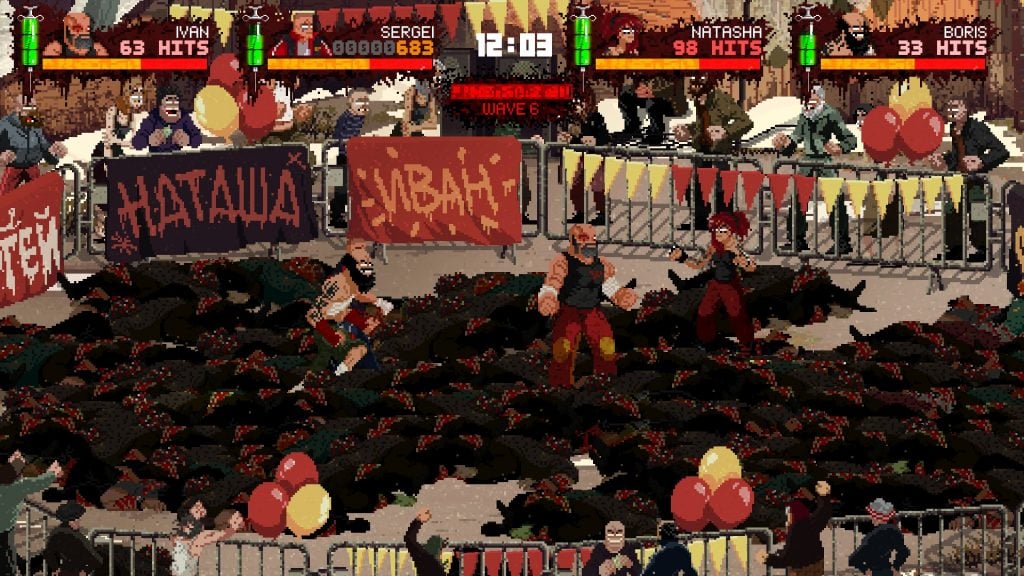 Visually, Mother Russia Bleeds is great. The pixel art does a fantastic job of both making the game feel like its old-school fore-fathers, while also portraying the horrors of late Soviet era Russia. Colours pop nicely, level geometry varies to keep you on your toes, and backgrounds are chock full of detail that make you pause after every fight and drink it all in. Characters are well done too, and the four heroes are wisely much more distinct then the enemies you fight, making it easy to keep track of them in the massive melees. There’s a decent variety of enemies across the board, though levels tend to re-use the same sprites over and over, which can occasionally be boring and confusing.

On the audio front, Mother Russia Bleeds is an absolute knockout. The music is everything we’ve come to expect from a Devolver studio: bassy techno tracks that keep your blood rushing as you murder your way forward. Plenty of attention was paid to the sound effects, and every punch, smash, smack, and pound sounds weighty and painful as you dole out your hatred. There’s no voice acting to speak of, which might be for the better considering the poor quality of the writing, but anything other then the sounds of battle would likely just be drowned out anyway.

Mother Russia Bleeds is a fantastic entry into a genre that doesn’t get nearly enough love. Between the lengthy campaign, three difficulty options, several modifiers to change the gameplay, and unlockable arena fights, there’s plenty of reason to keep coming back. Its easily the best beat-em-up in years, especially on PC, and well worth it for fans of Devolver’s other blood-soaked pixel-art games. Mother Russia Bleeds indeed, so bring a bucket and a few friends.