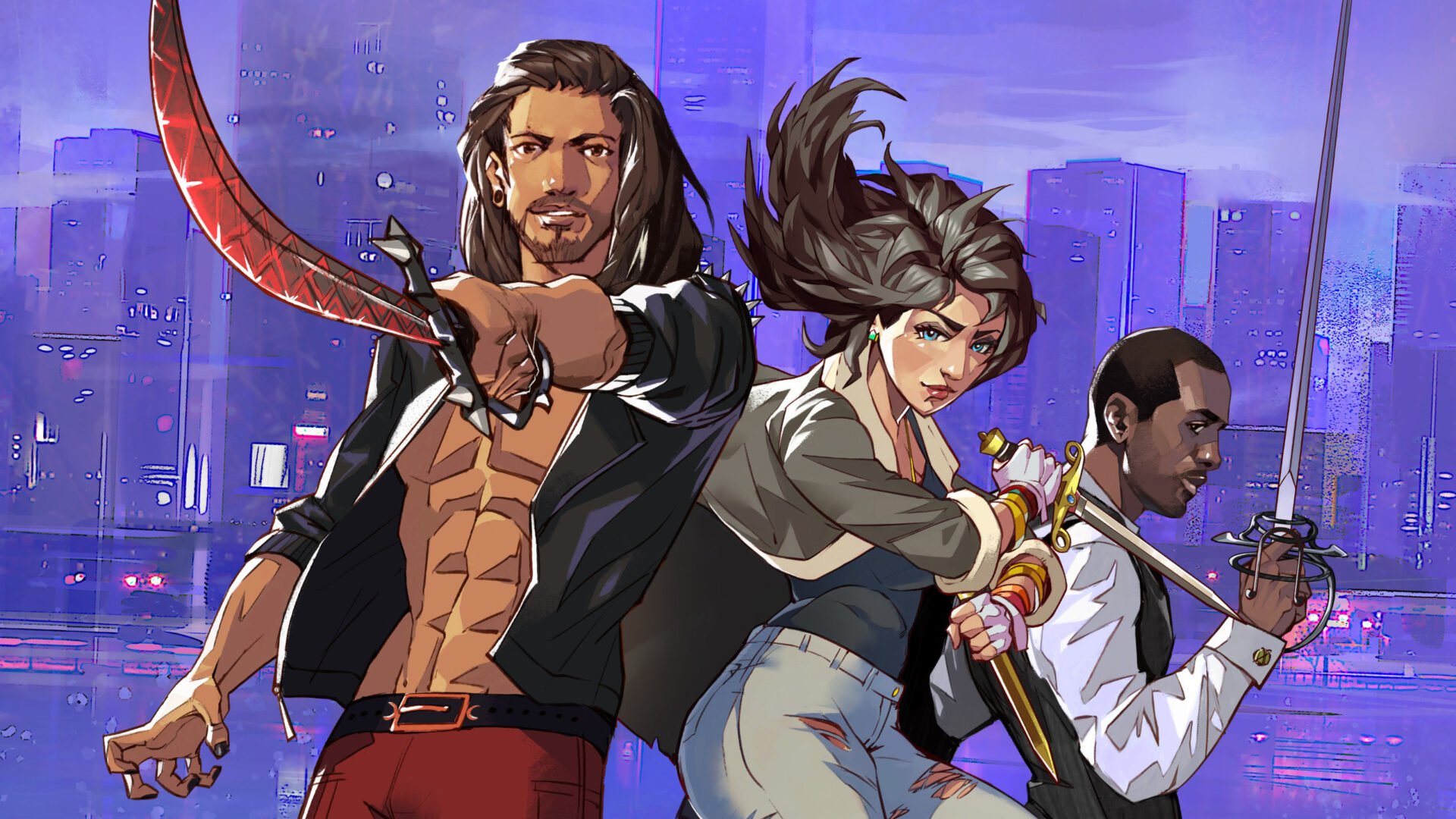 Boyfriend Dungeon proves that even the unlikeliest couples can still be perfect matches for one another. In this hotly anticipated release, developer Kitfox Games blends the roguelike and the dating simulator genres with one ingenious twist: the weapons you wield in combat can morph into eligible singles for you to date. This concept may sound silly on paper, but in practice, Boyfriend Dungeon uses it to provide a compellingly genuine portrayal of modern love. It may not be the most robust dungeon crawler around, but with well-written romances, addictive action gameplay, and an impeccable sense of style, Boyfriend Dungeon delivers a date worth remembering.

Sharpening Up Your Love Life

Boyfriend Dungeon sends players on a summer getaway to Verona Beach, a picture-perfect coastal town where you can get out of your comfort zone, meet new people, and maybe even discover your soulmate. Coincidentally, many of the town’s residents have the largely unexplained ability to transform into weapons at will—a particularly useful ability, considering that one of the area’s main attractions, “The Dunj,” is a sprawling dungeon crawling with monsters to fend off. Over the summer, you’ll divide your time between fighting through the Dunj and taking your half-human half-weapon companions on dates to get to know them better, form friendships, and, if all goes well, fall in love.

Although there is an overarching plot, the most memorable story beats in Boyfriend Dungeon are the ones that you forge for yourself on dates with your weapons. The game boasts a diverse cast of dateable characters, representing hugely varied personalities, gender identities, and backgrounds: there’s Sunder, a talwar who owns Verona Beach’s most popular nightclub; Valeria, a strong-willed dagger with a passion for street art; Isaac, a refined estoc who also owns a successful business; and many more. No matter who you choose to date, each character is a viable potential partner thanks to their compelling quirks and often surprisingly deep backstories.

Whether you’re chatting with your weapons over text or taking them on visual novel-style dates, each character shines through the game’s writing. The dialogue deftly balances between embracing the game’s inherent silliness while never shying away from serious topics when necessary. There may be more than a few weapon puns strewn throughout the game (who doesn’t love to go scythe-seeing for a date?), but there are also many instances where characters open up about their mental health, past trauma, or deepest feelings, bringing these weaponized hotties to life with human emotions and experiences.

Ultimately, Boyfriend Dungeon has to be one of the most flexible, open-minded dating simulators around. Not only does it have diverse representation with male, female, and nonbinary characters, but it also empowers you to pursue your own kind of romance. You can choose to date only the blade that most resonates with you, go fully polyamorous and woo every weapon in town, or opt to be entirely aromantic and just hang out with a cat all day—the choice is up to you, and the game is endlessly supportive and understanding of whichever decision you make. With dynamic dialogue options affecting how far you can take each relationship, you really do have the ability to direct where each romance goes according to your comfort level.

With so much to love in the individual dates, it is such a shame that the game’s main plot can feel so jarring. In stark contrast to the largely upbeat narrative arcs of the character romances, the main plot deals with dark topics like stalking and harassment in graphic detail. Although the campaign does reinforce the game’s uplifting messages of mental health and consent, these serious scenarios can come as a shock to players who were won over by the game’s lighthearted marketing. Even then, though, the sheer positivity reinforced through the rest of the game means that it still ends on a hopeful and wholesome note as a champion for healthy relationships.

Of course, although the dates are Boyfriend Dungeon’s main attraction, they’re not the only thing you can do in Verona Beach. You can also take breaks from the relentless romance by venturing into the Dunj, wielding your weapons/dates to cut down monsters and forge a path onward. Gameplay in this section is par for the course for any traditional isometric dungeon crawler: with a handful of simple combos at your disposal, you can slice through enemies, plunder loot, and explore a procedurally generated labyrinth until you eventually reach a climactic boss encounter.

The roguelike action in Boyfriend Dungeon certainly leans toward the more basic side, but it boasts just enough intricacies to keep things interesting. Each weapon comes with its own unique playstyles and abilities: Valeria’s dagger lets you zip across each arena with lightning-fast combos, while Sunder’s talwar allows for slow yet devastating strikes that can take out many enemies at once, to name just two examples. Even the dungeon itself presents some unique quirks, with each level being designed around a specific social fear such as intimacy or attention: sentient cell phones attack you in the “Fear of attention” level, while bouncing margaritas go on the offensive in the “Fear of intimacy” section.

What really makes the Dunj worthwhile is how it connects to the relationships you have with your weapons. The more you use a weapon in combat, the more you can increase your “love level” with it – and the higher the love level, the more dates you’ll be able to go on. There are even hangout spots strewn throughout the Dunj, such as fountains, bars, and arcades, where you can take a break and enjoy a quick conversation to grow a deeper connection with your weapons. Meanwhile, successful dates can make you grow closer with your weapons, allowing you to gain new abilities, status buffs, and combos to use in combat. In these ways, Kitfox Games expertly ties the game’s two main gameplay loops together into a cohesive whole. Whether you’re going on dates or facing your fears in the Dunj, you’re still forming stronger bonds with your weapons.

Even then, however, the dungeons can ultimately feel underdeveloped. They aren’t especially challenging, and with generous checkpoint systems that allow you to start new runs from later levels of the Dunj immediately, it isn’t hard to see each one through to its conclusion. Boyfriend Dungeon only provides two unique, full-fledged Dunjs, meaning that if you want to grind up in the post-game, you won’t have much by way of variety. That’s not to mention how the procedurally-generated levels can sometimes result in empty dead ends or hallways that trap you with your back to the wall while enemies gang up on you, effectively dooming you to a failed run. Issues like these are ultimately minor concerns in the grand scheme of the game, but they are still unfortunate blemishes on the experience.

Hitting the Town in Style

Of course, no date is complete without dressing well, and Boyfriend Dungeon has style in spades. From the beautifully designed character portraits to the many outfits you can wear in the Dunj to the minimalistic animations transitioning between gameplay events, Boyfriend Dungeon oozes with personality in nearly every respect. The appropriately airy soundtrack, filled with poppy anthems and electric backing tracks, effectively sets the mood for the romantic adventures to come and solidifies the game’s colorful presentation.

Boyfriend Dungeon seamlessly mixes a plethora of gameplay styles and narrative arcs into one surprisingly cohesive whole, a ridiculous yet heartfelt romantic romp where you can freely wage love and war. Its main plotline may feel out of place and its roguelike action can feel underbaked, but its well-rounded gameplay loop and compassionate portrayal of diverse relationships and perspectives more than make up for the handful of awkward issues it presents. Whether you’re looking for another well-made roguelike to while the hours away or a unique take on the dating simulator, Boyfriend Dungeon easily deserves a second date.