In the build-up for World of Warcraft: Battle for Azeroth, releasing on August 14th, Blizzard has been building a story strung across cinematics, books, comics, and quest-lines. From the ending of Legion’s storyline, to all-out war between the Horde and Alliance in the War of Thorns and Battle for Lordaeron, we’ve recapped the timeline of events so you can follow Warcraft’s story as it prepares for a new expansion, and reshapes the world of Azeroth as we know it.

The Third Invasion of the Burning Legion

Legion began with Gul’dan tearing open a new gateway for the Burning Legion to invade Azeroth, an army of demons led by the titan Sargeras, who have long sought to wipe out all life in the universe.

King Varian Wrynn died bringing down a fel reaver, making his son Anduin King of Stormwind, whilst the Horde Warchief Vol’jin was killed by a felguard’s poison, and passed on his title to Sylvanas Windrunner, setting the two up as the central opposing forces for Warcraft: Battle for Azeroth.

Meanwhile, Magni Bronzebeard, King of Ironforge, finally awoke from his prison of diamond and returned as an avatar of Azeroth itself. Leaving the rule of Ironforge to the Council of Three Hammers, he led the discovery of the Pillars of Creation: ancient relics which could seal off the Legion rift and end the demon assault.

The Return of Illidan

After suffering many losses, the Alliance learned that Gul’dan planned to attack the Vault of Wardens, the ancient prison in which Illidan, the primary antagonist of Warcraft: The Burning Crusade, was entombed. Pushed to desperation, Maiev Shadowsong, Illidan’s jailer, decided to do what she had sworn she never would and released the Illidari: fel-touched demon hunters who once fought for Illidan, but she was too late to stop Gul’dan from stealing Illidan’s body.

To reclaim Illidan, forces marched on Nighthold where they discovered that Gul’dan had channeled Sargeras’ soul into Illidan’s body. Players battled Sargeras, and in the final moments of the scene Illidan regained control of his body and tore Gul’dan apart.

Illidan created a new gateway between Azeroth and Argus, home of the Burning Legion, so that the forces of Azeroth might follow Sargeras there and end the Legion once and for all. On Argus they met Alleria Windrunner, Turalyon, and the Army of the Light, who were long presumed dead after disappearing through the Dark Portal so many years ago.

In the final raid of Argus, the heroes vanquished the highest ranks of the Legions’ forces and finally subdued Sargeras with the help of the Pantheon of Titans. Sargeras was imprisoned, and Illidan vowed to remain as his eternal jailer. 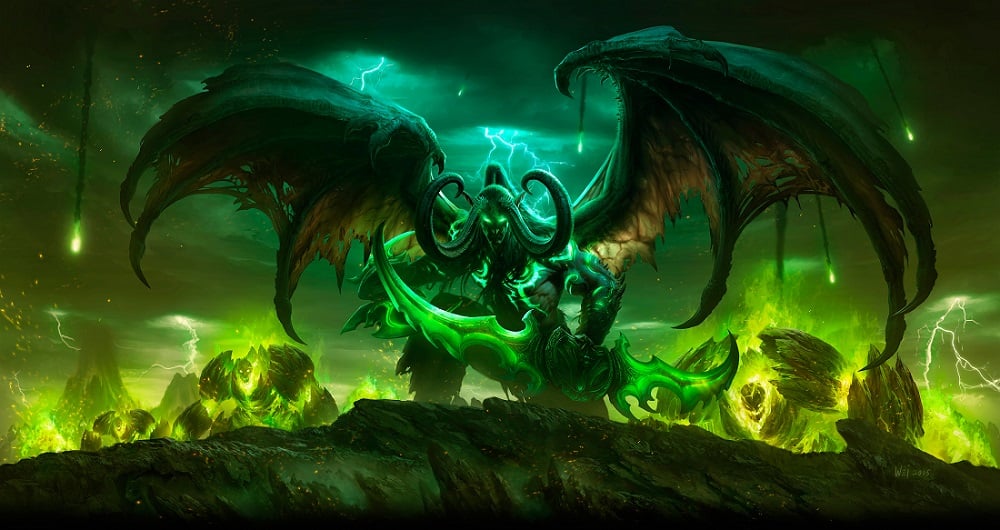 However, in the moments before his imprisonment, Sargeras managed to plunge his sword into Azeroth itself, piercing the land of Silithus. Since then, goblins have discovered that the sword revealed veins of azerite: an ore formed from the blood of Azeroth itself which has strange and wonderful effects on those who touch it. The Horde began an arms race to collect the azerite, which the Alliance are only now learning of, and whoever controls it will have the upper hand in the coming wars.

The Burning of Teldrassil

In Azeroth, Sylvanas, Leader of the Forsaken and Warchief to the Horde, begins to fear that Teldrassil is a tactical vulnerability in Kalimdor, especially now that the race for azerite has begun. An in-game quest line, The War of Thorns, follows Sylvanas and the invasion of the Night Elves’ ancient home.

The Horde armies decimate Darkshore and lay siege to Ashenvale, until they are halted by Darnassus’ last defense: a wall of wisps keeping the Horde invasion at bay with the last of their spirit. To distract the wisps, Saurfang leads a surprise attack from the northern mountains of Felwood, and gives the Horde armies an opening.

Afterward, he searches for Sylvanas, and finds her locked in battle with Malfurion Stormrage himself. Startled, he throws an axe at Malfurion’s back which knocks him out cold, but he immediately regrets the dishonorable blow. Sylvanas tells him to finish Malfurion off and leaves him in the woods, but Saurfang cannot bring himself to do so. Tyrande Whisperwind appears from the forest. She races to Malfurion’s side and spurns Saurfang for his honourless war.

Saurfang refuses to claim a coward’s kill, he tells Tyrande that he will not fight her and even warns her not to return to Teldrassil with Malfurion, for it will surely fall into the hands of the Horde. Tyrande flees to Stormwind with Malfurion, leaving her people to fend for themselves as Darnassus falls, and Saurfang returns to the frontline.

There, to the horror of the Alliance, and even to the Horde itself, Sylvanas orders that Teldrassil be burned to the ground, and the World Tree is consumed by fire.

In Darnassus, it is Mia Greymane who battles to save the panicked Kaldorei. King Genn Greymane teleports to Darnassus to force her to return to Stormwind before the portals fail, and they leave the Night Elf Priestesses to their decision: to die fighting in the defense of their home. As the Ancients burn and the boughs of Teldrassil fall into the sea, the Priestesses of the Moon sing a final prayer to Elune, and send the Night Elves into an enchanted sleep so they might die a painless death.

In Stormwind, King Anduin swears vengeance on the Horde, and to bring justice to Sylvanas Windrunner: a leader without honor and beyond the path of redemption.

The Battle for Lordaeron

In retaliation for the burning of Teldrassil, the Alliance launch an attack on Undercity, the ancient Capital of Lordaeron now home to Sylvanas’ Forsaken. In the in-game questline players witness the siege of Lordaeron.

The Horde evacuate their citizens as the Alliance army pushes towards Undercity. The Forsaken drive them back by releasing Blight onto the battlefield, but their advance is halted by Jaina Proudmoore, who rises above the city on a ghostly ship, turning the blight to harmless smoke and decimating the city walls with a wave of her hand.

The Horde retreat, and in the chaos Saurfang goes missing. They rally and try again to halt the Alliance’s advance with a choke-point of blight, but High Tinker Mekkatorque’s machines freeze the poisonous gas, and Alleria appears on the battlefield through a portal dark as the void. King Anduin calls down a holy aura of Light, and Sylvanas is forced to retreat.

As the Horde forces flee back to the courtyards of Undercity they discover Saurfang, overcome with the realization of what Sylvanas plans to do next. Broken, he questions how Sylvanas can fight without honor, but she replies that honor means nothing to a corpse and that she would do anything to protect the Horde. They leave him to his thoughts, and the Alliance forces discover Saurfang, alone, though not defenseless.

It is clear that Varok Saurfang has struggled to reconcile his role in the massacre at Teldrassil and his allegiance to Sylvanas. He is a decorated veteran of the Horde, the leader of Orgrimmar, and an orc who knows the meaning of honor and duty.

In the cinematic ‘Old Soldier’ we see Saurfang’s hope waver at the dawn of the Battle for Lordaeron, but a young troll turns him back, and together they agree to carry on “without armor”, not hiding, but fighting with honor. True to this, Saurfang cannot follow Sylvanas’ final plan, but instead fights the leaders of the Alliance single-handedly. He fails, of course, and is captured by the Alliance forces.

In the final moments of the Battle for Lordaeron, King Anduin Wrynn and the Alliance forces enter the heart of Undercity, and are greeted by Sylvanas, alone, reclining on her throne. With their victory ensured, and Alliance forces flooding into the city, Anduin gives Sylvanas one last chance to surrender.

She refuses, transforming into a banshee, she shrieks and gives the signal to Nathanos to trigger their trap. He fires an arrow with Sylvanas’ own bow and ignites an explosion of blight that destroys Undercity itself, reducing it to a pile of blasted poison and rubble. Jaina teleports the Alliance leaders away, but Undercity is lost to the Horde and Alliance in one single blow.

The Horde ultimately lose the battle, but should Sylvanas continue on her campaign of death, Saurfang stands as a symbol of the old Horde, ready to take up the mantle of an honorable Warchief, if he can find a way to return to his people.

This is just the beginning of Battle for Azeroth’s story, and other forces are at work besides those of the Horde and Alliance. With the rumblings of the Old Gods, and the re-emergence of the Naga Queen Azshara, the factions will need to find some stability if Azeroth is to survive the coming conflict.

In our Warbringers lore recap, we’ll be looking at the characters of Sylvanas, Alleria, and Vereesa and what remains of the Windrunner sisters, as well as Jaina’s transformation into an embittered fighter, and the origins of Queen Azshara. For now, it’s clear that nowhere will be safe in the coming Battle for Azeroth.