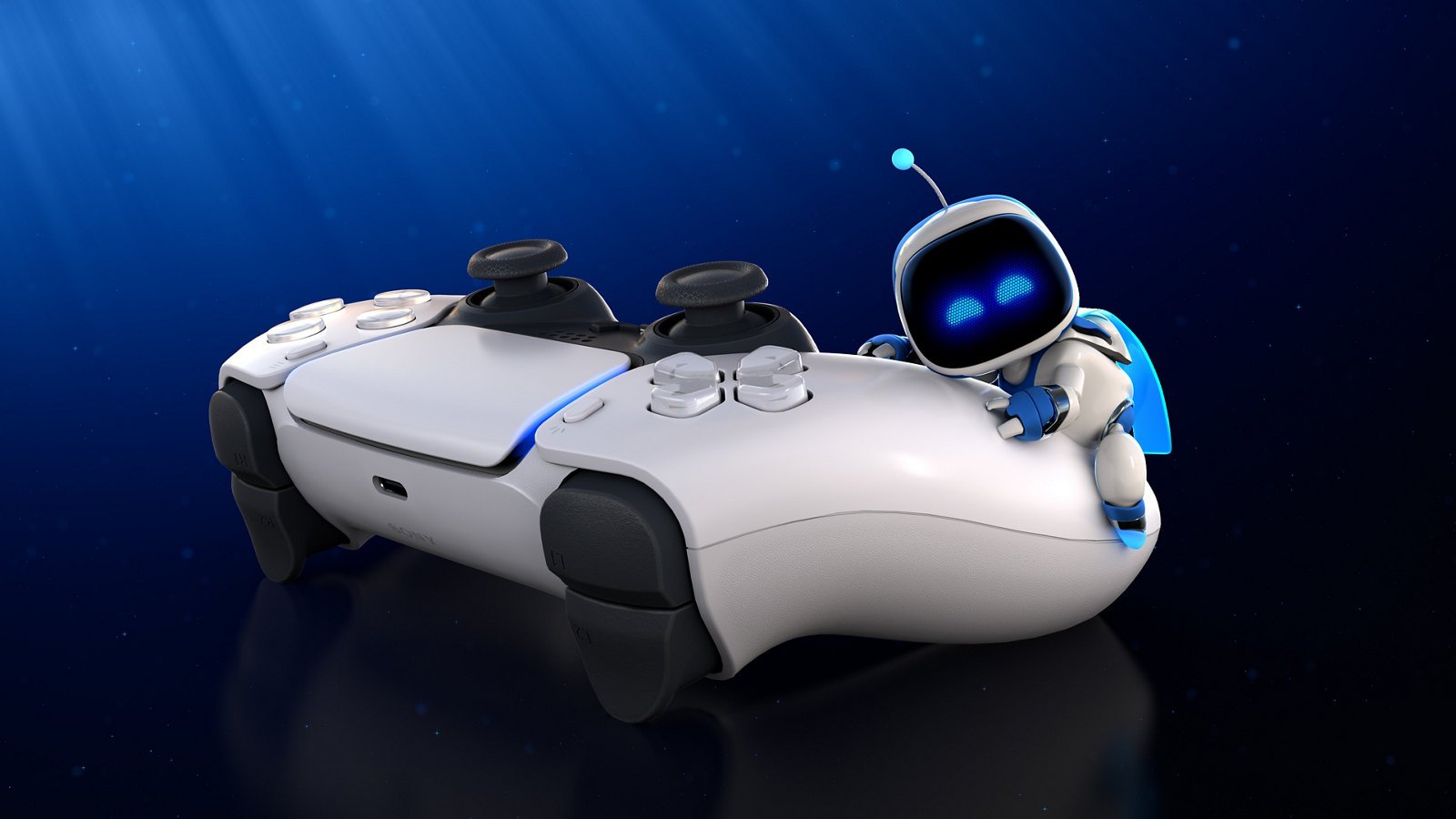 With the latest in console gaming finally, firmly, established, the internet is awash in numbers and terms. 4K. 1080p. 60FPS. HDR. Ray-tracing. But to the average gamer, all they want to know is: “What new games can I play?” They want to point to a TV screen and say “This. This is what the hype is all about.” In the case of Astro’s Playroom, the difference is both easily felt and seen. The latest generation is here, and its existence can be justified simply be holding the DualSense controller and playing a pack-in game for five minutes. Astro’s Playroom may present as a simple 3D platformer slash tech demo. In actuality, it’s a quiet revolution that is a blast not just to play, but to complete.

For all their horsepower, the PlayStation 5 and Xbox Series X will exist simply as expensive doorstops if there isn’t anything to play. Sony circumvents this problem by including Astro’s Playroom in every PlayStation 5. Marketing for the PS5 has emphasized the DualSense controller and the inner workings of the machine, which is faster and more powerful than ever. But Astro’s Playroom takes players by the hand and leads them down to the sandbox to remind them that “play” is the system’s ultimate goal.

The first time Atro’s Playroom is booted up, players are taken through a demonstration of the capabilities of the DualSense controller, one of the PS5’s big new draws. Rather than run through a short platforming segment or something similar, the controller is projected onscreen as a huge, 3D object and the player interacts with it. After pulling the adaptive triggers, scribbling on the touchpad, and blowing into the microphone, the controller onscreen opens up, and hundreds of tiny little white robots are poured into it from offscreen. Each and every one is felt in the controller’s rumble. It’s a cute way to get players to visualize that for all the interesting tech packed into every DualSense, it’s also full of fun.

After the short demo, players can begin Astro’s Playroom properly and the sense of fun continues. Astro, the caped bot who starred in the PlayStation VR exclusive ASTRO BOT Rescue Mission in 2018, launches out of the same controller used for the demo and into a hub world of circuits and wires. Astro’s Playroom extends the fantasy of the controller full of characters, positing that the PlayStation 5 itself is full of itty-bitty personality-filled robots dancing, playing around, and making everything onscreen work the way it should. It’s unbelievably cute. But more than just being squeal-inducing, Astro’s Playroom nails what it sets out to do: make the case for new technology, while also mastering a heartfelt tone. It is a game from the future, casting a nostalgic look back at the past.

Buzzwords are fruitless if they don’t translate into anything real. Sony lets Astro’s Playroom speak for itself. In every world, new concepts are introduced that take advantage of the PS5’s hardware. Every stage has elements, from the visual to the haptic, that will make players smile and reinforce just how much potential the PlayStation 5 has. Even the game’s main hub subtly shows off the controller’s new sensitivity. On his way to one of the doors that open up to the four main worlds, Astro will likely walk over more than one surface. There’s the metal floor, a glass dome, even some grassy knolls. Each one provides unique feedback on the controller. Astro’s tiny steps clank and clatter differently depending on where they are walking. It must be felt to be believed; the different tippy-taps are subtle yet impactful.

The game itself is an oldschool collectathon, where the friendly bot travels between four different zones, each with four levels, in search of artifacts and puzzles pieces. Astro jumps between platforms, defeats enemies, and solves bite-sized puzzles to make it through each short stage. The final stage of every zone contains a piece of significant Sony history in the form of a collectible, and finishing all four stages unlocks one final test. This simple framework gives the developers plenty of room to experiment with control schemes and mechanics. Some are more successful than others, but every stage is worth playing through just to see what comes next.

Diving into any of the four main biomes lets players experience even more interesting uses of DualSense’s capabilities. A snowstorm forces Astro to hunker down and push through the wind, and it really feels like they’re meeting resistance from gusts of air. Jumping onto a block of ice causes Astro glide and triple-lutz their way across the surface. Even the simple act of jumping feels satisfying, as Astro has short hovering capabilities that provide a little extra lift.

Astro’s Playroom is frequently gorgeous, and occasionally stunning. The cartoony aesthetic is a welcome reminder that for every dour The Last of Us and Gears of War that this new generation will inevitably bring, there will also be brightness and color. The worlds that Astro explores include everything from the neon chilliness of Tron to the warmth and saturation of Super Mario Sunshine. Everything looks amazing and it’s hard to believe just how smooth it all performs. Every action, from the smallest hop to leaping off a tall high dive, is satisfying.

There are several different suits that Astro can climb into, for short gameplay segments. These provide some of Astro’s Playroom‘s most satisfying and frustrating moments. Several of these suits ask the player to use motion controls to progress, and while most of the time it works, it can be frustrating. In one 2D segment, a particularly springy suit is controlled by the player holding down and then releasing a trigger while tilting the controller the direction they want to move. It’s chaotic and fun, but can also result in a lot of missed jumps. Fortunately, there are no lives to keep track of or “game over” screens to contend with. Astro’s Playroom aims to be an easygoing experience, and it mostly succeeds.

It remains to be seen how much of the DualSense’s truly revolutionary new features will be used in future PS5 games. Sony Interactive Entertainment clearly had a blast making Astro’s Playroom and wringing as much use as possible out every available feature, and the end result is a full-fledged game. It would have been perfectly acceptable to keep the game short and feature-rich, but it actually contains a surprising amount of depth. Rather than simply show off the PS5 controller and technical wizardry, Astro’s Playroom makes a play for gamer’s heartstrings.

It may be difficult to express how Astro’s Playroom feels to play without a DualSense in hand. However, it is easy to say that whether or not the player is a diehard Sony fan, Astro’s Playroom is tremendously satisfying to complete. Every collectible and reference is a tiny dopamine drip. Finding achievements and exploring every inch of the world makes earning the platinum trophy feel joyous.

In many ways Astro’s Playroom is a celebration not just of Sony’s contributions to video games but of the medium as a whole. Sprinkled throughout levels are artifacts from Sony’s long history in the entertainment space, and seeing these objects rendered in 3D is an instant throwback in the best possible way. Each artifact is accompanied by some text, usually a pun or a callback to a specific game. When a player finds the twin-stick DualShock controller, they also get a reference to the original Ape Escape, an unexpected deep cut from Sony’s library. These moments add up, showing that Sony and the PlayStation brand have done a lot for video games as a whole. Console wars aside, it’s neat to see that Astro’s Playroom also functions as a virtual museum of sorts. As often as Sony seems to piggyback off of ideas from other companies (the PlayStation Move controller still looks and functions suspiciously like a Wiimote, colored orbs be damned), it is still extremely cool to see generations of hardware all at once and trace the evolution of 3D gaming.

Aside from the artifacts, Astro’s Playroom is jam-packed full of references to great Sony IP from the past and future. Eagle-eyed players will spot different ‘bots cosplaying as Kratos, Crash, and even a Hunter from Bloodborne. The game is full of little homages from PlayStation exclusives of the past and present, and across every era. There is great pleasure to be had in seeing the kid-friendly bot version of Pyramid Head dragging a hapless victim away, or watching robo-Tomb Raider diving across a gap to shoot at a dinosaur. Even if the player hasn’t experienced these games, maybe one day they will, and a lot of the pleasure of Astro’s Playroom is derived from returning to the game and confidently declaring, like Captain America in The Avengers, “I understood that reference.”

Hope for the Future

Astro’s Playroom is much more than the sum of its parts. It is equal parts tech showcase, reverential homage, and genuinely good platformer. It stands on its own, and is also buoyed by decades of goodwill. Most importantly, it’s a relentlessly adorable jumping-off point for the latest generation. Rather than feel like a members-only club, Astro’s Playroom invites players from every generation to dive into the deep end and get in on the fun for themselves.