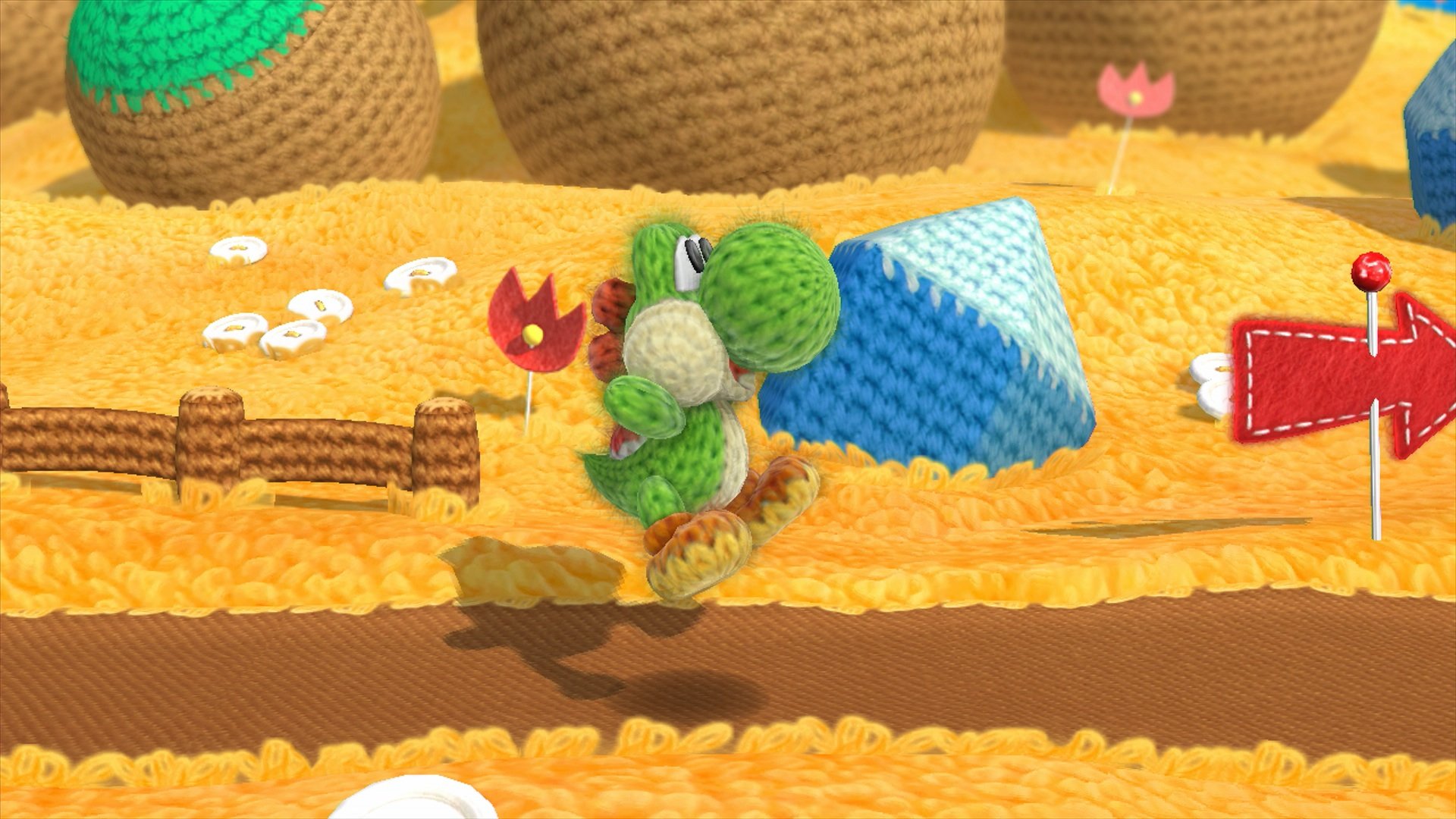 Whether or not you consider Super Mario World 2: Yoshi’s Island a part of the core Mario series, it’s hard to argue that Yoshi himself didn’t make a big splash in his first time out as the hero. Yoshi’s Island has stood the test of time and is regarded by many as one of the all-time platformer greats, placing the former sidekick firmly in Nintendo’s stable of mascots. Since those golden years of the SNES, Yoshi has struggled to again reach the high bar set by that classic, and while some of his games have been decent, they’ve thus far kept the versatile reptile, once regarded as a highly promising starter, relegated to the B-team with his pal Kirby and towel boy Chibi-Robo. Yoshi’s Woolly World, a warm and fuzzy new entry in the series, won’t quite change that by itself, but it serves as the best reminder in a long time that there’s a reason fans fell in love with that little green dinosaur in the first place.

There’s no better way to get noticed than by standing out from the crowd, but trying to match the memorably gorgeous pastel aesthetics of the 16-bit masterpiece has been a tough task over the years. However, with a new yarn-based look, similar to Kirby’s Epic Yarn but far more fleshed out, Yoshi once again shows that he cleans up nice. The developers at Good Feel have knit Woolly World into a tapestry of comfort, each stage a soft pillow of colorfully crocheted hills and caverns set amidst beautifully woven backdrops, and fluffy cotton ball clouds that you just want to reach out and squeeze. Subtle touches go a long way toward eliciting smiles, like enemies that wield crochet hooks instead of spears, or Yoshi’s feet weaving into skates when he’s on the ice.

Life is amazing when you’re a yarn dinosaur.

The textures pop off of the screen in every frame, fooling your eyes into believing the tactile nature of what’s on display, and unlike the clay in Kirby and the Rainbow Curse, you can actually see it in glorious HD. It really is pure eye candy, one of the best looking games on the Wii U, and the soothing visuals go a long way toward supporting the idea that this is a more relaxed platformer, nothing to stress over, no reason to sweat through a white-knuckle grip on the gamepad. Just enjoy Woolly World at your own leisure, wrap yourself in its cozy blanket.

Luckily there’s more to do than gape in a dreamy stare, and though Yoshi’s Woolly World is Nintendo-lite when it comes to platforming, it still maintains that addictive quality that the best Mario games have, rarely repeating itself and sprinkling a variety of interesting concepts through the six worlds and over fifty stages that keep it consistently fresh. I never had difficulty completing a level, but due to the inventiveness and types of platforming from one stage to the next, I never felt bored either. Instead, more often I found myself glancing over my shoulder at the increasingly late hour, thinking “just one more”. I haven’t felt that way since Super Mario 3D World, and while Woolly World nowhere near matches that in terms of sheer creativity, that it could generate shades of that compelling feeling speaks to its quality.

These smiling things are what’s become of your friends.

The challenge comes from collecting the various items scattered about and cleverly tucked away amongst the folds, and the rewards which finding them incurs. Full health only nets a meaningless “good job” star, and snagging enough of certain jewel beads, aside from allowing you to buy helpful item badges, unlocks stamps that can be used in the Miiverse. These aren’t necessarily super motivating, but seeking out all the familiar smiley face flowers in each world is the only way to reveal tougher bonus levels, and each stage contains five skeins of yarn which, when reunited, will stitch themselves back into one of the many Yoshis that evil sorcerer Kamek has kidnapped. These thematically patterned Yoshis, as well as those activated by tapping select Amiibos, can then be swapped in to replace the standard green model. It would’ve been nice if these costumes came with their own set of abilities, but badges that grant powers like immunity to fire or the assistance of the lovable Poochie cover this area fairly well for players who are having trouble getting through. They’re still adorable, though. Seasoned players shouldn’t have too much problem finding most of these items the first time around without resorting to special help, but only through replay and scouring every nook and cranny will the most tricky ones be discovered.

Bringing a friend along can speed this process up, but in typical Nintendo tradition as of late, messing with teammates by eating then throwing them becomes almost more fun/rage-inducing than working together to tackle the actual point of the game. Of course, your buddy could be helpful in assisting you bag that barely out-of-reach Wonder Wool, but why do that when they could slurp your Yoshi up and spit him into the fire instead? Using a Yarn Yoshi Amiibo creates a dino pal devoid of those diabolical tendencies to watch your back, but it simply mirrors your moves. This was intended to help, but ultimately becomes extremely distracting, especially in some of the more chaotic (for Woolly World) moments.

Still, Woolly World doesn’t demand that you do any of these extra things, so if you’re content to let Shy Guy Yoshi or Cookie Yoshi remain unraveled at the seams, unstuffed for all of an agonizing eternity, so be it. It’s all good, man. There’s even a Mellow Mode that grants the ability to fly through the entire stage that will no doubt irk hardcore purists who should go play Donkey Kong Country: Tropical Freeze for their trial by fire. This game serves a different purpose, and besides the occasional reminder that sometimes I sucked by suggesting a badge might prevent me from falling into that same pit yet again, the game doesn’t shove any easiness in your face. I want that yarn, but I want it the honorable way. Woolly World understands.

In the end, Yoshi’s Woolly World is easily the best Yoshi game since his heroic debut, and without an incredibly annoying baby Mario to boot. Hopefully, this represents a struggling mascot on the rise. So instead of steeling your reflexes for the task at hand, just sit back, relax, and enjoy the trip. Take in the quilted sights, curl up with the spot-on yarn throwing mechanic, tight jump controls, and good old-fashioned tongue-slinging that’s as satisfying as it ever was, and drift comfortably away to a happy place.