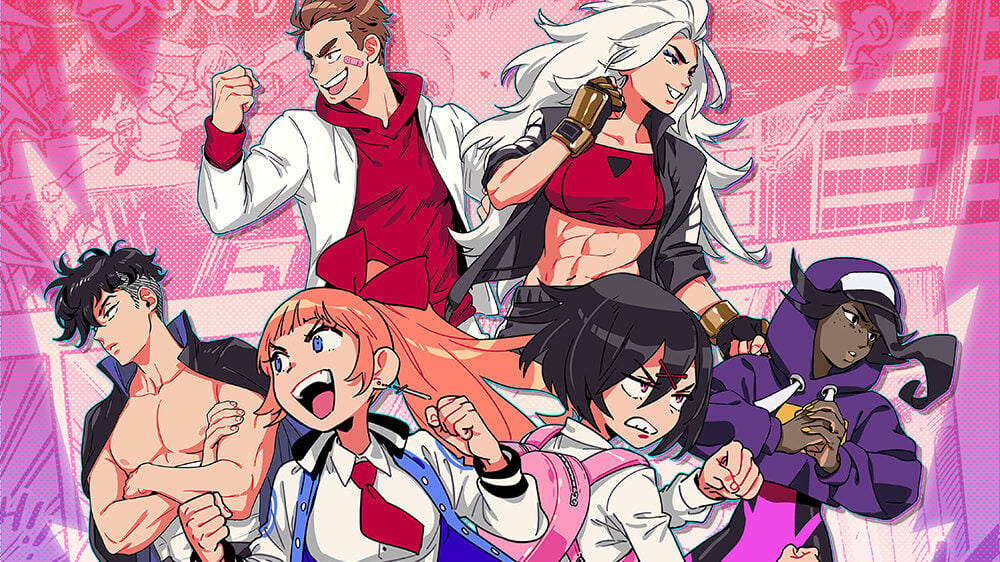 Jam-packed with versatile combos, charming characters, and dynamic environments, WayForward and Arc System Works’ River City Girls was already one of the most ambitious beat ‘em ups in recent memory when it released in 2019. According to its developers, though, this first title was just the beginning: with River City Girls 2, WayForward promises to deliver an even more expansive take on the beat ‘em ups genre with even more characters, moves, and scenarios—to the point that we may even have a River City cinematic universe in the making.

River City Girls may have been a wildly creative gender-bending approach to its series, but to hear WayForward describe it, the game was only the latest in a lengthy line of spin-offs and reinventions of the Kunio-kun franchise started by the now-defunct studio Technos Japan. Speaking with Goomba Stomp in a recent episode of the NXpress Nintendo Podcast, River City Girls series directors Bannon Rudis and Adam Tierney discussed the process of continuing this expansion of the River City universe, meeting fan feedback, and delivering a truly living world to explore.

Picking up immediately after the events of the first game, River City Girls 2 sees players once again control the eponymous Misako and Kyoko, their boyfriends Kunio and as well as new additions Marian and Provie, on a quest to curb stomp a new threat that’s arisen in River City. According to Tierney and Rudis, this sequel posed exciting opportunities for growing the series from the very beginning.

“One of the nice things about the River City Girls games is they’ve always been able to iterate off each other,” Tierney says. “We don’t really get to do that much—usually, when WayForward does a game, we work on it for a year or year and a half, we finish it, and then we’re done and we move on to the next one. But because of the structure of this, we could build on the city [in River City Girls 2], we can add more playable characters, we can add more enemies, more moves. The second game is this awesome opportunity to take the best of what we had in the first game and add to it: story-wise, character-wise, and move-wise, it’s so much larger than what we did in the last one.”

WayForward certainly had plenty of material to draw from. With more than 35 years of history under its belt, the River City series has continuously grown to encapsulate dozens of spinoffs with hundreds of unique characters between them—only some of which may be familiar to audiences outside of Japan, considering that only a handful were ever localized for international audiences. With this new River City Girls sequel, WayForward looks to represent that Kunio-kun legacy.

River City Girls 2 may have been developed with reverence for all the games in its series before it, but it was also created with an eye for innovation and progress, looking for ways to push the River City franchise in new directions visually and mechanically. Tierney and Rudis identify River City Girls’ lush pixelated graphics as one of the key factors distinguishing it from other entries in the series, a trademark they’re looking to continue in the later games.

“River City has been around for 50+ games,” Tierney says, “but the art style hasn’t really changed. The last few games still generally use what looked like NES sprites and we went into the brand knowing we wanted to change that—and it wasn’t because we disliked it…we love the art style. However, we didn’t want people to look at River City Girls and think, ‘Have I already played that one? Is that the one on PS2? And is that a remake of the NES ones?’ Reinventing the art style—making them taller characters, making them more colorful—that was one of our high priorities early on, so that people could look at our game and say, ‘Oh, I remember the River City game that had that bit of nostalgia,’ but be totally certain that this was something brand new and this wasn’t something that was just a remake or a port.”

That element of reinvention applies to the gameplay as well. Alongside its traditional action-packed beat ‘em up formula, the original River City Girls featured a number of gameplay scenarios that introduced unique objectives and challenges: early on in the first campaign, for example, Misako and Kyoko have to sneak into a security guard’s house without waking him, deftly avoiding obstacles strewn around the floor. Sections like these are poised to make a return in the sequel, and like the cast of characters, they’re bound to be greatly expanded.

“There will be multi-tiered quests,” Rudis describes. “It won’t just be a ‘Just go grab this and it’s done’ kind of thing. It’s, ‘Hey, I got this thing. Now, here’s the second part of this quest.’ The team and I refer to them as almost like mini games because of how much more elaborate they are.”

At the same time, shifting away from the routine gameplay loop poses some challenges from a design and accessibility standpoint: some players may not be as adept in platforming as they are in fighting, posing some challenges for designing the level to be as achievable yet rewarding as possible. “I did make a conscious effort of ‘Yes, this is a little mini game, you have to get past this,’” Rudis adds, “but this should be something anybody can get past—and should is the operative word.”

River City Girls 2 promises to continue these sections to a degree that wasn’t possible in the original River City Girls. “In the first game, we had so much to set up because we were doing it all from scratch—all the combat, all the navigation, all the world, all of the different systems, all the different levelings,” Tierney explains. “Since that was then able to carry over into the second game, River City Girls 2 got to dive more into those little side objectives and remix alternate styles of gameplay, because we would have loved to have done more of that in the first game.”

Fan feedback went into these new objectives as well: “One of the quests is an homage that people requested, and they got what they wanted,” Rudis teases. “That’s all I’ll say.”

“Marian is one of the new playable characters—she’s the girlfriend from the Double Dragon series—which was almost entirely because of the reaction from fans to her in her cameo in the first game,” Tierney says. “We like her. We’ve done a Double Dragon game previously, but when we had her as the shopkeeper [in the first River City Girls], people, just for whatever reason, lost their mind…everyone was saying, you have to put her in the second game. And we are just always listening to that stuff. It just kept building up, and once we got to the planning stage, it’s like, ‘Well, of course we got to put Marian in there—the whole world wants her in there.’”

“We did a level count recently, and me and the level designer were like, ‘What have we done?’”

No matter how much the roster grows, however, Rudis expresses a commitment to making the gameplay mechanics unique yet accessible for every fighter. “Whenever I do combat, I don’t ever want it to be an exclusive club of only people who can do combos and twitch gameplay and they’ve got faster reflexes. That’s why every button on the controller is of use.”

In true follow-up fashion, it’s not only the character roster that’s getting bigger. The original River City Girls was already a sprawling adventure for a beat ‘em up with a campaign that could take as long as 10 hours to see to its conclusion, but the sequel looks to extend that scope even further.

“We did a level count recently, and me and the level designer were like, ‘What have we done?’” Rudis says. “[River] City has gone through some construction and yes, it’s gotten much bigger…you’ll see some places in the first game that were under construction. Construction is done now.”

“I remember comparing the script—and both games have pretty constant dialogue and chatter between the characters—the second game’s script is something like three times as long as the first game,” Tierney adds. “I’m not going to say that the game is three times as long, but you can just take that for a clue of how big this game is going to be compared to the first experience. It’s pretty hefty.”

That additional scale affects the level design as well. “The levels themselves are much more vertical and horizontal, so there’s a lot more space to run around,” Rudis says. “There are a lot of secrets hidden around because I want people to fully explore. And some of the stuff you’re probably going to have to look up online how to even find it, because I want this to be a game where you’re going to have to explore every little nook and cranny—we purposely made levels for hiding stuff.”

Between the new levels, characters, and mechanics, River City Girls 2 looks set to be a wildly creative extension of the River City formula. Yet Rudis and Tierney made it clear that this sequel is only one development in the ongoing River City Girls brand, and it seems only the sky is the limit for just how big it could all get. “For River City Girls 3, it’s going to be like a dozen characters—we’re getting ourselves in trouble.

Many thanks to Adam Tierney for his time. This is only part of the conversation–to hear the full discussion with WayForward on River City Girls 2 as well as River City Girls Zero, tune in to the NXpress Nintendo Podcast below!

Editor’s note: This interview has been edited for length and clarity.