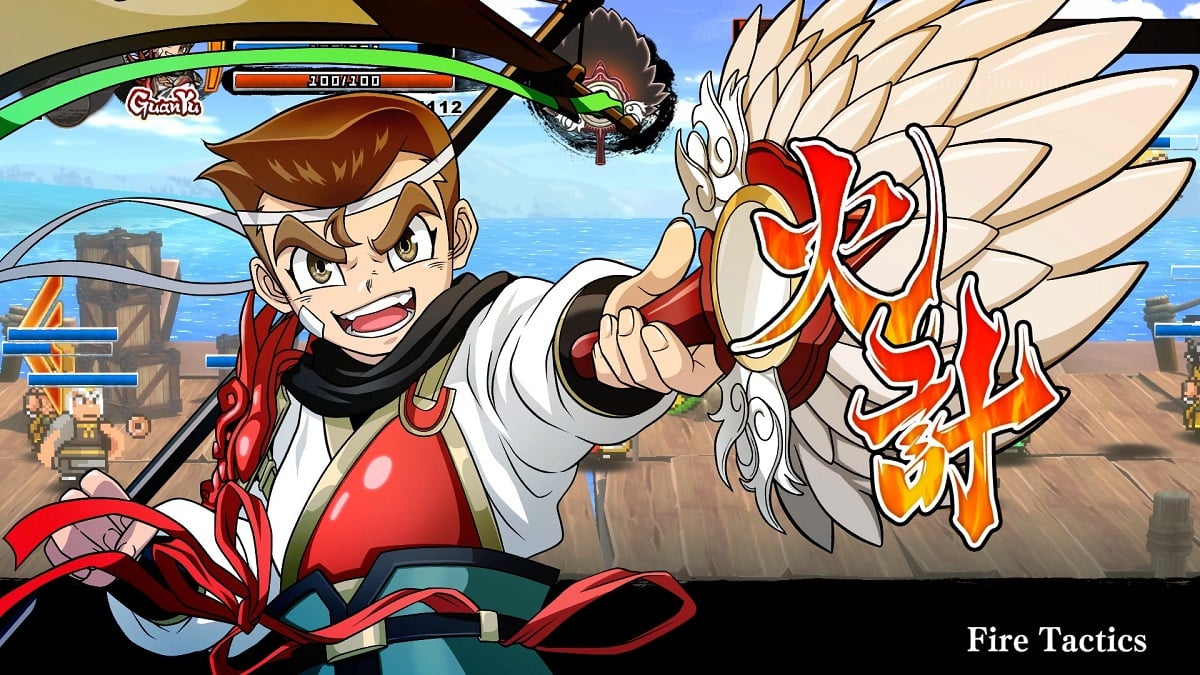 The Kunio-Kun series (known as River City in the West) has been through every incarnation imaginable. From its humble beginnings on the NES chronicling the adventures of delinquent high school boys to the excellent River City Girls that gave Kyoko and Misako a chance to shine last generation, the River City series has been faithfully serving beat ‘em up fans for years. Now, that same series is tackling the famous Romance of the Three Kingdoms story and making it its own. What results is a cheesy but heartfelt beat ‘em up that stumbles just a bit in its execution.

It’s tough not to fall in love with the core cast off the bat. Guan Yu (Kunio), Liu Bei (Gouda), and Zhang Fei (Godai) come together under unlikely circumstances and swear an oath of brotherhood. Though the ceremony is unabashedly silly, it’s still endearing to see the crew go from declaring each other as brothers under a peach tree to making a real-world impact when it comes to bettering their homeland and bringing peace to the nation at large.

Under this premise, the trio travel around to different towns and help citizens with their problems between major story beats involving gangs and corrupt military officers. While the story doesn’t go into the full politics and intricacies of the Romance of the Three Kingdoms story, enough happens from chapter to chapter to see real character growth and get a general idea of the history behind the in-game events.

As far as gameplay goes, River City Saga: Three Kingdoms is a fusion of beat ‘em up combat and RPG elements. Adhering to tradition, movement takes place on both vertical and horizontal planes, which is something that adds a feeling of depth to the world but is sure to frustrate those who may find it difficult to handle incoming attacks from multiple angles. The fighting itself will be familiar to anyone who’s played the series before or even contemporaries like TMNT: Shredder’s Revenge and Streets of Rage 4. While the basic move set consists of punch, kick, and throw buttons, combining them in different ways results in gnarly combos and finishers that look as flashy as they are devastating.

Many of these are locked away behind exorbitantly-priced scrolls sold by dojos, but certain special attacks can be learned naturally through scrolls doled out over the course of the story. There are also super moves and special Tactics (ultimate moves) that can do everything from deal major AOE damage to generate useful items in the nick of time. Needless to say, there’s no lack of combat options here, and your arsenal only grows the further you progress.

For as deep as the fighting is, the RPG elements are what gives River City Saga: Three Kingdoms much of its depth. Defeating enemies outside of towns grants EXP and money, and that EXP is constantly building towards a new level. Every new level grants five ability points, and there are seven different attributes to pour those points into. These range from face-value stats like Punch and Throw damage to more nebulous stats like Luck. There’s no easy mode in Three Kingdoms, but giving players the option to grind and put all their points into Endurance (increased defense and health) early on is a viable substitute for those who find themselves getting floored out of the gate.

Though it’s fun being able to customize Kunio’s core stats and gradually unlock new combos for him to master in story mode, things open up a bit more in a bonus mode called China Heroes where up to four players can choose from a roster of 24 characters and work their way through what’s essentially a horde mode. It’s a shame that none of these are available to play as during the main campaign—even playing as Gouda or Godai would’ve been a nice change of pace—but going a few rounds as Kyoko and Misako was still great fun, and the online connectivity works without issue. Just be sure to play China Heroes after beating the story; not only are certain playable characters locked behind story progress, but there are enemy and minimal plot spoilers as the mode goes on.

For as fleshed out of an experience as Three Kingdoms is overall, the presentation itself if somewhat mixed. On the one hand, the story menus are all richly detailed and well-designed for how much information they have to convey. The 2D art is also strong and does a fantastic job of bringing the characters of Romance of the Three Kingdoms to life in a fun, anime-inspired way. From the visual novel-like cutscenes to special animations for Tactics attacks, the 2D art never fails to be a treat.

Where things are certain to be more divisive are with the normal in-game graphics. The art direction Arc System Works settled on here—a mix of clean but bland backgrounds juxtaposed with simple character sprites—doesn’t look bad per say, but it’s definitely a far cry from the beautiful pixel art found in 2019’s River City Girls. The fact that Three Kingdoms often looks worse than that is honestly shocking (though perhaps it makes sense considering the talent from the first River City Girls is busy working on the upcoming sequel). In any case, the art style here is perfectly serviceable, and fans of the older Kunio-kun titles may even find it endearing. It’s just a shame that Kunio and the rest of the cast couldn’t have been more fully realized outside of the vibrant character art shown during cutscenes.

River City Saga: Three Kingdoms is a love letter to fans of the series. There’s nothing quite like seeing iconic Kunio-Kun characters acting as historical figures with a heavy helping of goofiness to keep things light. There’s also a ton of unlockable art, music, and synopses that explain the classic narrative for newcomers. The combat is solid and bolstered by a plethora of unlockable moves and ultimate skills, and the RPG mechanics introduced are a great way for players to tweak the difficulty in a way that suits their preferred play style. While the in-game visuals are far from impressive, the 2D portraits do enough heavy lifting to make characters shine. Perhaps most importantly, River City Saga: Three Kingdoms feels like a proper adventure with a group of friends who’re just trying to make the world a bit better.