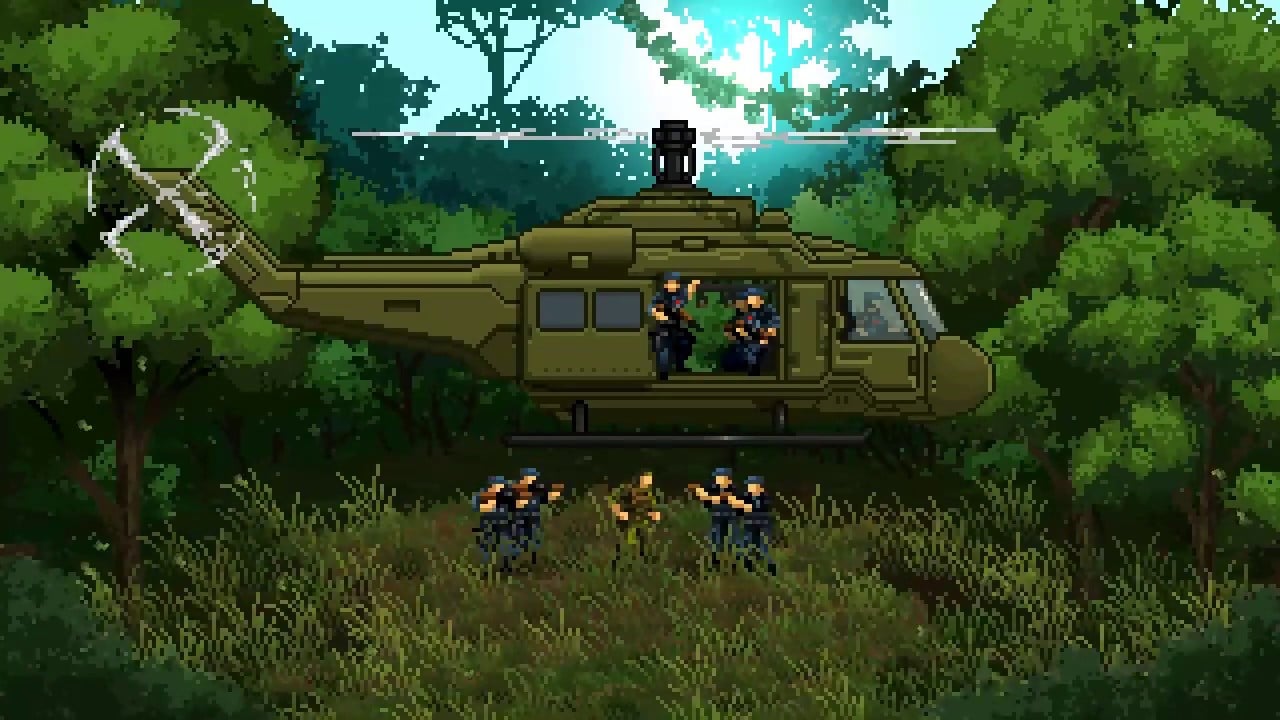 Ever since Metal Gear’s debut on the MSX2 computer in 1987, you would think that dozens of companies would have been hot on Kojima and Konami’s tail to make the best stealth competitor on the market. The genre of military-esque action stealth games has been ruled by the Metal Gear franchise, yet as its modern presence slowly fades amongst rumors of where Konami wishes to takes its digital business and outsourced BluePoint remasters, the demand from the public for another high-quality stealth series remains high. Despite being a parody-styled game, UnMetal is a surprisingly great time that is fueled by the ridiculous aspects of Kojima’s Metal Gear saga and the 80s action movies that inspired it.

UnMetal manages to excellently balance humor and gameplay together for an optimal experience that comes off as less of a fan game and more so a legitimately well-thought-out title. While many critics and players will be quick to compare the game to the first 8-bit Metal Gear title, it definitely falls more in line with its sequel Metal Gear 2: Solid Snake and the 2000 Game Boy Color title Metal Gear Solid — otherwise known as Ghost Babel for those living outside America — that Kojima helped supervise and produce for the handheld. In UnMetal, players slip into the boots of Jessie Fox who is a soldier that was jailed for a crime (he claims) he did not commit. The blunt knockoff focuses on the stealth-action anecdote of an unreliable narrator who absurdly retells his supposed adventures to multiple characters.

Despite its heavy inspiration and clear nods to Kojima’s first breakthrough work, UnMetal does not just rely on the 8-bit foundation that Metal Gear Solid’s two-dimensional entries established. While that familiar top-down stealth on a grid plane is the gameplay focus — and really well recreated and refined at that–, UnMetal does have its own tricks up its sleeve including a combination mechanic and narrative choices that impact environments. As players procure items on-site like the Snakes, they can forge them together to create new objects for both puzzle-solving and fighting. The mechanic is nothing complex and often sticks to the narrative’s favor rather than player creativity, yet the simple addition helps UnMetal stand out in a unique way gameplay-wise from its three big inspirations.

Rather than having the same running speed, punch power, range, and health for the entirety of the mission, UnMetal introduces players to a level system that presents particular power-ups. Players will cautiously be able to decide whether or not they want to cater to a hide and seek experience or unexpected brute force as they slowly turn Jessie Fox into a breed between the two. The one issue with this focus is that UnMetal’s arsenal is left with no room to expand upon itself. Despite having the aforementioned addition of being able to combine items and choose between one or two power-ups after leveling up, there are disappointingly no “weapon upgrades” per se. However, the lack of weapon upgrades is not a big loss as the game actively utilizes its catalog of improvised armament within its environments. Even if specific weapons do not seemingly get enough usage, they are not left in the dust to be wasted inventory space.

The only other real complaint outside of an oddly laid-out room here or there is the petty narrative traps that the game can randomly throw into the mix. Oftentimes UnMetal will give the player various scenario options that can occasionally lead to instant death. While these situations are certainly hilarious the first few times they happen, it can get rather frustrating later on once the “instant death” jokes become recurring gags. Considering how the save system can feel dated in select areas as it pushes players back by quite a number of rooms once they hit a game over screen, it is no surprise why these jokes would eventually become irritating. It should be noted that they are not everywhere, but they can be a hassle to encounter at times as they are just unfair — at least the unobvious decisions to avoid.

The gameplay may be extremely faithful and refined for a Metal Gear-like game, but the best part of UnMetal is undoubtedly its sense of humor. On the surface, a game with its premise would have no right in the public eye to be as well executed in terms of both playing and storytelling as it is. UnMetal is full of one-liners, overdrawn jokes, and short recurring gags that all land in the moment. Nailing humor is difficult but the game for the most part is guaranteed to make players laugh — you can’t help but smirk at even the dumbest jokes the game has to offer. The dialogue options also quite honestly make you want to purposely fail quickly so you can see what the other options may have presented. Even though those “instant death” traps are annoying, it is hard to not want to see what dialogue alternate decisions may hold.

From a critical perspective, UnMetal certainly would not even scratch the surface of being a narrative replacement for other major name stealth franchises, however, for a parody it excellently does its job by presenting hysterical stereotypes and archetypes from its genre. Jessie Fox alone is what people who have not played a single Metal Gear Solid game probably think Solid Snake and Big Boss are like as he ironically manages to capture the gritty yet excessive personality of Kojima’s beloved soldiers. Sure the thoughtful political issues and human reliability have been drained from Fox himself, but considering comedy is the game’s focus it is absolutely okay. The goofy cast and insanity of UnMetal’s world is an abridged take on Metal Gear’s world gone right.

In a time where dedicated stealth games have started to become missing in action, UnMetal is a comedic take on the genre’s most iconic top-down title done right. UnMetal offers a solid refinement and recreation of the underrated 8-bit Metal Gear games that predated the franchise’s pinnacle work. It is a parody that presents something even Hideo Kojima himself would probably find rather amusing. It may not be the serious action-packed replacement for Metal Gear Solid every fan wants, but considering its aspirations and soul-focus, UnMetal is no doubt worth your while. For anyone looking for a title that is even remotely close to Kojima’s original vision of Solid Snake’s world, you absolutely can not go wrong with UnMetal.