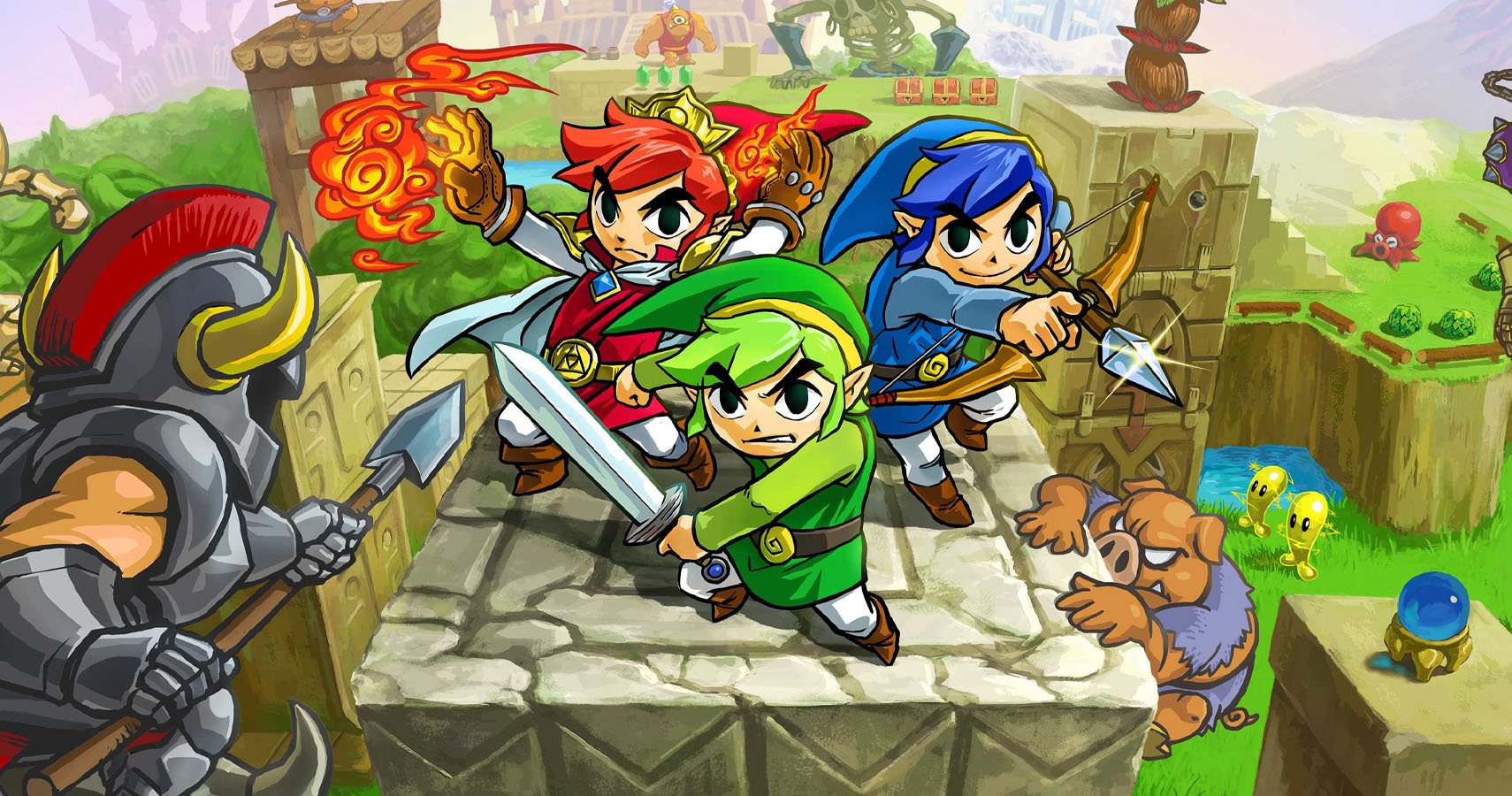 The Legend of Zelda has a strong track record when it comes to direct sequels. Zelda II is a unique follow-up that also happens to be one of the best action RPGs on the NES, Link’s Awakening is just as foundational as A Link to the Past in the grand scheme of things, Majora’s Mask rounds out Ocarina of Time’s design philosophy without being derivative, and Spirit Tracks puts a fresher spin on concepts pioneered by Phantom Hourglass. The average Zelda sequel is unique, creative, and emblematic of everything that makes the franchise so engrossing. Then there’s Tri Force Heroes.

A spiritual successor to the Four Swords games, Tri Force Heroes is the third multiplayer Zelda. While there’s over a decade of time between Four Swords Adventures and TFH releases, Nintendo staff members had been wanting to make a third Four Swords for years. Phantom Hourglass started life as Four Swords Adventures on dual screens before series producer Eiji Aonuma redirected the staff towards developing a game that made better use of the DS’ hardware. Before A Link Between Worlds was settled on as a distant sequel to A Link to the Past, executive producer Shigeru Miyamoto was presented with a Zelda game based around the “theme of communication.” In response, Miyamoto criticized the idea for sounding “20 years old.”

Shigeru Miyamoto’s comment, in particular, is an outright condemnation of the whole concept of multiplayer Zelda. It had been done twice before to mixed results both times. Four Swords as a creative well was dry, but the advent of online multiplayer led to Nintendo revisiting the idea once more. A Link Between Worlds would be followed up not with a sequel that embodied its design philosophies, but a multiplayer Zelda Aonuma had to remind the dev team to create a single-player mode for. Despite sharing a director, Tri Force Heroes is nothing like the legendary game it builds off of.

For all their flaws, Four Swords Anniversary Edition and Four Swords Adventures had their campaigns revamped in subtle but substantial ways to accommodate anyone who was playing alone. FSAE allows you to control two Links at once while FSA features the Formation system so players can rearrange all four of their Links on the fly. Puzzles are also slightly altered across both games, downplaying the need to be in two places at the same time. Tri Force Heroes makes no such distinction, featuring the exact same level design between single- and multiplayer.

This naturally causes more than a few puzzles to come off downright frustrating when alone, especially in conjunction with TFH’s Doppel system. Instead of controlling four Links at once (all of which innately follow the player), Tri Force Heroes trims Link’s party down to three while removing inactive Links’ ability to move. You can only move one Link at a time, rendering both others completely immobile. This is another clear problem, especially since gameplay is designed with three players actively working together. Making it so players can only control each Link individually when playing alone without changing the level design is an oversight unlike anything the franchise has seen.

Rounding out the Doppel system is the Totem mechanic. Since Doppels don’t move, you physically need to pick each one up to move them. All three Links can be stacked together, allowing them to move in conjunction. Any items used in the Totem fire from whichever Link is stationed at the top. Several puzzles in the game play off Totems, with a few bosses even changing their weak point’s positioning during the course of the fight. Unfortunately, Tri Force Heroes’ hardest Totem puzzles are often timed. The amount of finesse and planning needed to get through single player is downright irritating at times and genuinely feels unfair.

The Secret Fortress features a set-piece where you need to create three pillars with the Water Rod, grab a bomb, and then run to the furthest pillar to throw said bomb onto a ledge before the pillar dissipates. Another live Link could create a water bridge while you walk across with the bomb. Alone, you need to make sure your timing is airtight. Palace Noir similarly features a section where you need to quickly light a torch with the Fire Gloves and then shoot through it with an arrow – a completely reasonable task in multiplayer that’s a brain teaser on your own.

Bosses like Stalchampion don’t make things easy on single players either. Not only do most bosses have a high health pool (on account of the three Links), their attack patterns are designed around players positioning themselves to strike within the correct time frame. Some bosses are easier about this than others & can be brute-forced, but enemies like Stalchampion and Blizzagia demand timing with three human beings in mind. You can technically complete everything in Tri Force Heroes alone, but that doesn’t mean the game is balanced accordingly. Or even at all.

Bafflingly, Tri Force Heroes’ single-player manages to mess up the one thing the game undeniably has over Four Swords and Four Swords Adventures: actual progression. While there aren’t Heart Pieces or equipment to collect, Link can custom order outfits with materials he can buy in town or find through gameplay. Every outfit has its own unique attribute that slightly alters gameplay. The Legendary Dress causes Hearts to spawn more often, the Sword Suit gives Link access to his Sword Beam, and the Timeless Tunic makes the music chiptune. Each Link gets to pick an outfit in multiplayer – leading to greater gameplay variety – but not in single player.

When playing alone, you only get to pick an outfit for the default Link. It can be argued that this is done so as not to give the player too many advantages, but Tri Force Heroes’ horrid difficulty curve would only have benefitted from this. There are so many outfits in the game and little incentive for someone to unlock them all by themselves. Allowing audiences to customize all three Links would not only have helped mitigate inherent design issues with leaving gameplay untouched between single-player & multiplayer, but it would have also simply made the campaign more enjoyable.

Worse than the Doppels, untouched level design, and timed puzzles that run on players’ patience instead of a clock, Tri Force Heroes’ greatest flaw during single player is the Energy Meter. Introduced in A Link Between Worlds, the Energy Meter replaced Magic, Stamina, and ammo in order to encourage frequent item use. Shooting an Arrow, casting the Ice Rod, or dropping a Bomb all take a chunk out of the Energy Meter, but the bar recharges gradually and automatically. Since the Energy meter briefly locks when fully drained, however, players are discouraged from spamming their attacks. Enemies are more aggressive to accommodate the lack of resource management, but not to the point where draining Energy through combat is a constant occurrence.

Not so in Tri Force Heroes, whose enemies are far more aggressive than in A Link Between Worlds. Since stages are designed with a trio in mind, there is always three players’ worth of enemies at any given time. An empty Energy meter isn’t just common, it’s constant. Between constantly needing to solve puzzles and face off against enemies, the Energy Meter is always dropping. Even worse is if you’re in the process of figuring out a puzzle alone. Waiting for Energy to drain just so you can try to solve a puzzle defeats the entire purpose of including such a mechanic. Energy was designed to make gameplay in A Link Between Worlds more convenient. In Tri Force Heroes, it’s just a roadblock.

Worth pointing out is also Tri Force Heroes’ relationship with A Link Between Worlds. Although the former used Toon Link’s design for the main character, the game was envisioned with the latter’s direct art style. It was only by Aonuma’s suggestion that the visuals were changed to match The Wind Waker (making TFH the seventh game in the franchise to use the Toon visuals). Despite this, Nintendo has held firm that Tri Force Heroes is a direct sequel to A Link Between Worlds – a disappointment in and of itself. The two games have little in common as far as game design goes, and even less narratively.

A Link Between Worlds expanded the franchise’s lore with the introduction of Lorule and by using Hilda, Ravio, & Yuga to comment on the main trio of Zelda, Link, & Ganon respectively. The prologue’s almost utopian tone clashes heavily with the dystopian Lorule, allowing the story to balance levity with genuine stakes. Tri Force Heroes presents itself as a Legend of Zelda parody. Princess Styla isn’t kidnapped, she’s just been forced to wear an ugly bodysuit. Lady Maud’s “evil” amounts to having bad fashion sense and she genuinely believes she has Styla’s best interests at heart. Hytopia’s tone is light, whimsical, and eager to poke fun at the series.

Tri Force Heroes might be reminiscent of Link’s Awakening in that regard, but the latter understood that it was still a Zelda game and carried plenty of heart accordingly. TFH’s script prioritizes humor above all else, but most of the jokes amount to characters regurgitating their one trait ad nauseum. Styla is extremely shy & afraid of Link, King Tuft is a blubbering buffoon, and Lady Maud’s entire personality revolves around fashion. The story is in no way the focus here, but even what few cutscenes there are do little to justify their existence. Neither Four Swords nor Four Swords Adventures has strong narratives, but they at least care about resembling the franchise they’re a part of.

Hytopia isn’t a grand kingdom full of rich world-building. Most NPCs are bland, uninteresting, and wear out their welcome fast. The fragmented level design removes exploration altogether (straying from one of A Link Between Worlds’ strongest qualities) and a completely untouched campaign between single-player & multiplayer-only serves to hurt those who will be playing alone. Tri Force Heroes doesn’t feel or play like The Legend of Zelda, but an idea that’s 20 years old. Nintendo kept second-guessing multiplayer Zelda for a reason and you only need to look at Tri Force Heroes to understand why.