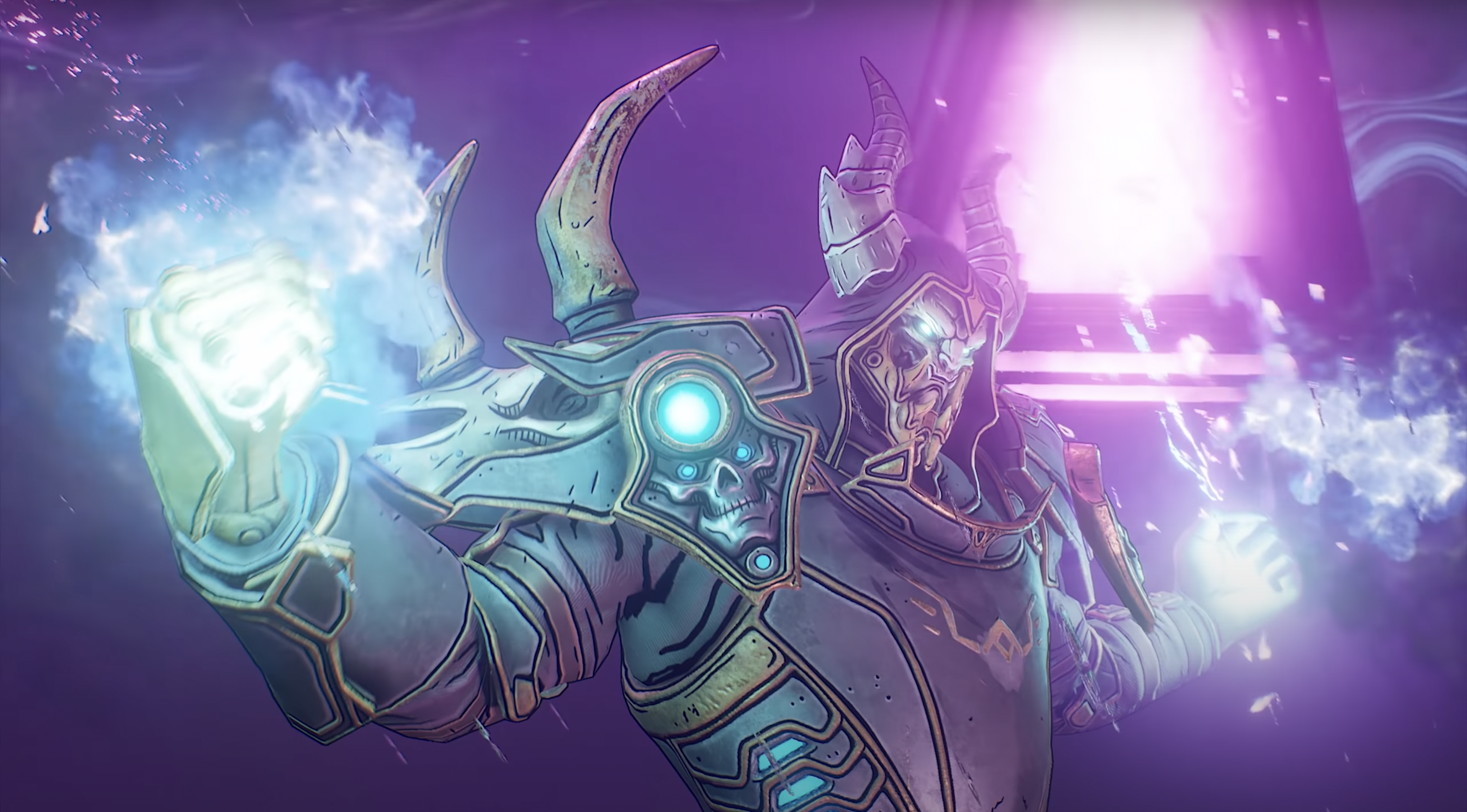 Tiny Tina’s Wonderlands is one of the most interesting games of 2022 so far because of its dedication to telling a fantasy story that is simultaneously predictable and surprising. While the events of the final act feel like the natural conclusion of this type of story, it is told in a way that gives considerable development to the main cast and answers a number of interesting and unexpected questions. So who is the villainous Dragon Lord exactly, and why is he evil? This is the ending of Tiny Tina’s Wonderlands explained!

At the end of the penultimate main story mission “Soul Purpose”, after having fought through Ossu-Gol Necropolis and defeated the Knight Mare boss, the first major plot twist of Wonderlands’ final act is revealed. The Dragon Lord is in fact Tiny Tina’s first-ever Bunkers and Badasses protagonist, known back then as the Dragon Knight who was meant to be the greatest hero of all time, and Tiny explains this to the mysterious Notetaker who is playing the game with her in a flashback scene. Tina and her Dragon Knight go on many adventures together in that first campaign before reaching a critical moment in the story where the Notetaker asks Tina what her character wishes to do with the legendary Sword of Souls that grants its user miraculous powers.

Tina, wishing to make her Dragon Knight the ultimate hero, instructs her character to use the Sword of Souls to instantly blow up all evil in the world. The Notetaker informs Tina that this results in the deaths of thousands of people, thereby making the Dragon Knight a force of evil and not good. Tina’s outrage at this reveal causes her to leave the Notetaker’s campaign, and the Dragon Lord who is narrating the flashback scene in the present reveals that he has been the villain in Tina’s Bunkers and Badasses campaigns ever since. In his own words: “I’m not evil. She just writes me this way.”

The reason why Dragon Lord is always used as the villain in each of her subsequent Bunkers and Badasses adventures is that Tina, in her rage at the first campaign, says she wants to be the new Bunker Master and create a world where only heroes win. The Dragon Knight, now evolved into the evil Dragon Lord, was the perfect template for a villain that can be destroyed by the new heroes—the new Fatemakers—of Tiny Tina’s Wonderlands. The Dragon Lord, however, appears to have gained some kind of sentience in her world and wishes to break free from the endless cycle of being the villain in every story. The final mission is therefore aptly titled “Fatebreaker”.

After fighting your way through the Dragon Lord’s Fearamid and reaching the very top, the final battle begins. Interrupting Tina’s attempt to introduce him, the mighty Dragon Lord makes his own introduction and uses every power available to him to try and destroy the Fatemaker protagonist. During the Fearamid ascent, Dragon Lord attempts to persuade the protagonist to join his side, but having failed these negotiations the only path left is battle. Every step of the finale is exactly as Tina had hoped, with the Fatemaker poised to deal the final blow as the Dragon Lord submits in his last moments. Our hero, however, makes a critical choice to break the chains of fate altogether.

Choosing to spare the Dragon Lord may seem anticlimactic to the traditional fantasy story, but in this case, it is exactly what this story needed to reach its proper conclusion. In all of Tina’s Bunkers and Badasses stories, the heroes destroy the evil Dragon Lord, fulfilling her fantasy of creating a world where only heroes can win. But the truth is this only perpetuates the very cycle that Dragon Lord wishes to escape. He is not interested in being evil for the sake of it. He wishes to make his own decisions, divorced from the personality that Tina forces him to adopt in each of her stories. Throughout the “Fatebreaker” mission, Tina begins inventing backstories for the villain that aren’t even true. Dragon Lord has never had the opportunity to live the way he wants to—until now.

Using the miraculous power of the Sword of Souls to resurrect Queen Butt Stallion in all her glory, peace is restored and everyone returns home to Brighthoof. The Dragon Lord’s punishment for his evil is to be confined in the Chamber of Chaos in the Queen’s castle, becoming the NPC that aids the player with the game’s post-story content. This strikes a good balance between not letting the villain get away with his actions without consequence, while simultaneously acknowledging him as a redeemable character whose heart is now in a better place and thus deserving of a second chance at life. The most important thing is that the cycle of villainy is broken—with the Dragon Lord alive and well there is no need for further evil reincarnations of the character.

There is still one more thing to talk about, and anyone who has knowledge of the Borderlands games or more importantly has played Tiny Tina’s Assault on Dragon Keep will likely have struggled to hold back tears following the defeat of the Dragon Lord. As the player picks up their congratulatory loot, another flashback sequence, this time audio-only, plays in the background. It’s a conversation between the Notetaker and Tiny Tina, whereby the Notetaker says he is sorry and hopes that he hasn’t ruined Bunkers and Badasses for Tina by turning her first character evil. Tina accepts the apology and hopes that the Notetaker will come along to her own campaign that she’s hosting in the near future.

Though it is never explicitly stated, the Notetaker’s own words are more than enough evidence of who he truly is—or in this case, was. In response to Tina’s proposal, he says he can’t at this moment in time because “being the leader of an army is more work than I thought”. This, combined with the voice actor’s name in the credits, all but confirms that the Notetaker is Roland from Borderlands 2, making this entire conversation that much more emotional. Roland’s tragic death in Borderlands 2 set the stage for the plot of Assault on Dragon Keep, being a highly emotionally-charged exploration of what happens when a young vulnerable teenager has to deal with a terrible unexpected loss.

Not only does this reveal change the way the final conversation feels, but it also recontextualizes various moments in the final act. Most notably, we learn that the Notetaker, now Roland, was the one who first introduced Tina to Bunkers and Badasses in the first place. There’s also an implication, albeit a less obvious one, that the campaign Tina is referring to is the Assault on Dragon Keep campaign, meaning that she had invited Roland to participate shortly before he died and thus was never able to attend. This is a soul-destroying twist that makes the events of Assault on Dragon Keep even more upsetting, and as Wonderlands’ final plot twist it couldn’t have been more of an emotional gut-punch.