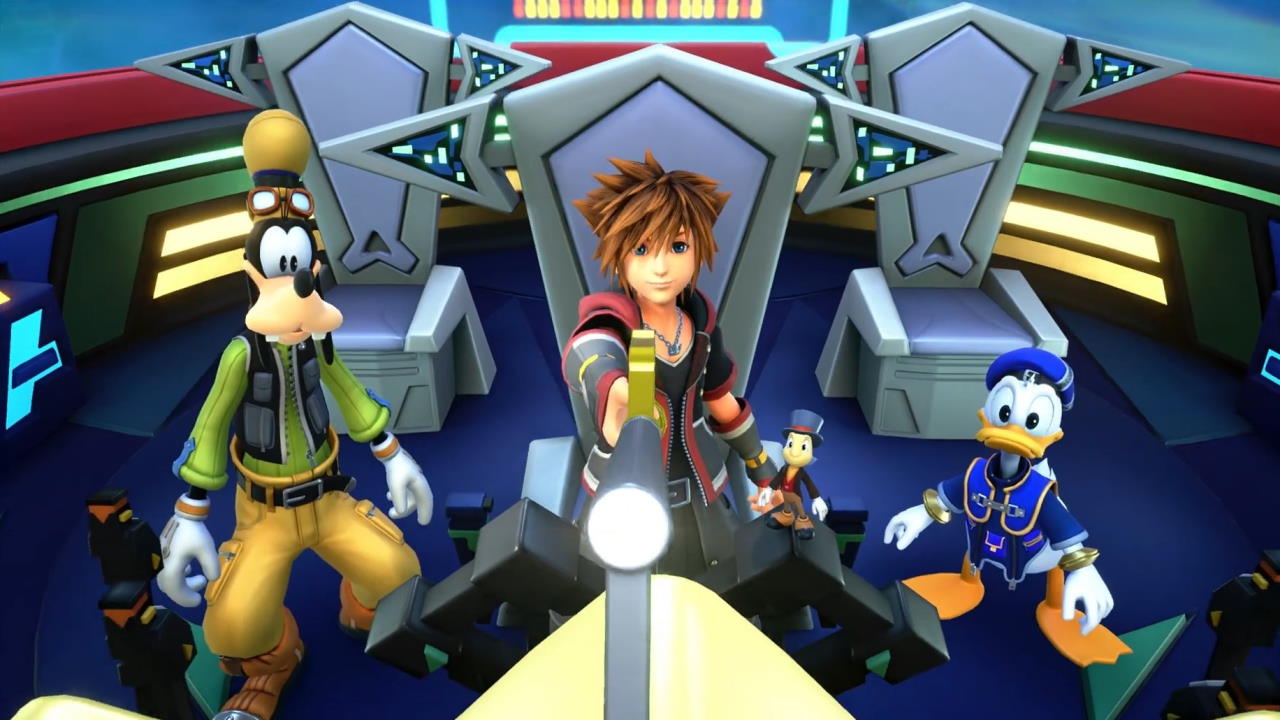 An old adage says that the Disney worlds in Kingdom Hearts are useless. As truisms often are, this too is largely false, though it does have an ingot of truth. And even if some of the worlds we want to see in the next Kingdom Hearts originated in the series, most still come from the Disney catalogue.

Even if they form the backbone of each game, the role of the worlds is hard to see from a distance. Looking at one game at a time, it becomes clear that each of those locations, with its troubles and its characters, is a microcosm of the larger plot. The worlds, be they original or based on Disney movies, are essential to the classic Kingdom Hearts formula.

To celebrate the announcement of the next game in the series, then, let’s look at the worlds we want to see in Kingdom Hearts 4.

It’s inevitable: most worlds in Kingdom Hearts 4 will be grandfathered in from their predecessors. More than just inevitable, for many of those worlds this exciting! It can be the opportunity to give some old, important locations a make-over, or to show how they changed in all those years.

Though there are too many to choose, here are some of the old worlds we want to see in Kingdom Hearts 4.

The Twilight Town we see in Kingdom Hearts 3 is simply too short. It’s not quite empty, as it holds a lot of story and lore, but it just isn’t fleshed out enough. Compared to what we saw in the Kingdom Hearts 2, this new version is clearly sub-par. And parts of it, like the crawl through Naminé’s mansion, seem to have been cut at the last minute.

Twilight Town is so important to long-time fans of the series that we’re sure to see more in the future. Let’s just hope that it will be something more substantial, this time around.

I know this one is strange but hear me out. When we visited this world in Dream Drop Distance we only really saw the Sorcerer’s story. And even then, it was only Mickey’s side. On one end, there is still plenty of material for exploring Yen Sid’s story and his origins (which, as Melody of Memory suggests, might be very important).

We never got to play through The Realm of Darkness outside of Birth by Sleep: a Fragmentary Passage. This is the most linear game in the whole series, which is to say we didn’t see a lot of this place. But this is where all of the worlds engulfed by darkness end up! The possibilities are truly endless!

Like with the stained-glass staircase from Kingdom Hearts 1, or the Final World of the newest entry, this series shines brighter once it becomes a bit absurd. Those are some of the most striking imagery of the entire series, and the Realm of Darkness fits that aesthetic perfectly.

Just like the Realm of Darkness, the version of Radiant Garden we saw in Birth by Sleep is short and linear. We’d love to see the new Radiant Garden get a similar treatment to Hollow Bastion in Kingdom Hearts 2. After all, the two are effectively the same location, as one morphed into the other.

Making this an explorable world means feeling first-hand just how the Kingdom Hearts universe can change. There’s a great disconnect, going from the grey alleys and brown houses of Hollow Bastion to the bright, cheerful colors of Radiant Garden. This might just be the transformation that the series needs, now that it’s getting into a new trilogy.

Toy Story’s world might very well come back in Kingdom Hearts 4, and we’re all here for it. The toys’ world fits into the cartoony looks of Kingdom Hearts way better than the abomination that is the Pirates of the Caribbean, with its mutant-looking pirate Goofy. The Toy Story series usually has lower stakes, too. This helps the silly threat of the Heartless seem a bit more reasonable.

But what The Toybox really has is potential. This is where we saw the fake in-game trailer for “Vexen Rex”, which later turned out to be extremely important for the future of the series. It’s also a world where toys are characters, which is a gimmick almost tailor-made for Kingdom Hearts.

Of course, no one is buying a next-gen title just to relive the same old worlds they saw before. There’s also far more on the table now, especially after Disney’s buying spree of the last few years. Between their animation studios, the entire Marvel cinematic universe, and 20th Century Studios (that means Fox), we got stuff for days.

If you never thought there would be an advantage to the entire entertainment industry being controlled by just 3 companies, then good news. You’re right. But keeping the upsides in mind helps you sleep at night: here are 5 brand new worlds we want to see in Kingdom Hearts 4.

If we don’t see the return of The Toybox to Kingdom Hearts 4, let’s hope it’s because all that energy went into Buzz Lightyears’ own world. Based on the recent Lightyear movie, a space opera that still operates within Toy Story’s fantasy logic is a perfect fit for Kingdom Hearts. But what we really want to see is if (and how) the Lightyear world will play with the existing Toy Story world, the Toybox.

Lightyear might even be an in-universe fictional movie, like Verum Rex. It could signal that there’s more to the “un-reality” that a fake videogame and the city of Quadrarum.  If none of this makes sense to you, we have a handy guide to the entire Kingdom Hearts storyline. Even if all this speculation is for nothing, we still want to see what Buzz’s space adventure can bring to the series.

If there’s anything we want to see more of in Kingdom Hearts, it sure isn’t water levels. But a Finding Nemo world could just hold what we need to make the ocean’s depths tolerable, and maybe even fun. Also, swimming mechanics got way better since 2005.

But there are a couple of other tricks hidden in Nemo’s ocean. First, there are no musical numbers in Finding Nemo (this is very important). Second, if we add Finding Dory to the mix, we have 3 perfectly fine levels already designed: the ocean, the dentist’s studio, and the zoo. Third, water in video games looks beautiful now! Have you seen Sea of Thieves? It looks so good!

There’s a theory about Kingdom Hearts 4 that’s doing the rounds on the internet. It says that the weird metallic shape in the background of a lush forest is actually the leg of an AT-ST. The two-legged war machine from Star Wars does in fact match that shape really well. The forest even matches that of Tatooine’s Moon, where the AT-STs play a big role.

We’d all like it to be true, don’t lie. We all thought about a lightsaber Keyblade, a weapon to unite the impractical and the impossible. We all dreamed of that scene where Han Solo shoots Pete in the head.

But this isn’t about us. What’s important is that Kingdom Hearts needs some new princesses! Don’t you want to see a human-like Leila meeting her fellow princesses of heart? Bowing down and looking Kairi straight in her dead, anime eyes? I think I can speak for everyone when I say, that’s what I got into Kingdom Hearts, to begin with.

We could do with a better name, sure. But, while this working title isn’t as whimsical as others in the series, it speaks about the sincerity of this movie. Brave is a simple story, reminiscent of traditional fairy tales and earlier Disney movies. For this alone, it would feel right at home in the Kingdom Hearts series. But there’s more.

This world has the potential for vibrant colors and large, open environments, to take full advantage of the PS5 hardware. It also has a distinct style of clothes and music, of a kind completely new to the series. There’s also the fact that Merida is a Disney princess, and if we want to get rid of the old worlds, we’re going to need some new princesses.

Just like The Toybox, an arcade is an endless source of activities and an easy way to connect different areas of the same worlds. What’s more, considering Square-Enix’s extensive catalogue, those areas could be based on actual arcade games. Licensing issues might make this hard, though, but the possibilities are so tantalizing to make it very interesting regardless.

Wreck-It Ralph isn’t really a new addition to the series: its world is actually quite important to Kingdom Hearts: Union X. But Union X is by far the least popular Kingdom Hearts game. This means that not only will this world be functionally new to most, but it will also be a refinement of something that already existed. Oh, and it won’t be tied to a gatcha mobile game this time. That’s always a plus.

We’re breaking out of our format here to bring an important message to Square-Enix. We’ve done Hercules already. We’ve gone through any possible Hercules world, even getting a whole tour of the country in Kingdom Hearts 3. We don’t want to see the training grounds, or the pottery shop, or the sundial guy’s alley.

We don’t need to see Phil’s unflinching stare again as he flings his arms around, trying to emote silently, all because DeVito is too expensive to hire these days. We’ve done it all before. Sora’s already a hero, we don’t need Hercules’ song to remind ourselves.

Of course, we already saw Goofy and Donald visit Hades’ Underworld in the Kingdom Hearts 4 trailer. But that doesn’t mean we have to go there too, right? Right?