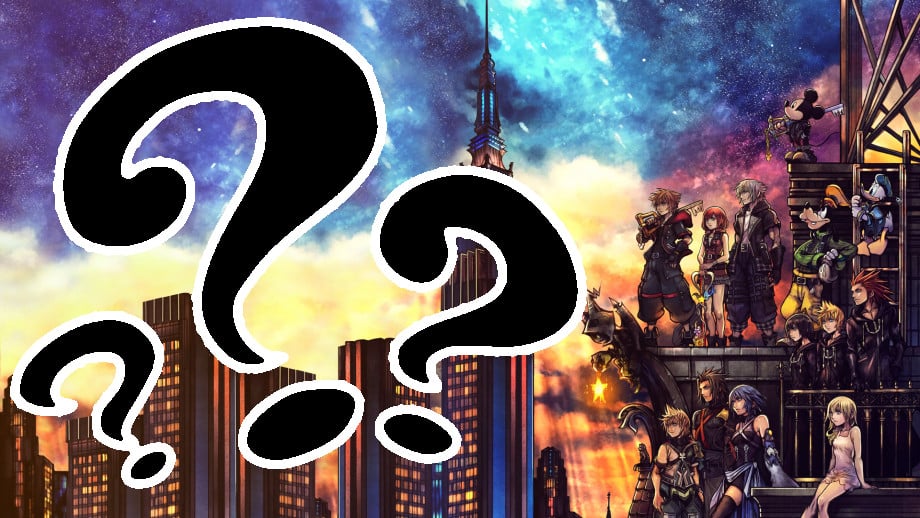 Kingdom Hearts III leaves us with many questions…

If it wasn’t obvious from the headline, this article contains heavy spoilers for Kingdom Hearts III.

Kingdom Hearts III brings an end to the Xehanort Saga, or “Dark Seeker Saga”, which has been the crux of the series’s story ever since its conception back in 2002. That doesn’t mark the end of the franchise that has spawned more conspiracy theorists than the moon landing, though, not by a long shot. The ending is ripe with unanswered questions, and we’re going to attempt to compile them together here in an attempt to grasp the direction this heartfelt series is heading towards in the future.

(We will not be addressing the secret movie in detail in this article as that is its own rabbit hole to go down.)

What’s in the Box?

Let’s get the elephant in the room out of the way first, shall we? The black box is a constant presence throughout the entirety of the Kingdom Hearts III campaign and is arguably the most important plot point. This is a large box given to Luxu by the Master of Masters (more on him later) during the events of the browser and mobile game Kingdom Hearts χ; they are presumed to be the only two characters in the universe that know its contents.

Very little is known about the black box beyond its appearance and the fact it should never be opened. Maleficent and Pete are shown searching for the box in various worlds and even make an appearance in the epilogue that revealed it. The Organization was also searching for it with Luxord spearheading the effort but even he admitted he didn’t know what for. He did give us our one solid clue as to its contents, however — “hope” — the meaning of which can be interpreted in any number of ways.

It’s made extremely clear that whatever new conflict brews in the future for Kingdom Hearts will likely revolve around this enigmatic container.

Who, or what, is the Master of Masters?

In what would be perceived as an out-of-season April Fool’s joke for any other franchise, Nomura hid some of the most important plot details for the Kingdom Hearts world within a friggin’ browser and mobile game, of all things. Next to “the Box” in the ranking of ominous foreshadowing is The Master of Masters, a hooded figure who foresaw the first Keyblade War and the worlds’ fall into darkness.

His cavalier attitude and all-around likable personality made him stand out in the Back Cover movie that came with the Kingdom Hearts 2.8 collection, but that also makes him the hardest character to get a read on. What exactly are his intentions, his true goals? All we know is that he gave Luxu a keyblade made from his all-seeing eye in order to see the future, as well as the mysterious Box, before seeming to disappear from existence.

It’s possible the hooded figure at the end of the secret movie is The Master of Masters making his grand return. It makes sense with Xehanort’s time in the limelight over, The Master of Masters could very well fill in the antagonist role for the series going forward. If so, he has the potential to be a far more dangerous foe than Xehanort ever hoped to be on the sheer principle of his unpredictability.

The purpose of Organization members 9-12?

Demyx, Luxord, Marluxia, and Larxene — these are the ninth through twelfth members of the organization, respectively. Members one through six were the original apprentices of Ansem the Wise while seven and eight (Saïx and Axel) joined for their own reasons revealed later. So who are these four and why were they recruited/did they join in the first place?

During an intermittent scene after the Arendelle world, Xemnas reveals to the four their role has to do with the “ancient Keyblade legacy that slumbers within” them. Exactly what that legacy is, though, never comes to light. One hypothesis is that they were the four Union leaders of Kingdom Hearts Unchained χ. While there is plausible evidence this is the case for Marluxia in both appearance, name, and parting words, the other three are a mystery.

That’s not the only secret these members hold, however, especially in Luxord and Larxene’s cases. After Sora’s final showdown with him in the Keyblade Graveyard, Luxord leaves him a parting gift, a “wild card” he called it. The nature of this trump card is still unknown. It’s not the card Mickey was trapped in as we saw him released from a different one right after.

Meanwhile, Larxene left some choice parting words for Sora in terms of her own motivations for joining the Organization, claiming she was “just along for the ride.” Who she was riding with was a secret she took to the grave.

Who is the girl Ansem the Wise experimented on?

Speaking of motivations, we have Axel and Saïx’s reasons for joining the Organization originally. Before the final showdown at the Keyblade Graveyard, Saïx makes a surprise visit to his old friend. They reminisce about how and why they got tangled up in this mess to begin with. The reason: an unnamed girl.

She was experimented on by Ansem the Wise but for exactly what purpose remains unknown. She supposedly disappeared one day without a trace and even with all the resources as the Organization’s second-in-command, Saïx was unable to pick up a trail.

Ansem the Wise himself also expresses his desire to atone for the atrocities he committed to the girl, as well as Roxas and Naminé. The girl’s disappearance was apparently the impetus that made Ansem the Wise halt his research, so whatever happened was serious indeed. Heartless Ansem (here we go with the names) says the girl’s memories contain the key to unraveling the mystery of the struggle between light and darkness, although Ansem the Wise denies this.

The girl’s physical appearance is never once described in any interaction, leaving clues towards her identity and whereabouts scarce. The post-game secret reports, however, heavily imply that the girl is Ava, one of the original five Foretellers that apprenticed under the Master of Masters. She was taken from custody by Xigbar, now known to be Luxu. Where to is still unknown. Her importance to the underlying conflict, unbeknownst to Sora and the others, is made abundantly clear, though, and will likely play a critical role in the story going forward after Kingdom Hearts III.

Who is the star in The Last World?

When Sora is nearly defeated in both body and heart in the Keyblade Graveyard (because this series refuses to use the word “killed”) he ends up in The Last World where he needs to, literally, piece himself back together. While there you can talk to a number of shining stars who are unfortunate souls whose lives were cut short. A couple of the stars trigger missable cutscenes, though. One is Naminé, but the other goes unnamed, saying that her name was taken away from her.

The nameless star simply says that “somebody” did this to her and that she is waiting for “somebody” to come get her. Evidence suggests that this star is potentially the lost girl, most likely Ava, from Ansem the Wise’s lab, who Xigbar stole away with. It would certainly answer why no one has been able to find her as The Last World isn’t a place meant for the living.

The cutscene ends with the star whispering to Sora who she is waiting for, unheard to the player’s ears. Sora shows a look of moderate shock, implying he knows this person, but the reaction isn’t big enough to imply that she said Xigbar as his surprise would have likely been much more exaggerated in such a case. At this stage, it’s difficult to tell just who the star is waiting for, even if we assume she is Ava.

What did Young Xehanort’s last words mean? What happened to Sora in the end?

Kingdom Hearts III runs the gamut in terms of last words, like those we just discussed for Luxord and co. Young Xehanort’s lines take the award for most ominous by a mile, though, saying that Sora is “done now,” his “journey ends here,” and implying his time in the world is over before being abruptly cut off.

There is a gravitas to his words that makes it clear they are not the whining of a sore loser. This is corroborated by the Lich’s appearance in The Last World which was supposedly dragging Sora’s heart down to the deepest parts of the abyss.

Young Xehanort says that Sora is misusing the Power of Waking and that there is a “high price to pay” for doing so. This is implied to manifest in his disappearance at the end of the game, but that seems more of a result of him going after Kairi’s lost heart than his actions up to that point.

Even if that is the case, the circumstances of Sora’s disappearance remain unknown. In a series where characters that should by all intents and purposes be dead can be brought back to life seemingly on a whim, the consequences of Sora’s actions have to be something even direr. Those dire consequences almost assuredly have to do with Sora’s awakening in Shibuya during the secret movie, but that is a can of worms we’re not going to open any further for this article.

So that’s all of the big questions we can pick out from Kingdom Hearts III. Do you have any ideas or theories to the answer of some of them? Are there even more questions we missed (there most certainly are)?