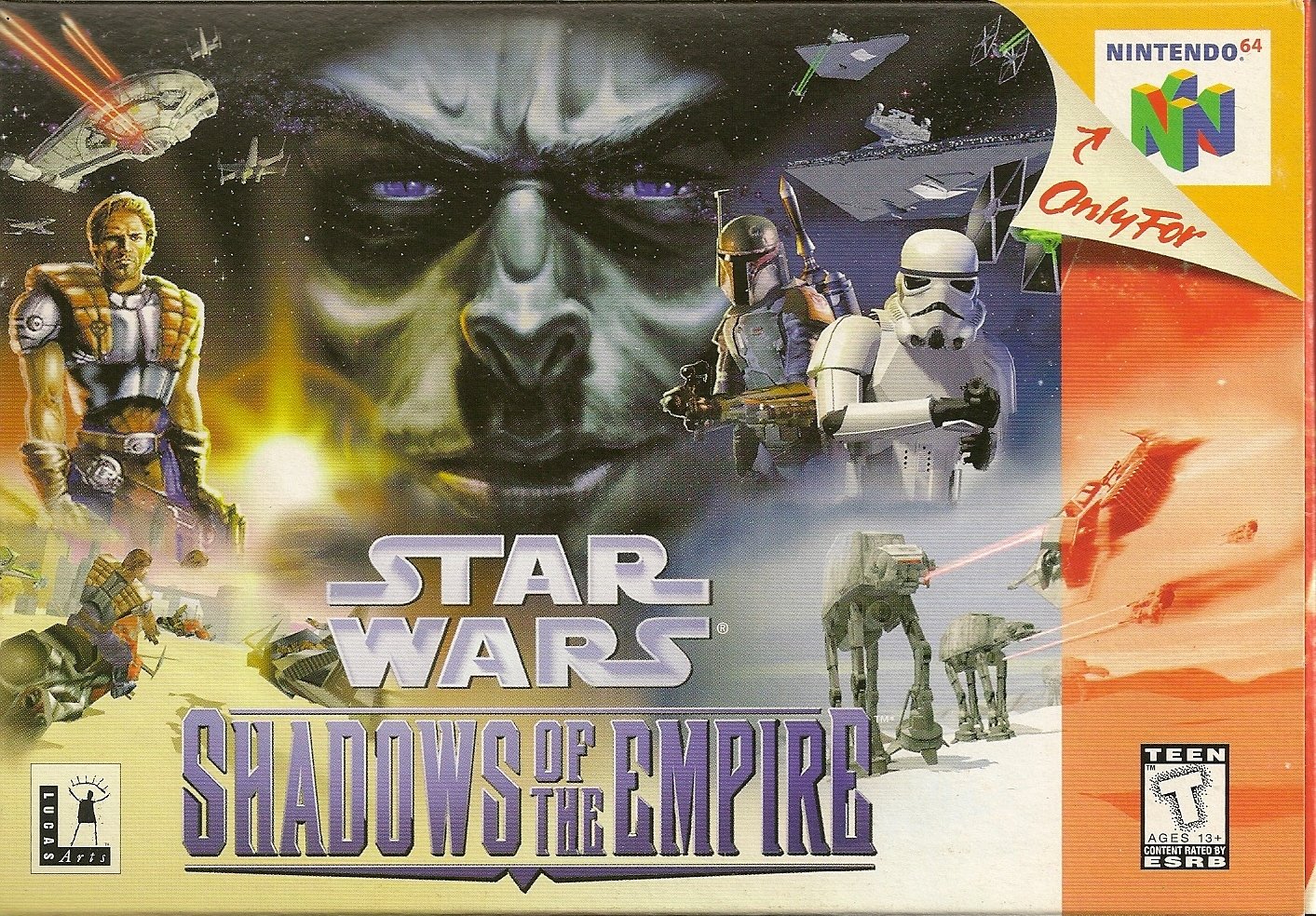 By the time the N64 came around, interest in the Star Wars franchise on video game platforms was at a high level. If the Super Star Wars series had whetted gamer’s appetites, then the Rebel Assault and Dark Forces games started to expand the universe, telling their own stories and incited a craving for even more exploration. On the gameplay side, both X-Wing and TIE Fighter upped the ante for vehicle-based combat. Yes, many of these titles were too tough for some (including the SNES ones, that crushed some of our editors that are not me), but they were popular, and with a more powerful console now capable of creating more fully-realized polygonal worlds, developers started to capitalize on the immense potential of Nintendo’s latest machine with some bigger and better games.

Shadows of the Empire

Smart enough to release close to the N64’s launch but after everyone had finished the amazing Mario 64, this story of a stock action hero/Han Solo rip-off named Dash Rendar remains one of the more memorable games on the system, even if its story is still as foggy to me as the labyrinthine hallways of the Rebel base on Hoth. While the Shadows of the Empire game was part of a larger initiative within the Lucas fold, it was far and away the most popular, simply because no one cared about the overarching plot; some other weird alien wanted to be emperor or something, and Dash, like the lone gunslinger riding into town, was going to help. Nah, this was just an excuse to get him around the galaxy, putting him in the position to shoot at stuff. It was running around these exotic planets, killing storm troopers with blaster, driving a speeder bike, flying a jetpack, and tow-cabling AT-ATs that was really what Star Wars fans wanted.

Never mind that the running around was a little wonky (especially if you had to jump- yikes), that the blaster had an incredibly generous auto-aim, that the speeder bike only kinda worked (and was on Tatooine), or that the jetpack was almost impossible to control; flying a speeder over a snowy battlefield and circling the legs of Walkers was the best sequence in any Star Wars game to date. In fact, after beating Shadows of the Empire, many would actually return just to play the Hoth vehicle stage over and over, ignoring the rest of what was actually a pretty good game for the time; it was that amazing. This popularity led some to wonder why there wasn’t just an entire game based around those mechanics…

Of course, this one was a no-brainer. The concept? Take the one stage of Shadows of the Empire that everyone raved about and design several more just like it, only with a variety of craft this time instead of just a snowspeeder, including  X-wings, Y-wings, A-wings, and V-wings. Who even knew there was such a thing as a V-wing? On top of that, players could unlock the Millennium Falcon, a TIE interceptor, a T-16 Skyhopper (obviously for shooting womprats, which are roughly the size of a Death Star thermal exhaust port, conveniently), an AT-ST, a Buick Electra 225 (?!), and even a Naboo Starfighter. This last was one of the best-kept secrets on the N64, as LucasArts didn’t reveal the code to unlock it until six months after the game’s release, when The Phantom Menace finally hit theaters.

Rogue Squadron, while still suffering a bit from the eternal haze that plagued so many of the system’s games, looked fantastic, and with the N64’s Expansion Pak, which it was one of the first game to utilize, the  improvement in resolution and details was most impressive to those for whom had become accustomed to blurriness. This meant details and textures of the prisons of Kessel or the obligatory (though bonus) Battle of Hoth level popped off the screen, while also showcasing the nice touches developer Factor 5 added, like the ships’ exhaust fumes or Artoo’s exposed position aboard the X-wing, making Rogue Squadron not only one of the best-playing, but also best-looking games of its generation.

A new Star Wars means an opportunity for a host of new Star Wars games, but unfortunately the vast majority of those based upon The Phantom Menace were about as much fun as the politics-ridden opening crawl of their source material. There was a standout, however, and naturally it was based on the most entertaining part of the movie: the pod racing sequence, where despite the number of groan-inducing verbal ejaculations from that pest of a future Jedi, the sheer kinetics absolutely mesmerized. Episode I: Racer attempted to capitalize on this rare positivity produced by the first prequel, and largely succeeded, turning in a sci-fi racer that may not quite stand toe-to-toe with F-Zero X or Wipeout 64, but certainly holds its own.

The game has a great sense of speed (though the blurriness of the N64 textures could make slow-motion look fast), and the action out on the courses is full of twists, turns, and crashes. A decent number of tracks, plenty of characters straight from the film, like the sneering Sebulba and the inept Ben Quadinaros, and a host of vehicle upgrades give the game some depth. It’s also packed with the usual production value, from various music lifted from John Williams’ score to voice samples, many of which are provided by the actual actors. Whether that’s a good thing or a bad one depends on how much you like hearing Jake Lloyd’s forced yells or Greg Proops’ nasal hamminess, but it certainly sets the scene well, and atmosphere is half the appeal of most Star Wars games. Episode I: Racer might not have been particularly memorable without its license, but with reasonably tight controls, enough variety to keep things interesting, and a bar that wasn’t set especially high when it came to its Phantom Menace colleagues, it ranks among the best Star Wars on the Nintendo 64.