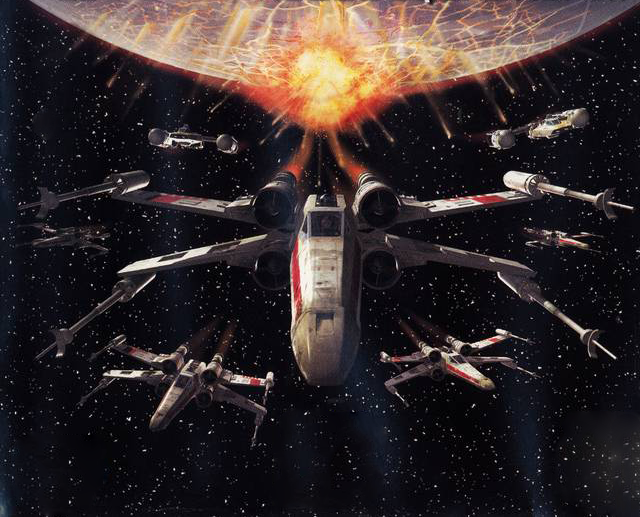 The Gamecube era is a great example of how quality trumps quantity, but unfortunately the makers of the console’s Star Wars games didn’t take that maxim to heart. The franchise was in full production mode during its lifespan, with the prequels in full swing, and developers were salivating to capitalize on the good faith and passion of fans. Though the little purple box saw more titles take place in that galaxy far, far away than any other Nintendo non-portable system (the DS wins overall, with 10), the vast majority of them ranged from less than memorable to barely playable. Normally this wouldn’t make for a good highlight list, but when one of the games on your roster is destined for the Star Wars Hall of Fame, well, we’re back to the merits of quality again.

Hands down the single best Star Wars game to appear on any Nintendo console, Rogue Leader was a system-seller that appeared at the Gamecube’s launch- what a way to kick off a new console! With shiny new visuals and enhanced processing power that was capable of displaying an incredible number of enemies on screen at one time, something close to true immersion was achieved, and finally engaging in the epic space battles that every fan had dreamed of was a possibility.

Paying tribute to the story and settings of the original three movies, as well as filling in some of the gaps in between, Rogue Leader kicks off with a bang, throwing players into the cockpit of an X-wing during the assault on the original Death Star, dogfighting with TIE fighters and plunging into a trench run that culminates in a massive explosion. It’s a breathtaking intro, and the game only gets better from there. The Battle of Hoth looked and felt like the movie, you get to steal the space shuttle Tydirium (which will later be used by Han and Co. in Return of the Jedi), there’s bombing of Imperial prisons (and maybe a few rebel prisoners- sorry), and the game culminates in one of the most intense sequences in any Star Wars game: the fleet attack on the second Death Star and the subsequent race to the core. The scope of that stage was unparalleled at the time, and though games after certainly have been able to surpass Rogue Leader from a technical standpoint, few have managed to equal the sheer awe upon seeing what seemed like hundreds of TIEs, Interceptors, and Star Destroyers bearing down seemingly out of nowhere, just like the in the movie, hundreds of lasers bursting forth all at once. The spectacle was enough to convince a devoted PC gamer friend of mine to pick up his first Nintendo console ever. Check it out below:

Bonus stages included the Millennium Falcon navigating the asteroid field, the Death Star escape, and even an alternate universe where Vader wins during the Battle of Yavin, killing Biggs, Wedge, and Luke! Voice acting peppered throughout (including Denis Lawson resuming the role of Wedge) and superb sound design contribute to the feeling that you are there, and a host of unlockable spacecraft, like Slave I, the Naboo starfighter, an Imperial shuttle, and a convertible car, naturally. Any little touch, any little detail that developer Factor 5 could throw in, they did, and the result is nothing short of magnificent. Star Wars Rogue Squadron: Rogue Leader is without a doubt the Nintendo Star Wars game that most feels like Star Wars, in this or any other galaxy.

Adventure. Heh. Excitement. Heh. A Jedi craves not these things.  Which makes the follow-up to Rogue Leader, Rebel Strike, the perfect game for padawan wannabes. I kid, I kid. Sort of. There is actually some fun to be had here, when the game sticks to its predecessors’ formula, but unfortunately Factor 5 didn’t subscribe to the old “if it ain’t broke, don’t fix it” axiom. For some bizarre reason they ignored why everybody loved Rogue Squadron and really wanted to include land-based stages where the player runs around and shoots stuff. I suppose these levels could have been cool, if they didn’t fall somewhere between the awkward Shadows of the Empire gunplay and Rebel Assault‘s near-lack of control. Instead of providing variety, these clunky sequences elevate blood pressure, and cause memory loss- whatever goodwill was earned through the still top-notch vehicle segments starts to fade a bit.

Still, half the time Rebel Strike is quite an entertaining game, if you have the patience to gut out the excess fat, especially a horrific Endor speeder bike level (has there ever been a good version of this?) that probably is responsible for a large share of destroyed Gamecube controllers. True, the bar was set high, and what could have been great ended up merely acceptable, but when compared to other Gamecube Star Wars titles, that in itself was an achievement.

You could waste time arguing that the first was the best, but this second of what would end up becoming one of seemingly endless Lego-style games is still the king of a series known for its silent, cheeky humor and many references. There’s not a whole lot to say about this (or any) or any Lego game, as they’re pretty straightforward and simple, made for fun multiplayer (with one awesome exception) and appealing to parents of young kids, but hey, it’s still a Star Wars game, so it counts. And it really is fun to team up with a fellow rebel and smash all your favorite locations and recognizable assets into blocky bits.

Lego Star Wars II is cute, adorable, and often even clever in its version of the stories from the original movies. I can’t say there’s a ton of variety, but you do get to pilot vehicles that were the perfect marketing tool to make me want a Lego Millennium Falcon. It’s easy likeability, coupled with weak competition, make it one of the Gamecube’s best Star Wars games.