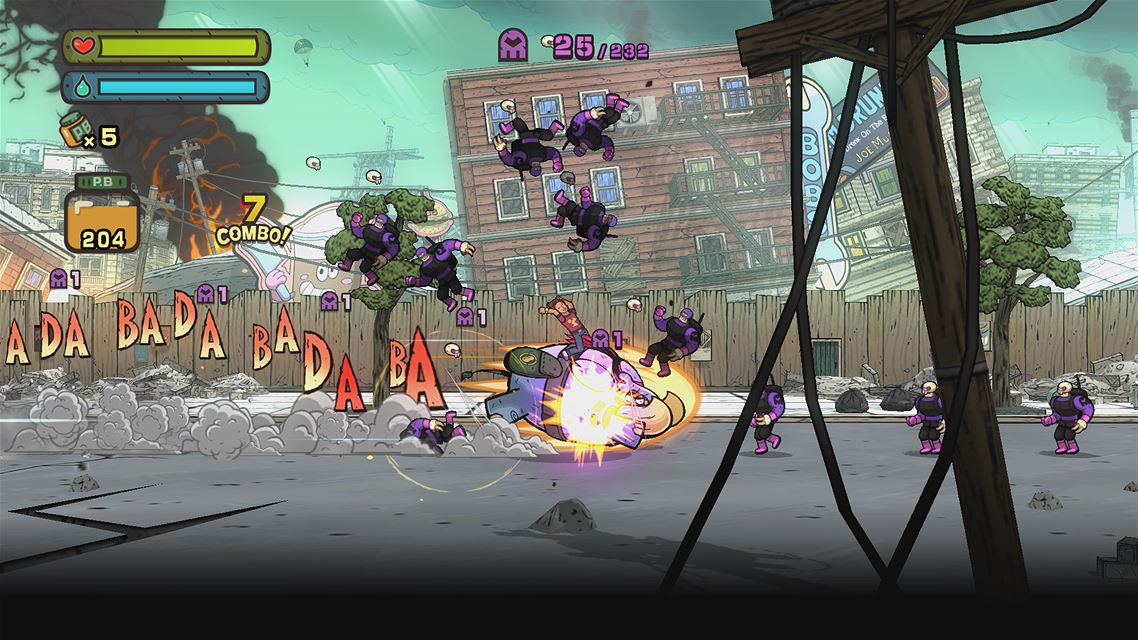 In the many, many (many) retro throwbacks that have appeared over the last decade, there have been a lot of things that have consistently worked toward the success of a title, from the deliberate nostalgic touches to the grueling difficulty curves, to the catchy music that has become such a staple of these type of games. Tembo the Badass Elephant does indeed bring these three standards to the forefront, as expected, but where it really shines is with the sense of joy and silliness that it uses to present itself.

Fans of the SNES will recall just how many games like this were released in the early to mid-90s. Following the breakaway success of games like Super Mario World and Sonic the Hedgehog (one which featured a plumber battling dinosaurs in a world ruled by mushrooms, and the other starring a superspeed hedgehog tangling with robots in a dystopian future) ridiculous concepts in side-scrolling beat-em-ups and platformers became all the rage.

It is this proud tradition that Tembo the Badass Elephant calls upon with a fond reverence right from the outset. In fact the opening of the game features a seasoned general having fond memories of battling enemy troops with Tembo in increasingly absurd situations before calling him for help once again. The scene told wordlessly through flashes of animated stills, ends with Tembo answering a hidden phone in a jungle tree before arriving on the scene.

This sense of whimsy makes itself present in many other touches throughout the game. Whenever Tembo runs, for example, little words appear behind his feet constantly, spelling out the sounds by literally saying “Bada, Bada, Bada”. This spelling out of sound effects appears throughout the game, and is joined by equally goofy ideas like having the civilians you save in each level ride on your back for the remainder of the stage. Having an elephant smash the statue of an evil terrorist organization at the end of each stage is already pretty funny, but having him do it with ten people celebrating on his back pushes it right over the edge, and delightfully so.

On the gameplay front, Tembo plays like the best of its ilk, with precise controls and a challenge that rises steadily throughout the adventure. In another throwback to eras past, this challenge makes up the bulk of the adventure, with the main thrust of the game likely doable in 2 hours or less (I imagine speedruns will be forthcoming once the game is released publicly) most players will spend three or four times that actually beating the game, as just reaching the end of the stage can often be a feat of perseverance, let alone obtaining the prerequisite collectibles required to advance to the next area. If anything will turn certain players off of Tembo, this level of dedication is likely to be it but for those of us who grew up struggling our way through games like Donkey Kong Country (and fighting King K. Rool a good 40 times before obtaining victory) challenges like this are just par for the course.

With insane action set pieces, the sort of gorgeous animation generally reserved for Disney films, and a lot of reasons to smile along the way, Tembo the Badass Elephant is a welcome breath of fresh air for retro throwbacks and a real left turn for a developer like Game Freak (best known for the best selling Pokemon franchise). Let’s hope they’ve got more like it coming our way in the future.