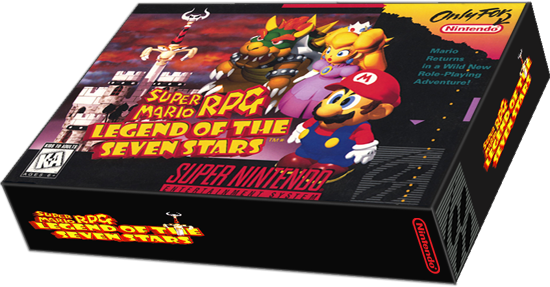 Super Mario RPG Broke All the Rules and the Result is One-of-a-Kind.

In 1996, one of the best RPG game developers in the world teamed up with Nintendo and created Super Mario RPG: Legend of the Seven Stars, one of the most acclaimed games to feature the lovable Italian plumber. An adventure/role-playing title, Super Mario RPG was the brainchild of a corporate collaboration between Nintendo and Squaresoft that nobody saw coming from a mile away. You would think the news would have had fans dancing in the streets but while Square developed Super Mario RPG under direct guidance from producer Shigeru Miyamoto, many fans in the mid-’90s were skeptical that it would be good (I was one of them). But it was, and Mario and the Mushroom Kingdom made the transition to the RPG genre in perfect form. The game was well-received upon release, praised particularly for its 3D rendered graphics and colorful cast. There was nothing quite like it at the time, and so Super Mario RPG became an instant classic, paving the way for two successive RPG-themed spiritual predecessors in the Paper Mario and the Mario & Luigi series.

The first noticeable difference between Super Mario RPG and previous Mario titles is the story. As in most Mario games, the main protagonist is Mario, whose initial goal is to rescue Princess Peach (Toadstool) from Bowser. However, the story takes on an unusual twist: As it turns out, Bowser’s not the villain this time around; instead, he’s a victim. Bowser’s castle is taken over by The Smithy Gang, led by Smithy, a robotic blacksmith from an alternate dimension with a plan to conquer the world. In order to restore peace to the mushroom kingdom, Mario must team up with Bowser and somehow take down the evil Smithy and his minions by collecting the Seven Stars foretold by the legend. While attempting to stop the group, Mario is also joined by Mallow, a cloud boy who thinks he is a tadpole and Geno, a living star who takes the form of a doll.

Super Mario RPG contains the usual locales you come to expect in the genre (towns, dungeons, etc), and players will need to build experience by chatting with townsfolk and fighting numerous enemies along the way. In many ways, Super Mario RPG is a very conventional role-playing game, but in other ways, it is not. Much like Earthbound, Super Mario RPG puts players in control of multiple characters and unlike other role-playing games, there are no cut-scenes. In fact, most of the dialogue and story take place within text windows as various characters converse. One of the more interesting tidbits is that sometimes Mario will morph into other characters, an unexplained phenomenon that is seen at random times. But what really makes Super Mario RPG stand out from other games of the genre, is the gameplay.

Super Mario RPG is one of the unique RPGs for its time. For starters, the core gameplay incorporates Mario’s platforming roots into all aspects of its gameplay. Everything from running through areas while avoiding enemies to jumping around and smashing blocks makes this RPG feel like a traditional Mario game. Another key difference is that the game is presented with a different perspective than any other Mario title. As opposed to scrolling left to right, the game features an isometric viewpoint that displays every environment at an angle and gives Mario the ability to walk or run in any of eight directions. And unlike most RPGs of its time, Super Mario RPG does not contain random battles. Instead, one can see enemies walking around on the overworld and so naturally players can avoid fighting if they desire. As in Final Fantasy or Chrono Trigger, battles play out by selecting options from a menu – you can use a basic attack, or defend yourself, or unleash a special move, or use any of the items you collect. As you win battles, you’ll level up your characters and earn new special moves. And your health, of course, is measured by a numbered hit point gauge. What’s different about Super Mario RPG’s battle sequences is Mario will do more damage with his attacks if you press the attack button a second time, with the right timing. The same goes for defending against enemy attacks. If you press the button at the right moment, the enemy’s attack will inflict less damage or even miss altogether. This unique battle system makes combat fast-paced and engaging. Like Earthbound, you’ll also gain access to new playable characters throughout your journey, each with their own unique talents. All that said, Super Mario RPG does the impossible – here’s a game that makes grinding fun! And if that isn’t enough, a wide variety of mini-games can be found throughout Mario’s adventure. Some of the mini-games are part of the story while other mini-games are completely optional. Platform puzzles, mine-cart races, and riding on Yoshi’s back are just some of the many added bonuses you’ll discover throughout the journey. In addition to the many mini-games, there are numerous side-quests that will reward players with items and equipment that will help in Mario’s adventure.

The visuals in Super Mario RPG push the Super Nintendo console to its limits, and so it’s no surprise the game is among the best-looking games released on the system. The quasi-3D style graphics, vibrant colors, and imaginative locales make everything pop. But the highlight isn’t the gameplay nor the look of the game. The best thing about Super Mario RPG is the killer soundtrack, an audiophile’s wet dream. Yoko Shimomura, best known for her previous work on Street Fighter II, composed the game’s music. As part of the score, she also incorporated arrangements of classic musical pieces from previous Super Mario Bros. titles for added familiarity along with three tracks by Nobuo Uematsu from the Final Fantasy series. The end result is what many fans consider arguably the best Super Mario soundtrack ever created.

Thanks to its clever gameplay mechanics, rich story, nonstop humour, and dazzling graphics, Legend of the Seven Stars is often touted as one of Nintendo’s all-time greatest games. Super Mario RPG broke all the rules and the result is one-of-a-kind. Now if only we could get a sequel!