With oceanic adventures like Skull and Bones and Assassins Creed Odyssey clogging Ubisoft’s booth with streams of players waiting their turn at the helm, striking out into the great beyond seemed to be a theme for the publisher at this year’s E3. While not strictly seafaring, the toys-to-life title Starlink: Battle for Atlas also upheld this expeditionary idea with its space-age open worlds — open galaxy, even — and charted a course to sci-fi adventure. With the freedom to seamlessly travel a vast expanse from planet to planet, scanning some exotic creatures and blowing up the rest, Starlink certainly contains many of the pieces that make up a great voyage, but it remains to be seen if they will be too spread out to snugly fit.

Be it in water or the endless cosmos, any good cruise requires a sturdy craft, and for those who enjoy creating their own, Starlink will provide some extra entertainment. My demo began with choosing from a variety of miniature plastic ship parts laid out in front of the console before me, including hulls, wings, guns, and even the hero that would pilot the Frankenstein’s monster I would eventually create. All of these can be mixed and matched, and kits containing these pieces can be purchased both physically and digitally, so no one will miss out on having that cool missile launcher or purple laser beam they want so badly. (The Starfox kit, exclusive to the Switch version, wasn’t playable at my station, but I did see it later at the Nintendo booth, and it definitely looks cool.) The actual parts feel good in ones hands, weighty and solid, and everything snaps into place quite easily — which is good, as those who opt for the physical versions might find themselves switching in the middle of play sessions for tactical reasons and otherwise (more on that in a bit). They’re also nicely detailed, and what’s in your hand matches very well with what’s on screen.

Once the craft is assembled, it mounts to whatever controller you happen to have (or in the Switch’s case, the Joy-Cons slide onto a peripheral built specifically for this game), and you’re ready to begin. The E3 demo I played put my ship immediately on a path to a nearby planet’s surface, an uneventful trip thankfully made quicker due to a speedy boost. As promised, the transition from space to a more life-sustaining atmosphere proved seamless, and soon I entered the skies above a barren, rocky landscape. From there I was free to go in any direction I chose, but as one who obeys my video game overlords (and at the urging of the eager rep), I set a course straight for the yellow objective marker begging me to follow. 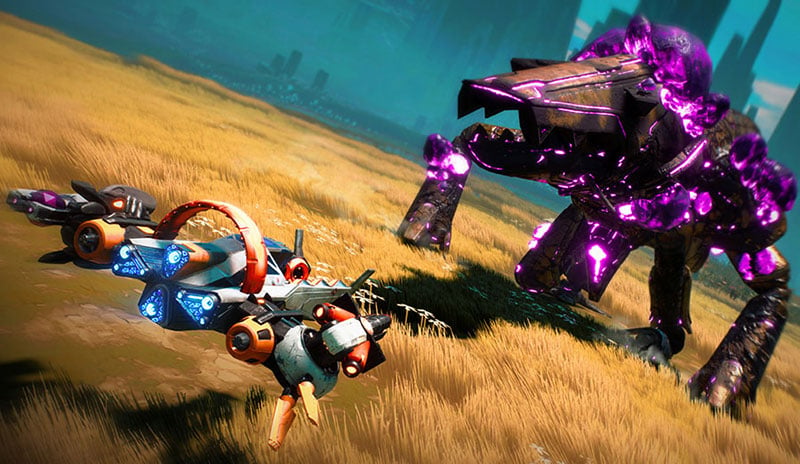 As I cruised across the countryside, I couldn’t help but notice that while pretty, the land wasn’t exactly teeming with life. Every once in a while a small pack of wild creatures might be spotted, which can be scanned by awkwardly locking on and circling them (a procedure more tedious than it needed to be), but other than the Ubisoft rep’s assurance that this mechanic would be utilized for quests, no other benefit was immediately apparent. There wasn’t much else to do, giving travel a similar vibe to sailing from island to island in The Legend of Zelda: The Wind Waker — simply waiting until the objective is reached. This certainly reinforces the idea of a journey, but I couldn’t help but feel that Starlink could have used some more activity; dead space should probably be reserved for…space. We’ll see how it shapes up in the coming months.

After piercing a dense fog that caused my ship’s flight engines to fail, I continued on ground like a hovercraft. Soon I reached an enemy base and the action began. Starlink controls much like a standard shooter, albeit at this point it feels a bit twitchy. Nevertheless, I was easily able to pick off the mech-like alien things sent to stop me, and ultimately destroy the large machine responsible for much of the planet’s atmospheric woes. There are dodges, jumps, and combos, but every once in a while the vehicle would over-thrust, getting me a little more out of position than I would have wanted. As battles rage on, parts of your craft can be damaged, so it will be up to players whether they wish to proceed wounded, or swap in parts from other kits to restore guns and the like. Switching loadouts mid-fight can also turn the tide if an enemy is particularly weak to a specific attack — something apparent on the final mission of my Starlink demo, which saw me take on a giant bug monster in a fun, multi-phase assault that even included a cowardly retreat (by my foe, not me). Turns out missiles do more damage than bullets.

This ability to swap parts around at will holds interesting possibilities beyond just aesthetic preferences, and I’m curious to see what use Ubisoft makes of it. Really, I’m curious to see how Starlink: Battle for Atlas as a whole will be fleshed out. The E3 rep told me that the game will include several planets, a host of sidequests, and numerous RPG elements that should allow for depth and complexity to enter what seemed like a fairly straightforward action adventure. Hopefully, the developers can fill their galaxy with enough variety to keep players interested in exploring these alien lands and prevent premature cryosleep.

Starlink: Battle for Atlas is slated to be released October 16 for PS4, Xbox One, and Nintendo Switch.