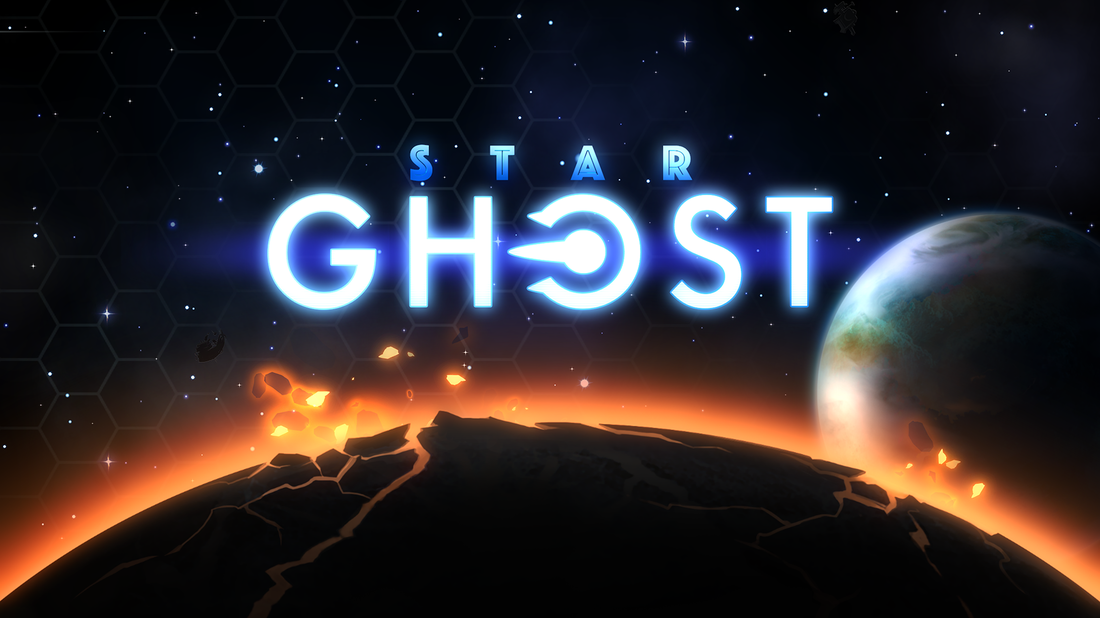 It is hard to believe that some classic genres of gaming are still evolving, but with the release of Star Ghost on the Wii U, Squarehead Studios proves that there is still plenty of room to push the envelope. Founded by an ex-Retro Studios developer, Squarehead’s first console offering provides a fresh and innovative approach to the traditional space “shoot ‘em up” style commonly seen in arcade cabinets. As a whole, Star Ghost combines new controls with old ideas, creating a unique title that feels both nostalgic and new all at the same time. While borrowing heavily from Donkey Kong Country: Tropical Freeze and arcade titles like Gradius and Space Invaders, Squarehead’s title breaks new ground in the side-scrolling shoot-em-up genre, making an eShop indie game that can appeal to older arcade fans, modern indie lovers, and younger gamers alike. 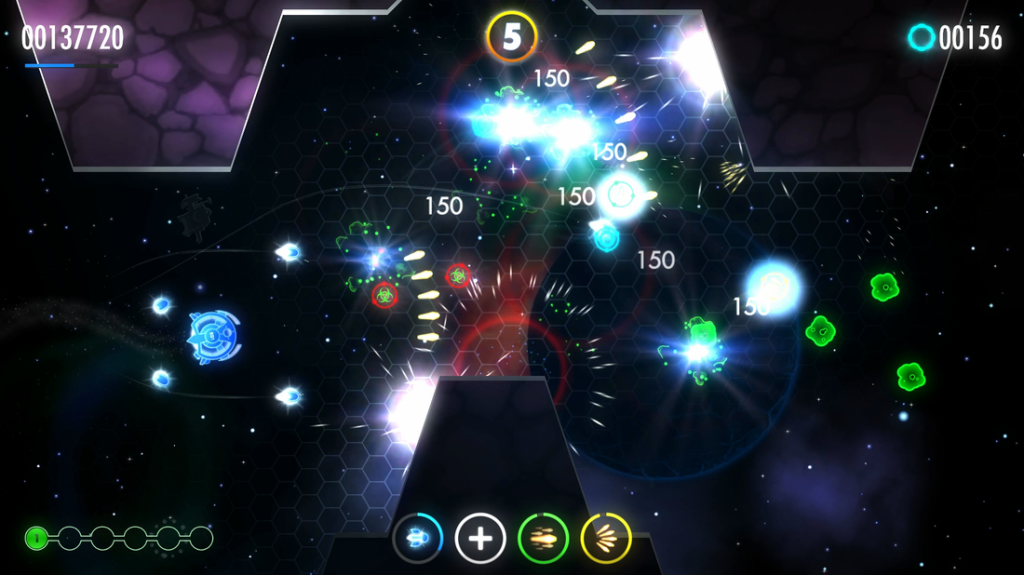 Star Ghost’s controls, which are deceptively simple, is where the title really shines. For those unfamiliar with Tropical Freeze, the game uses presses and releases of the A button to steer the ship up and down while it moves forward at a steady speed. To make matters more interesting, the game then utilizes the left stick to control the direction of the ship’s continuous shooting, forcing players to adjust their angle of fire while maneuvering through a maze of obstacles and enemies.  While this may sound relatively simple to control, it is actually a bit of a classic “pat your head and rub your tummy” type of action, creating fun and tense gameplay that encourages players to multitask in order to survive. Guiding the ship through mazes while aiming the stream of fire is a task that requires patience and concentration, especially while trying to collect power-ups and points. Although it is possible to get relatively far in Star Ghost without actually using this mechanic, the title all but forces players to adopt it in later levels to set high scores. Together, the steering and shooting controls are both fluid and seamless, presenting a simple learning curve that is easy to grasp for beginners yet difficult to fully master for veteran players.

As a whole, Star Ghost is presented in a classic arcade, high-score style format, which is both a positive and a negative for the title. Like any arcade space shooter, Star Ghost starts out easy and works its way up in difficulty, allowing players to get oriented with its pace. Weaving through mazes, blasting through enemies, and maneuvering through asteroid fields sums up the experience, and the game does a great job of varying the action so that none of these elements becomes repetitive or stale. Star Ghost also mixes levels up by randomly introducing small changes in level design with each playthrough, confusing players who tend to rely solely on memorization. That being said, after reaching the intensity presented in later levels, starting over with the slower introductory ones can feel like a bit of a chore for those who want to continue progressing. Without a free-play mode that allows players to try their hand at some of the game’s tougher challenges, Star Ghost forces players to either return to the start or give up completely, just as an arcade cabinet would. 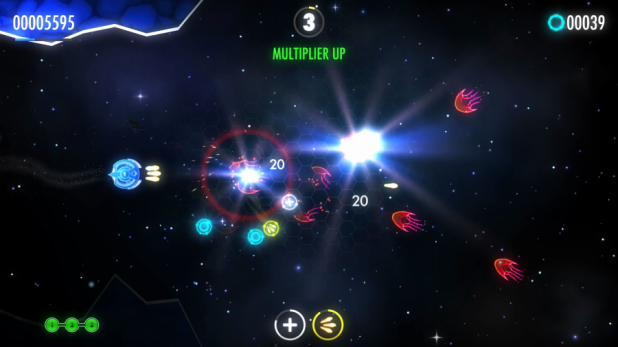 Unfortunately, while Star Ghost’s nostalgic high-score emphasis fits the retro mold of the space shoot-em-up arcade genre, the game only offers computer-set high scores for players to beat. Although perhaps contrasting with the retro vibe, an online leaderboard would have increased replay value and created more player interest. Striving to achieve the number one spot against a pre-programmed score is fun, but only for a brief period of time. Working to become a top rated player in the world is what really encourages fans to become emotionally invested in a title, which would have allowed for a bit more longevity.

Despite these setbacks, Star Ghost’s soundtrack, created by legendary producer David Wise, and the game’s lighthearted visuals help to create the perfect space shooter ambiance. Although different from his work on the Donkey Kong Country franchise, Wise’s soundtrack features catchy, bright synth tones and drum rhythms that will have players humming along while blasting their way through space enemies. Although these tracks are relatively small in number and played on a loop, they never really become stale as the game progresses. The visuals are simple yet effective, looking stylistically clean and sharp. The enemies are bright and colorful against the space background, and the edges of mazes bring back nostalgia of older side scrolling space adventures. While it may not be the most technologically impressive game on the eShop, Star Ghost’s simplistic style is not bogged down with over-rendered clutter or elaborate, distracting character design, presenting instead a crisp and clean modern, yet retro, aesthetic. 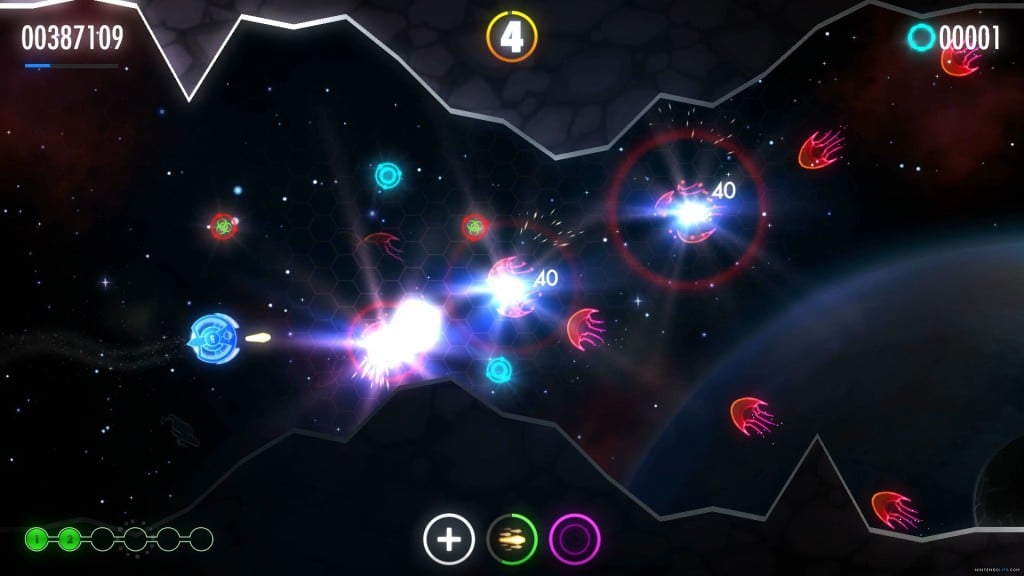 Ultimately, Star Ghost, even though it is missing an online leaderboard, is an original and inventive take on the classic horizontal side scrolling shoot-em-up arcade genre.  As long as players remain invested in the computer-set leader boards, Star Ghost will provide a decent amount of entertainment, making it a worthwhile investment for those who want a game that is easy to pick up and play. As a whole, Squarehead’s title does a great job of incorporating the retro roots of its side-scrolling predecessors while still providing an innovative control scheme that moves the genre forward, eliciting vintage nostalgia while keeping players on their toes. This gameplay combines with Wise’s soundtrack and the simplistic yet stylish visuals to create an experience that would be a great addition to any Wii U digital collection, and is definitely worth checking out.