Sonic Mania is the most exciting game of 2017! Granted, such a bold statement only ‘rings’ true (pun intended) based on one’s own fondness of the blue blur. If you prefer to give a wide berth to anything Sonic related, then Sonic Mania more than likely is far from ‘the most exciting game of 2017’. If however you have followed the franchise passionately from its stellar 1991 Sega Mega Drive/Genesis origins, all the way to its significantly less than stellar (a gross understatement) Sonic Boom: Rise of Lyric in 2014, you will be no doubt buzzing with excitement at the love letter to fans that is Sonic Mania! 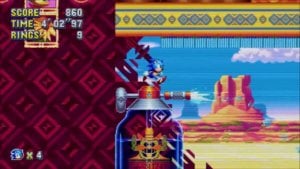 Said fans have witnessed first hand the Sonic franchise through its high and low points. It started as a stupendous endeavor in platforming gaming in the form of such titles as Sonic the Hedgehog, Sonic & Knuckles and Sonic CD. Eventually, it advanced to the technically flawed but overwhelmingly charming Sonic Adventure and Sonic Adventure 2. Finally, it progressed to the disappointingly mediocre Sonic Unleashed and Sonic Lost World. This ‘disappointingly mediocre’ category is where many of Sonic’s outings have resided for quite some time now, with the best of them still only achieving a ‘yeah, it’s pretty good’ status. It is for this reason that fans are staring at Sonic Mania with wide eyes, as it has the opportunity to be the first truly excellent, or even close to perfect, Sonic game in over 20 long years. This potential redemption of a long running and iconic franchise is nothing short of stomach spinning excitement! 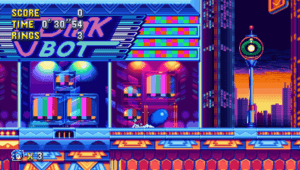 Truly, one of the most fascinating things about Sonic Mania is its development team, which includes Christian Whitehead, Simon Thomley (the two responsible for the well respected mobile device ports of classic Sonic titles), and Tee Lopes (who’s YouTube account is filled to the brim with re-imaginings of iconic Sonic music), to name but a few. With this in mind, even the most dedicated fans can breath a sigh of relief, safe in the knowledge that Sonic Mania is being passionately crafted by talented individuals that adore Sonic just as much as them (if not more so). Being by far the largest project that they have ever undertaken up until this point, the development team could launch their careers from the potential success of Sonic Mania, so it can be assumed that they will take extra care to make it as polished as can be.

All of these points aside, there is still one factor that truly solidifies Sonic Mania as the most exciting game of 2017, and that factor in question is that Sonic Mania looks dazzlingly jaw dropping! From the creative level design to the infectiously catchy music (that easily stands tall against the best of the franchise), everything about it seems to scream “This is it, this is the game that is going to truly fix Sonic”. It has the potential to be the comeback story of the decade within the world of gaming, and we can sincerely hope that Sonic Mania marks the redemption of a fallen hero, climbing out from his 5/10 review score filled ditch, and back into our hearts as a gaming treasure!