Some games tread the line between being games and being experiences.  Abzu and Flower didn’t offer much in terms of gameplay, but they didn’t necessarily need to in order to get their point across. While Solitune falls quite short of those titles, it does occupy the same artistic space. There’s not so much a narrative here as there is a sense of progression, and there’s very little gameplay to be found at all. Players begin in a dull, dimly lit office surrounded by the ring of phones and clacking of keyboards. The game’s protagonist is a businesswoman who, after realizing how miserable she is wasting away at an unfulfilling job, decides to leave and the player then embarks on a short journey exploring different rooms and meeting a variety of characters.

Solitune is primarily a point-and-click adventure game with light puzzle elements. As players go from room to room they must solve simple yet intuitive puzzles before being able to talk to that room’s inhabitant. The puzzles themselves are nothing to write home about, but the themes brought up by the characters are something else entirely. These range from hopelessness to loneliness, and players quickly find out that they aren’t the only one feeling completely overwhelmed by work and the world in general. One character complains about seeing nothing but war, crime, and pollution when he turns on the TV, while another screams in frustration at you for simply talking to them. These conversations are well written (aside from a bit of spotty translation) and do a great job of making players care about the rooms’ occupants.

The spectrum of issues explored here is where Solitune shines. At its best, the game combines visual storytelling and narrative to make some subtle, poignant points about society’s hold over people. In one such instance, players come into a room where a well-dressed woman is curled up in a ball on the ground, a giant hollow computer monitor with a tree growing out of it behind her. Work binders are scattered all about, and the player has to gather all of them into a pile to be able to talk to the woman. After they’re cleared up (and set ablaze) the woman gets up and mocks you, making fun of your clothes and looking down on you for not having a clear cut goal in life. Though frustrating, the lesson is clear; someone’s outward appearance doesn’t always reflect how they’re feeling when no one’s looking. It played out in such a way to elicit pity instead of anger and was easily one of the strongest moments in the game.

Unfortunately, the vast majority of interactions never make it this far. Everyone that you interact with, though unique, ends up feeling incredibly one-note and even unfinished in some cases. One character learned to deal with his loneliness through music and offers to play you a bunch of songs, but never does. Another woman is completely hooked on being fit and offers to teach you some exercises but, again, she never does. Despite these flaws, Solitune still manages to bring up some key topics and provide a candid view of the struggles so many people deal with. 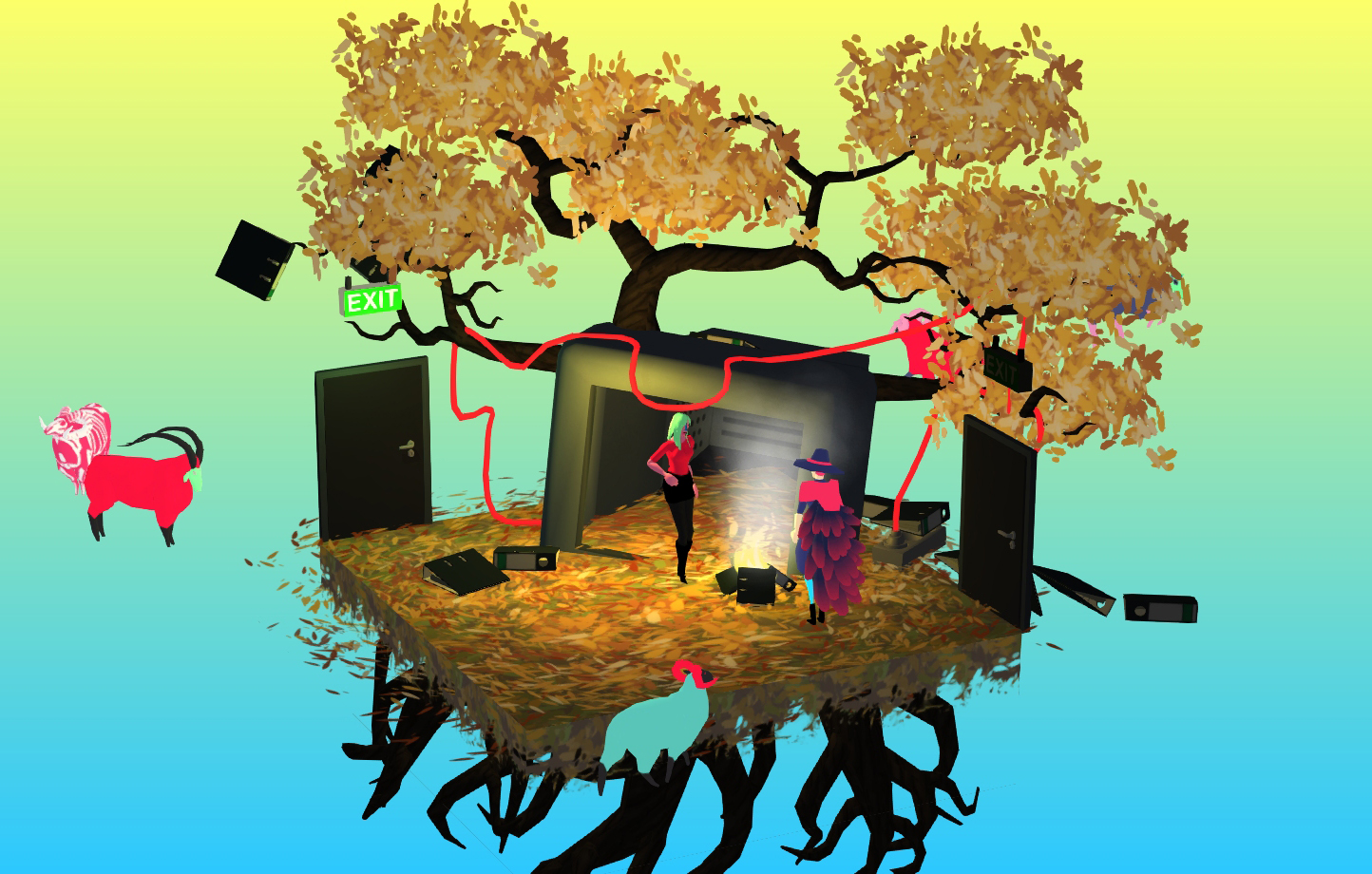 All of these characters need to be saved in some way, and it’s up to you to act as a literal shepherd and guide everyone away from their troubles. After solving each puzzle and having a conversation, the room’s occupants decide to tag along with you as you move onto the next stage. As you transition between stages you’ll find that there’s not a person following you, but an actual sheep. These sheep wander around the edges of the levels for the rest of the game, each “baa-ing” and standing out with a variety of colors. The protagonist even picks up pieces of a shepherd’s outfit over the course of the game, adding a nice visual element to the mix. The concept is a fun one, though some may get annoyed by the sounds of the sheep and mildly disturbed by one sheep sporting a rather unsettling “skinned” look.

What Solitune lacks in depth of characters or fully fleshed out ideas, it makes up with its soothing, zen-like design. The game’s textures and character models aren’t going to win any awards, but the vibrant yet delicate color palette and soft watercolor art style give it a beauty all its own. The puzzles are more cathartic than challenging, and they all revolve around an overarching narrative of technology vs. nature. This leads to some beautiful moments as players overcome technological interference and cause leaves to bloom and roots to grow. The adaptive soundtrack only adds to this. Distorted and chaotic sounds descend upon you in the beginning before gradually giving way to soothing, ethereal soundscapes as you make your way further from the darkness and chaos of society.

Solitune is slight but enjoyable. One could finish the entire thing in about 30 minutes if they rushed, though I got about 45 minutes out of it just enjoying the atmosphere and delightfully relaxing music. The ending leaves room for a bit of interpretation just like the rest of the game, and by the end, I felt quite satisfied with it all. Expanding upon the room-hopping formula and delving deeper into the troubles of its characters could’ve pushed Solitune to the heights of masterpieces sharing a similar aesthetic. For what it is though, there are much worse ways to spend half an hour.