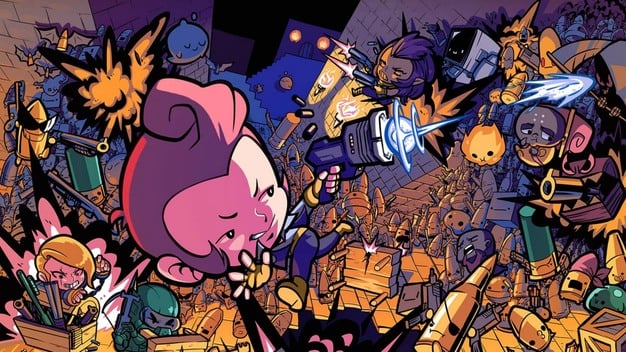 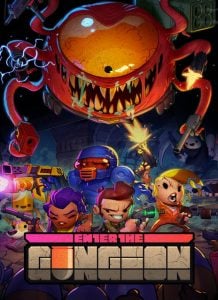 What do you get when you cross twin-stick shooters like Smash TV with the randomized level creation of Rogue and a bestiary straight out of Dungeons and Dragons? The answer is Enter the Gungeon, the long-awaited rogue-like-shooter from Dodge Roll Games and publisher Devolver Digital. Is it a dungeon worth delving into, or a bullet straight to the head?

There’s not a whole lot of plot to EtG, save an intro cutscene explaining that the Gungeon magically appeared one day and is said to house a gun that can “kill the past”. You’re then given the option of four heroes, each with something in their past that they want dead, and provided an elevator into the Gungeon itself. Other than that, there are small bits and pieces of lore, like constant allusions to something called the Hegemony that seems to rule the world outside, and various characters you meet will have short backstories, but overall EtG is fairly story-light.

That’s fine since EtG‘s gameplay carries the experience more than enough for the lack of a plot. The name of the game here is shoot and scoot, as you’ll need a steady trigger hand and even steadier dodge timing to make it through the titular dungeon. The screen is usually filled to the brim with projectiles, both yours and your enemies’, and each room quickly becomes a hectic nightmare of shooting and moving as you attempt to clear it. Wipe out all the enemies in a room and the doors unlock, letting you continue to explore the randomly generated dungeon floors searching for treasure, shops, and the floor’s boss battle. 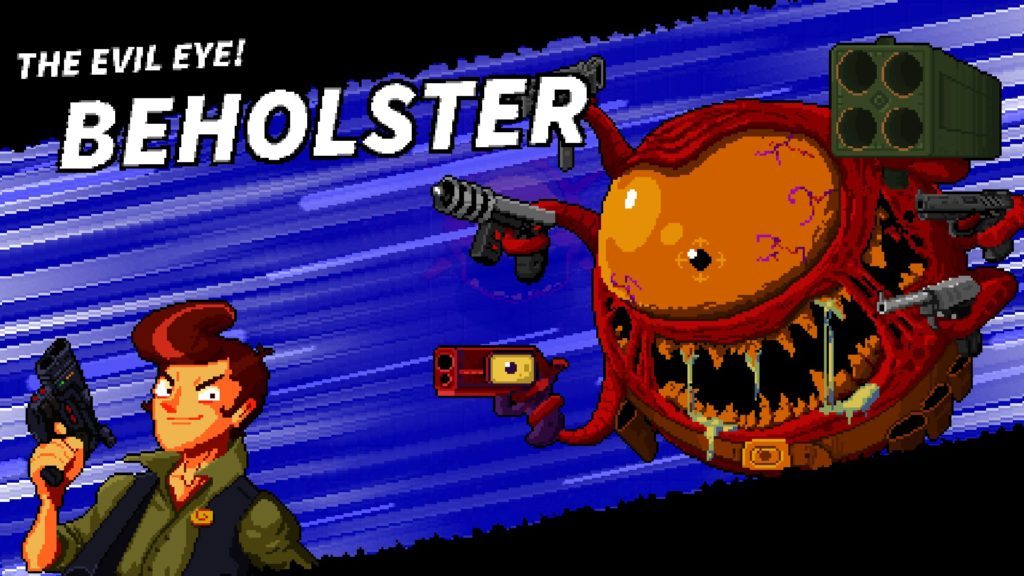 Bosses all come with info cards to preview the horror.

Controls are purposely kept simple. There are aiming and moving, both of which feel fluid and precise. Other than that there are shoot, reload, use item, and most important of all, dodge. Controls take a little getting used to on the gamepad where shoot and dodge are on the bumpers, with item use mapped to the bumpers rather than triggers, but you get used to it fairly quickly.

Since it keeps coming up, let’s talk about dodging. It’s probably the most important part of EtG. While the comparison sickens me, like Dark Souls before it, EtG focuses on the challenge rather than rampant difficulty. Dodging gives you a few scant frames of invincibility, just enough to avoid enemy fire or get out of an environmental hazard. To master dodging is to master EtG, and getting the timing right is required for victory, especially against the bosses.

It’s not all great shooting and dodging bullets, unfortunately. There are two major mistakes that EtG makes. First is that there’s almost no proper difficulty scaling. Each level introduces tougher and tougher enemies, but weapon and supply drops don’t scale at all, meaning you can find the same weapon on floor 1 as you do on floor 4. While this does mean you can get a super powerful weapon on floor 1, more often than not it means you’ll get mundane weapons on level 4.

That leads into the second issue EtG has: there’s really no depth to it. There are a few secrets to find and unlockables you can earn by taking down bosses, but the game never really evolves past its simple premise. Contrast that with other games like Rogue Legacy‘s huge network of upgrades or the various gameplay modes and modifiers of The Binding of Isaac: Rebirth, and EtG just feels a little shallow at times. The only motivation you have to go deeper is your own willingness to see what the next level offers, and if you find the gameplay repetitive within two hours it doesn’t get much different by ten. 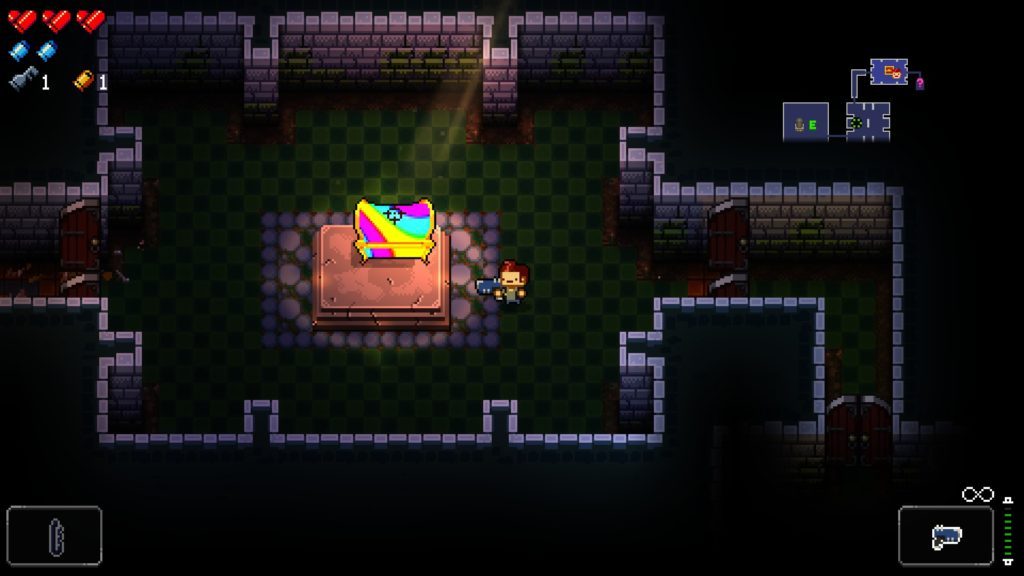 There are secrets hidden in the Gungeon, as long as you can survive.

It’s also worth mentioning the challenge of the game. This isn’t a detraction from the experience, or at least shouldn’t be since EtG skews more towards fair challenge than just artificial difficulty. The randomized nature of both the rooms you enter and the enemies spawned can sometimes mean you clear a massive room in no time, or a small hallway becomes your personal bullet hell. Bosses are a particular challenge with almost every boss featuring an attack that just fills the room with projectiles, but the game balances this by giving you “Blanks” that you can activate to clear the screen for a few seconds. Each floor gives you two Blanks to start, and more can be bought or found throughout.

In terms of visuals, it’s mostly what we’ve come to expect from Devolver—that is, pixelated art that’s way too good to be 16 bit, but still has that old school charm to it. The animation is fluid and there’s a great attention to detail in every little thing. It’s awesome to clear a room and take a moment to appreciate all the slain foes, scattered trash and piles of shell casings lying around, scattered monuments to your victory.

Design-wise EtG is fantastic. There are dozens upon dozens of weapons, ranging from the mundane, like the AK-47, Makarov pistol, or M16 rifle, but the real stars are some of the game’s more outlandish guns, many of which are references to other games or pop-culture. There’s the wind-up laser rifle from Futurama, Deckard’s revolver from Blade Runner, the Klobb from Goldeneye 64, or the Alien Rifle from Halo. Then there’s the downright weird, like firing mail from a mailbox, a super-pressurized water pistol, or an anvil cannon, to name a few. Best of all, you can hold an unlimited amount of guns at the same time and a diverse arsenal is recommended to delve deeper.

Of course, what good would guns be without something to shoot them at, and here we see EtG’s enemy roster, featuring shotgun-wielding shotgun shells, high-caliber rifle rounds aiming sniper rifles, twisted mages flinging magic, and several variations of living ballistic gel. There are knights that fire wide arcs of magical attacks, living iron maiden torture devices, and a machine-gun wielding grim reaper. Never mind the bosses, with enemies like a mini-gun toting seagull, a giant snake that turns each portion of its body into weapon turrets, or Medusa holding twin Mac-10s. It’s like a beautiful mashup of Dungeons and Dragons, Saturday morning cartoons, and a Texas NRA gun show all at once. 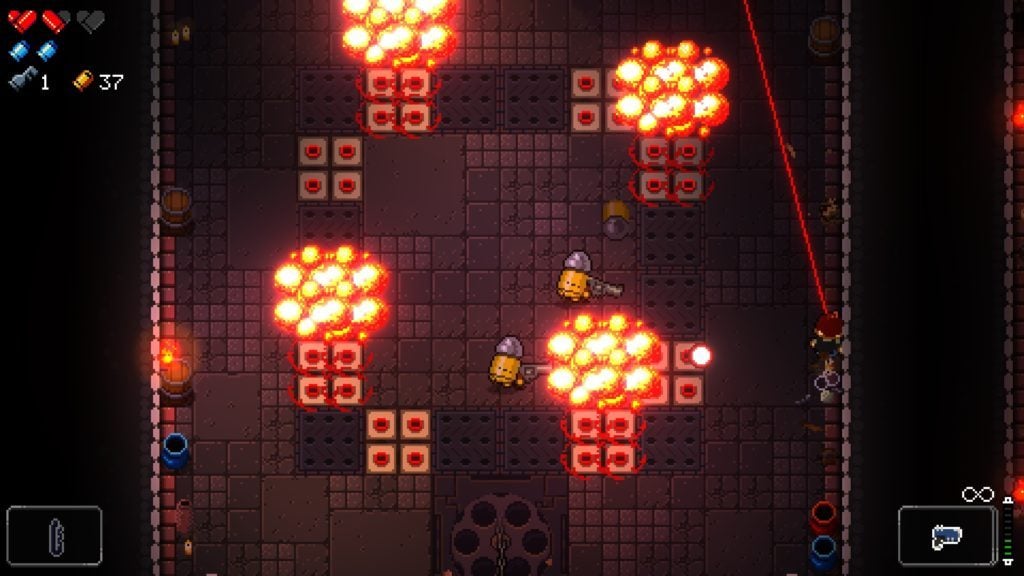 Later levels add environmental hazards to try and kill you

Like the visuals, audio is mostly what we’ve come to expect from Devolver. Music and sound effects more than make up for a lack of voice acting, and you probably won’t even notice. The soundtrack is amazing, with catchy tunes that flow into one another flawlessly, changing as you move in and out of combat. They have a certain charm to them that works even after hours of continual listening, and I found myself humming the songs well after turning the game off. It’s not the next Hotline Miami or Bastion, but it certainly adds to an already great experience.

Your enjoyment of Enter the Gungeon will depend on two things: first, your tolerance of bullet-hell shooters, and second, your tolerance of randomized dungeon games. While it might not have the depth of The Binding of Isaac or the constant motivation of Rogue Legacy, there is a lot of fun to be had with EtG, and if you just need to kill a few minutes (or an entire afternoon) this is definitely one of the better ways to do it.