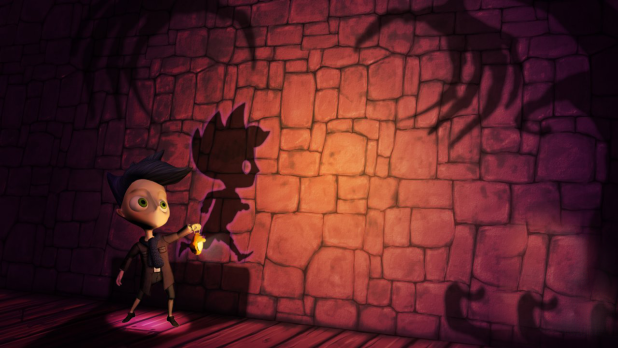 Those poor living shadows, moving independently from the body casting them and striving toward a very understandable pursuit of freedom, seem to always get cast as the dark villain in video games, an evil twin of sorts, destined to end up on short end of the hero’s sword. With its new puzzle game, Shadow Puppeteer, Norwegian independent developer Sarepta Studio hopes to cast some light (but not from too many directions) on our under-appreciated silhouettes, showing a more lovable and helpful side of their otherwise creepy, stalking nature.

The game starts off with a bit of story that shows a young boy waking one night to discover that a sinister old man with a crank-driven music box (the instrument for weirdos, apparently) is stealing the townsfolk’s shadows, but before he can finish the job the music box breaks, leaving our little protagonist and his murky alter ego still a team, their job now to track down the robed shadownapper and save the town from the horrible fate of…not having any shadows. 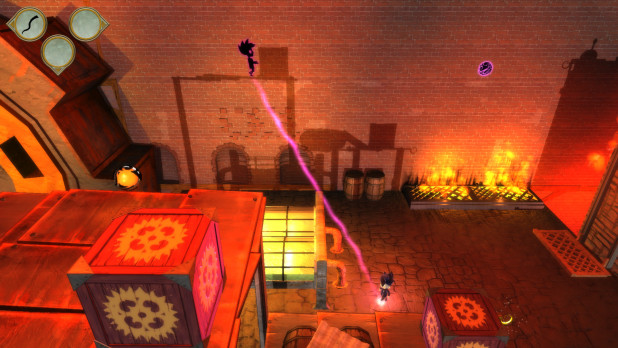 Shadow Puppeteer‘s puzzle-platforming gameplay fares much better than its throwaway plot, especially as a couch co-op experience. One player takes control of the boy, who can naturally move in the 3D space like a real person would, while the other assumes the role of his shadow. This 2D entity must stick to the dark profiles cast from various objects around the room, running along shadow bridges, interacting with shadow levers, and jumping from shadow boxes. By working together and combining their abilities to navigate distinct areas of the many stages, the two can overcome all the obstacles put in their path.

What this makes for is two unique styles of play and some very creative puzzle solving built around playing with objects in the light. If the shadow needs to reach higher ground but the shadow box he’s jumping from isn’t high enough, the boy can simply pull the actual box toward the light source, which then causes the box to cast a bigger, higher shadow.  While a thin rope strung across a ravine may seem impassable to the multi-dimensional boy, for his 2D shadow it’s a perfectly good platform to run across. Because of the different gameplay styles for the two characters, it’s fun figuring out with a friend how best to proceed, and the physics of playing as the shadow delivered wispy shades of that discombobulating “aha!” feeling when running around in Super Mario Galaxy for the first time. Don’t get me wrong – Shadow Puppeteer‘s physics aren’t in the same league or as mind-bendingly clever as Nintendo’s use of gravity in its classic masterpiece, but that it can evoke even a sliver of that satisfaction upon figuring out how things work is compliment enough.

Along the way are upgrades that grant different powers, such as bombs or a pair of scissors (it makes sense, trust me), but unfortunately they’re not used with as much imagination as other elements in the game. Along the journey, players are taken through a number of standard video games settings, from exploring fiery caves to climbing a creepy castle tower, though the visuals of these, while nice enough, don’t contain the rich atmosphere of other indie puzzle titles. 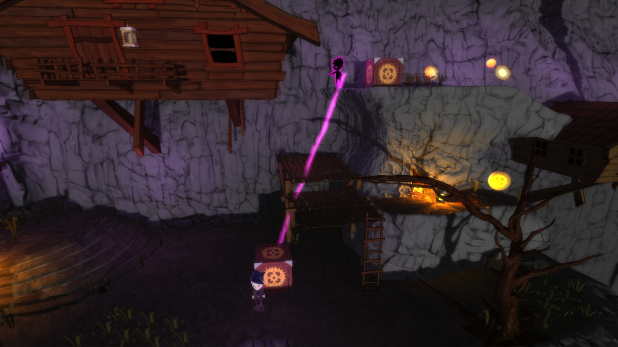 The controls are also little stiff, so segments involving heavy platforming or an auto-scroll don’t have the same appeal as the more relaxing puzzle rooms, but the game is very generous with checkpoints (one of the improvements made for the Wii U version), and so things never get very frustrating either, even the numerous deaths caused by 3D disorientation, wandering too far from each other, or lack of a shadow platform to land upon. Puzzle pros may also find Shadow Puppeteer a little short, but my time spent was thoroughly engaging, and with a few collectibles hidden and scattered about (which don’t do anything for gameplay, but unlock some artwork and music), there is some reason to go back and replay certain stages.

While the game can be played alone, with each analog stick controlling the two characters, it tends to be too much to handle at times, and the nice, stress-less enjoyment of solving the game’s puzzles can start to get on one’s nerves when control of characters must be juggled during moments that require some precision and timing. Playing with a friend is the real draw, and definitely the best way to experience Shadow Puppeteer.

Originally released for PCs back in 2014, Shadow Puppeteer has come to the Wii U with some clever puzzle solving for fans of the genre, and is a pleasant enough way to spend five or so hours with a like-minded friend.

Unless one of us accidentally jumps the wrong way off a cliff because we weren’t paying attention, of course. Sorry, buddy.